In Belarus, Repression Continues Despite Warmer Relations with the West

The diplomatic thaw between Belarus and the West strengthens the regime of Alyaksandr Lukashenka, not the sovereignty or rights of the Belarusian people. 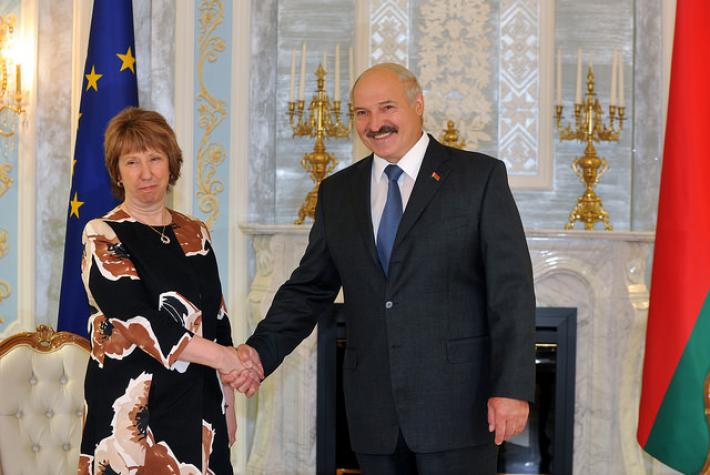 The conflict in Ukraine that began last year provided Belarusian president Alyaksandr Lukashenka with new space for political maneuvering. Russia’s threat to international peace and security changed the perception of the Belarusian regime. Compared with the challenges and risks in Ukraine, Belarus is now viewed as an island of stability and reason, albeit visibly subdued by long-standing authoritarian practices. The United States and European Union (EU) have softened their criticism of the human rights situation and taken a series of steps to normalize relations. Lukashenka, however, remains true to his repressive policies.

Russia’s asymmetrical response to the ouster of authoritarian Ukrainian president Viktor Yanukovych in February 2014, especially its annexation of Crimea and instigation of armed hostilities, raised grave concerns around the world. Lukashenka, more than others, senses the danger of Russia’s new policies. Moscow views Belarus just like Ukraine: as a breakaway nation whose independence is temporary. Lukashenka’s loyalty to and dependence on Russia makes him a less urgent target for the Kremlin, but this relationship also makes Belarus easier to annex.

Lukashenka maintains a fairly balanced position on the Ukraine conflict. He says and does what Russia, Ukraine, and the West expect of him, even when it requires contradiction. In March 2014, still early in the crisis, Lukashenka formulated his public stance on the annexation of Crimea: Ukraine must be indivisible, but Crimea already belongs to Russia—that fact cannot be changed—and Ukraine shares the blame for the annexation.

Since then the Belarusian president has adhered to this ambiguous position. Belarus voted against the UN General Assembly resolution in support of the territorial integrity of Ukraine. Yet Belarus did not formally recognize the annexation, and Lukashenka managed to establish friendly relations with the new government of Ukraine. This week he went so far as to call for greater U.S. involvement in the peace process, telling Bloomberg News that “without the Americans, there can be no stability in Ukraine.”

Lukashenka also stresses that Belarus does not belong to the “Russian world.” This vague and controversial concept is meant to embrace all the lands that used to be occupied by Russia, even if they are now independent, and even if they do not see themselves in this light. The Kremlin never publically criticized Lukashenka’s dubious stance on the conflict in Ukraine. However, in recent months the chauvinistic media outlets of Russia, such as Sputnik, have turned to Belarus. They question the territorial composition of Belarus and the national identity of Belarusians, and criticize sporadic attempts to increase the use of the Belarusian language.

Minsk hosted talks on the resolution of the Ukraine conflict and was praised as a peacemaker. Belarus does not have a seat at the negotiation table, but it allows the Russian-backed militants to come to its soil for talks. This is what makes Minsk’s role so valuable. Recognizing this unique contribution and seeking to uphold Belarus’s relative neutrality, the United States and the EU took a series of steps to improve relations. They included meetings on a high political level, removal of sanctions, and revived trade.
The West also muted its criticism of the human rights situation in Belarus, even though Lukashenka continues to suppress fundamental rights and freedoms and consolidate the dictatorship.

The situation of human rights

Current conditions for the activity of opposition political forces, civil society, and human rights defenders in Belarus are very difficult. The absence of the rule of law and an independent judiciary exacerbate the situation.

There are six well-known political prisoners behind bars. One of them is Mikalai Statkevich, a presidential candidate in 2010, who has been imprisoned since the night of the election. Lukashenka dismisses all calls to release political prisoners, not to mention their rehabilitation. It might be that a candidate from the previous presidential election will still be imprisoned by the time of the new election, expected in the fall of 2015. This has never happened in Belarus, reflecting Lukashenka’s growing disdain for the political opposition.

Lukashenka continues to strengthen the framework of his authoritarian system. In a further attempt to tighten its grip on the flow of information, the government introduced amendments to the Law on Mass Media that came into force on January 1, 2015. The new restrictions make it easier to block any undesirable internet sites. In keeping with the traditions of Lukashenka’s regime, the law was adopted without any public discussion or input from civil society or independent journalist organizations.

To add to the effect of the new law, the authorities in December 2014 undertook a massive blocking of popular and independent online media outlets. Several days later the ban was lifted without explanation. It appeared to be a display of force and a field test of the authorities’ methods for blocking access to independent sources of information.

The conflict in Ukraine pushed Lukashenka to introduce amendments to legislation on martial law. The law, as of February 1, 2015, includes a new toolbox to restrict political rights and freedoms in a system that already has very little space for independent thinking and action. In particular, if martial law is declared, parliamentary and presidential elections as well as referenda cannot be held as long as it remains in effect. Therefore, the powers of the sitting president and parliament are extended until martial law is lifted. The law also prohibits any kind of protest and severely restricts the flow of information. The state can violate the privacy of citizens at will, arresting and searching them without any authorization from a prosecutor or court. Also, the law exempts security personnel from responsibility when using deadly force.

A looming economic crisis is pushing the government to explore other extraordinary ideas. Currently, it is preparing to introduce a presidential decree “On preventing social parasitism” that would levy a special annual tax on those Belarusians who for various reasons do not work and/or do not pay taxes. The main grievance of the government is that such people do not pay taxes but use social services like education and health care. At the same time, the tax is designed not just to extract money, but also to force “social parasites” to start working. It is not clear how the government defines “social parasites.” The public does not have access to the draft decree and cannot participate in deliberations on its content.

Amid the conflict in Ukraine, growing economic troubles, and Russia’s unpredictable behavior, Belarus is preparing for its presidential election. The opposition has not recovered since the crackdown after the 2010 election. It is illustrative that seven months before the planned vote, the opposition forces cannot agree on a strategy to challenge Lukashenka. It is not clear who will participate in the campaign, whether there will be a single opposition candidate, or whether the opposition will boycott the election.

Events in Ukraine have simultaneously inspired and confused the democratic forces of Belarus. The 2014 protests were an example of a successful popular uprising against a corrupt regime. But Russia subsequently proved that it would stop at nothing to disrupt Ukraine’s choice of a European future.

In the minds of many in Belarus, similar protests against Lukashenka’s pro-Moscow regime would inevitably lead to Russia’s direct interference, possibly military, and eventually to the loss of independence. The Belarusian opposition is debating whether it is a sound idea to challenge Lukashenka at all when the nation should be uniting in the face of looming Russian aggression.

Moreover, election strategy demands that the opposition forces distance themselves from the Kremlin and Russian funding sources as far as possible. Before the 2010 election, some candidates sought support from Kremlin circles to enhance their standing and improve finances. This year such connections with an aggressive power would be seen as extremely controversial.

Lukashenka has proved over nearly 21 years that his ultimate interest is to stay in power indefinitely. This time, in order to defend his seat, he should be concerned about Russia’s possible actions, not the opposition. But Lukashenka cares about the sovereignty and independence of Belarus only so long as they coincide with his personal interest. It was his policies that brought Belarus to its current extremely precarious and vulnerable position of profound dependence on Russia and lack of foreign policy alternatives.

An analysis of the recent changes in foreign policy and continued domestic repression leads to the conclusion that Lukashenka wants to outlive the crisis without dismantling his power model, which has served him so well. The new approach of the West offers him enough space to gain political points while keeping civil society and the opposition in check.

There is no doubt that helping Ukraine to defend its statehood is an urgent priority for the West. But this priority could overshadow the prospect of a democratic Belarus. Moreover, it is not obvious that this new diplomatic approach would actually help Belarus to withstand Russian pressure and preserve its independence. The resilience of Belarus requires reengagement between state and society. The international reengagement with Lukashenka, who refuses to change, strengthens his regime but not the nation.

Valery Kavaleuski, founder of the Belarus Politics blog, served as a Belarusian diplomat from 1998 to 2006. He is a graduate of the Master of Science in Foreign Service Program at Georgetown University and a member of the Belarusian-American Association chapter in Washington, DC.