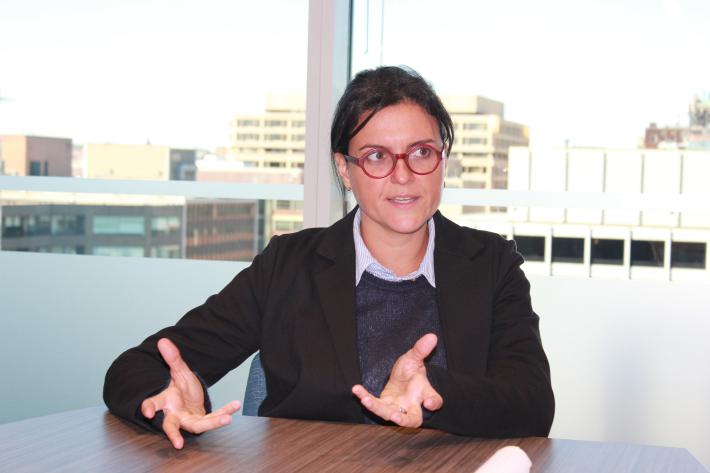 The following interview with Rayma Suprani—a cartoonist known simply as Rayma who was fired by El Universal for satirizing the Venezuelan government—was conducted by Freedom House during her recent visit to Washington.

Venezuela is considered a Not Free country, according to Freedom House’s annual survey of press freedom around the world. Do you agree with this assessment, and if so, why does the situation for the media and journalism in Venezuela merit such a classification?

I agree with the classification of Venezuela as “Not Free.” In fact, I am collateral damage of the lack of media freedom. I have been attacked for expressing my opinion and criticizing the government. The Venezuelan government is what I call one of the “new dictatorships” which, in the contemporary world, now arrive through elections. Once these regimes come into power, they start modifying the constitution, eroding the rule of law, and weakening fundamental liberties. In fact, anything I say here may have consequences there, and this is further proof that Venezuela is “Not Free.”

Can you explain what happened following your publication of a cartoon in September 2014, which satirized the Venezuelan health care system and included the signature of the late president Hugo Chávez? How did the fallout from this incident affect your professional life?

What do you see as the role of a journalist and political cartoonist within a country like Venezuela? What is the desired or intended effect of your cartoons?

We are translators of reality, in one respect. We have a vision to narrate what occurs in the country and how the rule of law has disintegrated in the last 16 years. When people see my cartoons, I would like them to snap, for my art to wake them up. The system is deceiving, and everything is questionable, in the system and in the structure of the modern world, both in Venezuela and throughout the rest of the world.

Where does your creative ability come from and what motivates you to publish political cartoons and other satirical depictions of political issues and current events?

I believe that it is a powerful tool; the mix of drawing, intelligence and creativity. It must be used responsibly. It is used to promote peace, reflection, and the desire to get yourself in trouble. Peace is not a static phenomenon, and there is much to be said. We should all leave our comfort zones so that this can have meaning in the world.

What is the message you hope to convey to Washington this week? What do you see as the role of the international community—specifically international institutions like the Organization of American States’ Inter-American Commission on Human Rights, and governments in the region like those of the United States and Colombia—with regard to promoting the protection of freedom of expression in Venezuela?

The world’s problems are calling for a new way of approaching human rights. Since the end of World War II and then the issuing of the Universal Declaration of Human Rights, man has figured out different ways of abusing those rights. These new tendencies need to be revealed by governments that have the power to do it, though they are not always willing to leave their own comfort zones.

The Charlie Hebdo case has drawn global attention to attacks on journalists, and specifically cartoonists. Do you believe that what we’re witnessing is part of a broader dynamic of closing space for freedom of expression and diminishing tolerance of dissenting opinions, or are these cases too distinct to warrant any comparison?

I believe that barbarism is universal and that it’s embedded into the world’s system. The “civilized world,” as it’s defined in the West, is in danger. There are violent religious fundamentalists, governments that want to stay in power at any cost, and economic powers that want to purchase human values. I believe that the cartoonist, in the midst of that context, tries to unmask that reality—not necessarily to change it, but to uncover it through the drawing.