With Corrupt Elites at the Helm, Moldova Drifts Off Course

Instead of depending on tainted politicians for reforms, the EU and other international stakeholders should put more emphasis on supporting the country’s increasingly energetic civil society. 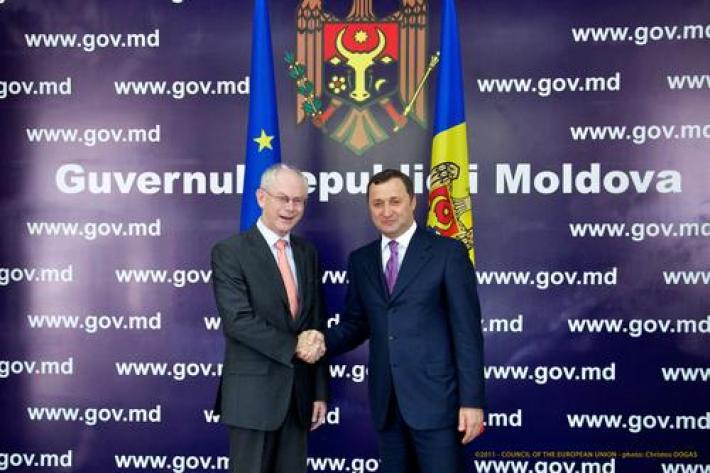 For several years now, Moldova has been presented as a pro-European country and a potential success story of the European Union’s Eastern Partnership initiative. Unfortunately, recent developments—including a massive financial scandal and the resignation of the prime minister—indicate that this may have been wishful thinking.

Freedom House’s newly released Nations in Transit 2015 report designates Moldova as a “transitional government or hybrid regime,” with a democracy score of 4.86 on a 1–7 scale, and it could eventually be downgraded to a “semi-consolidated authoritarian regime” unless the issue of deeply rooted corruption is seriously addressed.

A pattern of opaque transactions, bitter feuding, and accusations of money laundering and criminality among the country’s political and business elites culminated late last year in an unprecedented bank fraud worth some $1 billion, or about 15 percent of the gross domestic product. As the case unfolded in the media this spring, tens of thousands of protesters took to the streets to express their outrage. Prime Minister Chiril Gaburici, who had just taken office in February following national elections in November, resigned on June 12, having clashed with prosecutors over their handling of the banking scandal. Prosecutors in turn had accused him of falsifying his academic diplomas.

EU officials and politicians have reacted cautiously to these events, apparently unsure whether the protests are associated with an anti-European political agenda. But the main organizer of the protests was the civic platform Dignity & Truth, and its goal was simply to express public dissatisfaction with the incredibly high level of corruption in the country. The movement is not linked to any political party (despite some attempts to coopt or discredit it), and is rather inclusive, involving citizens of Moldova from various regional, ethnic, and social backgrounds.

More broadly, European leaders have often been so concerned with supporting the nominally pro-European parties in Moldova—the Liberal Democrats, the Democrats, and the Liberals—that they have turned a blind eye to the groups’ lack of political will to advance the rule of law and fight corruption, which is damaging their reputation among Moldovan citizens. For instance, the enthusiasts of the Eastern Partnership initiative may favor one Vladimir (Filat) over the other (Voronin), even as many in the country believe that both are pawns or participants in the corrupt schemes of the third Vladimir (Plahotniuc), who reputedly plays a decisive role in the parliament, the government, and virtually every other sphere.

EU policymakers are rightly worried about the threat of a fourth Vladimir: Russian president Vladimir Putin, the most popular foreign politician in Moldova. The Kremlin’s sponsorship of the breakaway territory of Transnistria, its barrage of propagandistic broadcasts to Moldovan audiences, its close ties to opposition parties, and its more subtle influence through entities like the Orthodox Church all pose a serious challenge to the European integration and democratization of Moldova.

Nevertheless, Brussels cannot rely on the pro-European platforms of certain political parties in an environment of profound corruption, where ideological and geopolitical commitments take a back seat to personal enrichment, and where the kleptocratic Russian regime is obviously in its element.

The political scenery doesn’t look promising. No faction appears to have won an overwhelming victory in this month’s local elections, and the low turnout reflected voters’ frustration with the choices available to them. Meanwhile, Prime Minister Gaburici resigned in part because entrenched elites—primarily the three Vladimirs and their allies in law enforcement agencies— prevented him from implementing reforms. He was consequently unable to conclude an agreement with the International Monetary Fund (IMF) that would open the gates for broader financial support, including from the EU. Now Moldova is left alone on the verge of default. Some believe that the West will bail it out for geopolitical reasons; if not, Moldova might be forced to ask Putin for help.

Given their dissatisfaction with the current leadership, citizens’ enthusiasm for integration with the EU is unfortunately waning. This will probably continue if EU countries do not demand that corrupt Moldovan officials be held accountable. Instead of depending on tainted politicians for reforms, EU and other international stakeholders should put more emphasis on supporting the country’s increasingly energetic civil society. Development of anticorruption initiatives, investigative journalism and independent media, and youth policy should be at the forefront of any new approach.

The fact remains that the Moldovan people want a clean government, the rule of law, and free elections, and in this sense at least, the earlier optimism about the country was justified. If citizens are empowered to demand such public goods from their leaders and institutions, Moldova may yet become a success story.