African heads of state recently gathered in Addis Ababa, Ethiopia’s capital, for the 24th summit of the African Union. While discussions focused on high-profile continental crises such as the Boko Haram insurgency and the Ebola epidemic, an important phenomenon was, unsurprisingly, left off the agenda: the deteriorating situation for political and civil liberties in much of East Africa. 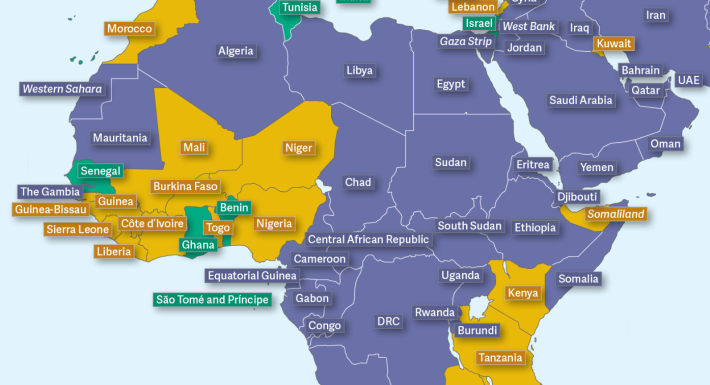 African heads of state recently gathered in Addis Ababa, Ethiopia’s capital, for the 24th summit of the African Union. While discussions focused on high-profile continental crises such as the Boko Haram insurgency and the Ebola epidemic, an important phenomenon was, unsurprisingly, left off the agenda: the deteriorating situation for political and civil liberties in much of East Africa.

While East Africa has never been a model of good governance, Freedom in the World 2015 found declines in Uganda, Burundi, and Rwanda that bring them closer to their low-scoring neighbors in the Horn of Africa—most notably Ethiopia, which has set the regional standard for repressing dissent with harsh laws on civil society groups, the media, and terrorism. Recent setbacks suggest that even Kenya, a country that had shown promise in 2010 by enacting a new constitution with several positive reforms, may be following a similarly authoritarian path.

The leaders of Uganda, Burundi, Rwanda, and Kenya all followed a global trend observed in Freedom in the World 2015, resorting to more brazen antidemocratic tactics in their ongoing effort to preserve political control. These tactics were often justified on the grounds of strengthening national security, fighting terrorist threats, or preserving national unity. 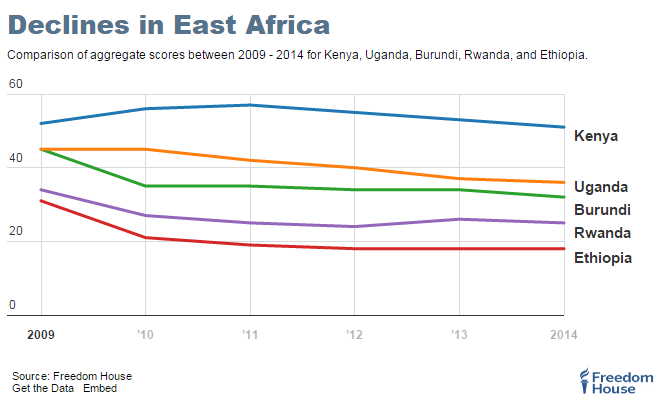 Uganda has endured a series of crackdowns and repressive new laws aimed at the political opposition, civil society, independent media, women, and the LGBT community. One such law, the Anti-Homosexuality Act, was struck down on a technicality in August 2014, but LGBT people continue to face high levels of intimidation and harassment. Meanwhile, President Yoweri Museveni is preparing to run for yet another term in 2016, extending a tenure that began in 1986, despite signs of opposition from within his own party.

The government of Burundian president Pierre Nkurunziza—who won his second term in 2010 with 92 percent of the vote, after an opposition boycott—intensified pressure on its political opponents last year in advance of May–June 2015 elections, with the incumbent declaring that he intends to run for a third term despite current constitutional barriers. Operatives of the ruling party continually disrupted opposition activities by obstructing meetings, banning demonstrations, and targeting politicians and activists with harassment, arrests, and violent assaults. Critics accused the ruling party of arming its youth wing, Imbonerakure, and using it to terrorize the electorate and attack the opposition and other government critics, in collaboration with local authorities and with complete impunity. A coalition of regional civil society groups recently warned that such tactics could lead to broader violence, less than 10 years after the end of a 13-year civil war.

In Kenya, a spike in attacks by the Shabaab, the Somali extremist group, served as an excuse for the government of President Uhuru Kenyatta to take draconian measures at the end of 2014. While the High Court has suspended, for now, some of the most onerous provisions of a new security law signed in December, more than 340 civil society groups were deregistered the same month for alleged financial irregularities. Some were specifically accused of being “vulnerable to abuse as conduits of terrorism financing and money laundering.” In the fight against the Shabaab, the security services have allegedly engaged in extrajudicial killings and other abuses. Also during 2014, Kenyatta and his government blatantly interfered with the International Criminal Court’s case against him, to the extent that, according to prosecutor Fatou Bensouda, the Kenyan authorities had “deprived the victims of their right to know the full account of what transpired” during the country’s 2007–08 postelection violence.

Finally, the authorities in Rwanda continued a long-standing pattern of repressing dissent in the name of national security. By 2014, the 20th anniversary of the 1994 genocide, nearly all critical debate had been silenced, even on the internet, which previously served as a venue for freer discussion. During the year, the government stepped up use of a new law that allows security officials to monitor online communications, and surveillance appears to have increased. Around the genocide commemoration period, the country’s few remaining independent journalists were targeted for harassment and arrest. The last independent human rights organization, LIPRODHOR, had already been co-opted by progoverment figures in 2013. Dissidents living outside Rwanda have also been threatened, attacked, forcibly disappeared, or even killed, including Patrick Karegeya, the former head of Rwanda’s external intelligence service, who was found dead in a Johannesburg hotel room on January 1, 2014.

As others have rightly observed, the past failure of African and international leaders to challenge blatantly antidemocratic moves by Ethiopia has contributed to the authoritarian drift across East Africa. If the leading democracies in Africa and elsewhere continue to acquiesce, more repression and instability in an expanding swath of the continent can be expected.