Election Represents an Opportunity for Reform in Zambia

There is some hope that the winner of next week’s presidential by-election could reverse recent declines in Zambia’s democratic standing, but a number of factors are working against such a positive outcome. 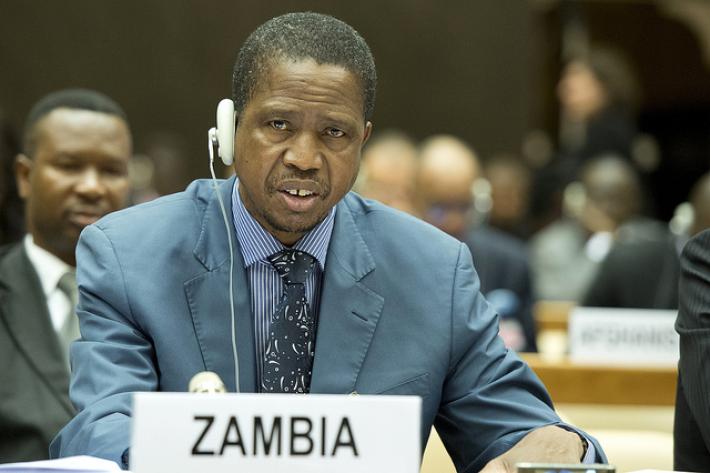 Edgar Lungu of the ruling Patriotic Front (PF), the front-runner in next week’s presidential by-election, took positive steps toward opening Zambia’s democratic space during his time in government last year, but it remains to be seen whether he would lead a reversal of the previous PF administration’s increasingly autocratic policies.

President Michael Sata’s death on October 28 brought a moment of disorder to Zambian politics. Despite long-standing rumors that Sata was seriously ill, both his party and the opposition Movement for Multiparty Democracy (MMD) were unprepared to agree internally on their respective presidential candidates. Youth cadres took to the street to support their candidates of choice, and party infighting also played out in the media and the courts. Former president Rupiah Banda of the MMD reemerged, attempting to sidestep party leader Nevers Mumba. However, on December 20, when nominations were due, Mumba secured the candidacy through a favorable court ruling, even without the support of his party, and Lungu claimed the PF nomination.

While nine other candidates will be contesting the election, the two main contenders are Lungu and Hakainde Hichilema of the opposition United Party for National Development (UPND).

The race will be a close one. Although Hichilema was not a leading competitor in previous elections, he comes from a unified party that commenced campaigning at a time when the MMD and PF were still mired in ugly internal conflicts. Hichilema is also better funded this time, and is receiving more media coverage than he had in past election periods. Finally, his is the only major party that has not held the presidency and squandered voters’ good will once in office.

These factors will make the UPND a much stronger contender than many would have expected, but Lungu still has the advantage. Not only will he have the support of those who believe the PF should finish out Sata’s term, but voters will remember that after Sata’s death, Lungu resisted pressure to make a power grab, turning over the position of acting president to Vice President Guy Scott as called for in the constitution. Furthermore, Banda—who still enjoys some popularity, particularly in the east—endorsed Lungu as his preferred candidate.

A Lungu victory holds the possibility of improvements to Zambia’s democratic standing. Under Sata’s rule, civil society groups were targeted with the restrictive NGO Act, access to the independent online newspaper Zambian Watchdog was temporarily blocked, journalists were harassed and arrested, by-elections became increasingly violent, and the opposition was prevented from holding rallies as their leaders were arrested on contrived charges.

But when Lungu took over the Justice Ministry last summer, replacing the discredited Wynter Kabimba, he opened up dialogue with civil society, promising to solicit their input in the implementation of the NGO Act going forward. And as acting president in the final days of Sata’s administration, he released the long-awaited draft constitution. Such moves have raised hopes that if elected, Lungu might go further, perhaps replacing the NGO Act with more accommodating regulations that include civil society input. He would also have the opportunity to reform the restrictive Public Order Act, repair relations with the media, and move forward with a referendum on the new constitution.

There are a number of factors working against such a positive outcome. The tight race, combined with anticipated low voter turnout, means that the margin of victory could be small, leaving the winning party vulnerable going into the 2016 campaign period. The need to focus on the next election could easily overshadow human rights priorities. Of particular concern is Lungu’s failure to engage in any major discussion of the NGO Act or the Public Order Act on the campaign trail. And while other candidates, including Hichilema, have signed a pledge to commit themselves to the draft constitution, Lungu has yet to do so. It is important to remember that the draft constitution would require an absolute majority for presidential elections, replacing the existing first-past-the-post system—something Lungu may not want to commit himself to for 2016 if he does not win by a large margin in the current by-election.

The next president has a chance to reverse Zambia’s democratic declines, restore its status as an example to its neighbors, and make it a force for democratization among governments in the region. However, in order to achieve this, the winner must submit the new constitution to a referendum so that it can receive the endorsement of the Zambian people. Secondly, the next president must reform the NGO Act, as it severely constrains civil society and can be used by the government to punish groups that advocate for democratic freedoms. Finally, next week’s victor must reform the Public Order Act, which continues to be used to restrict opposition parties and could affect the fairness of the 2016 campaign period.