The EU must create mechanisms to uphold media freedom in member states and stand firm against external adversaries of independent journalism. 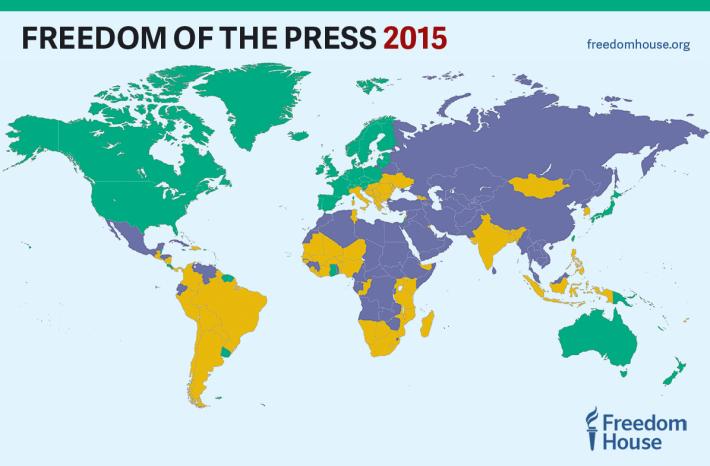 A version of this article appeared in the Dutch newspaper NRC.

Worldwide, press freedom is facing its most serious threat since the Cold War. According to a Freedom House report published this week, only 14 percent of the world’s population live in societies where journalists can report the news without the pervasive interference of an oppressive state, powerful economic interests, terrorists, religious fundamentalists, or the military.

During 2014, reporters in the Middle East, South Asia, and Latin America were kidnapped by terrorists and criminal gangs. In countries such as China, Russia, Turkey, and Egypt, authorities routinely used arrests and censorship to silence critics. Oligarchs and the super-wealthy turned their media ownership into monopolies and increasingly used their power to support the government or a favoured political party. Where previously dictatorships were content to censor dissenting opinions, they now increasingly attempt to shape public opinion through blatant, but shrewdly packaged, propaganda.

The decline in press freedom has an impact on virtually every continent, including Europe. Conditions in Europe are clearly better than in other regions. More than 66 percent of Europeans live in a society where journalists can carry out their work in robust freedom. Nevertheless, there are a number of worrying trends in the region:

Most of the countries with the most significant declines are relatively new to the European Union (Hungary), or are aspiring (Serbia, Macedonia) or previously aspired (Turkey) to EU membership. These declines are not in line with the slogan “Europe whole and free.”

Inability of the EU to safeguard press freedom

The decline in press freedom in specific countries is only part of the European problem. The second and more important part is the inability of other European countries and/or the EU to ensure that journalistic freedom and European standards are upheld.

In Hungary in particular, the situation is especially worrying. The government of Prime Minister Viktor Orbán has enabled his Fidesz party to influence coverage of political affairs. Orbán’s initiatives are not extreme and have not reached the distressing levels of Russia or Turkey. But the government has used its two-thirds parliamentary majority to push through a series of press regulations that benefit Fidesz at the expense of democratic standards.

Something similar is being attempted in Portugal. A large majority in the parliament is for adopting a new law obliging media to have their plans for coverage of the elections (scheduled for October 2015) assessed. This is media suppression under the guise of ensuring more balanced coverage, with equal attention to larger and smaller parties. A storm of protest has erupted, and commercial and public media are threatening to boycott coverage of the elections.

Under Vladimir Putin, Russia has become a propaganda state where information is an instrument of war and dissenting voices are silenced. Meanwhile, under the influence of the Kremlin, independent journalism has been all but quashed in countries like Belarus and Azerbaijan, where independent-minded journalists are regularly imprisoned or sent into exile.

Europe should denounce this sorry state of press freedom much more. One of the important achievements of the EU is precisely that it set the bar high for democratic standards. Countries aspiring to membership must comply. Unfortunately there are no rules, there is no infrastructure to prevent countries from retreating from the norms of democratic governance once they achieve formal membership. There is no democratic yardstick within the union.

Hungary has, in response to the EU’s concerns, made a number of adjustments to its policy, but the most drastic measures remained intact. Authoritarian-minded politicians in other European countries have no doubt taken note.

To reverse these trends, the EU can take a number of clear measures:

Firstly, the EU can make it clear to countries aspiring to membership that a vibrant, independent, and lightly regulated press is nonnegotiable.

Secondly, instruments must be designed and reinforced with sanctions to monitor press freedom in member states, particularly aimed at countries like Hungary, where problems have arisen.

Thirdly, the EU should build on the initial steps already taken to protect European states against the barrage of propaganda from Russia. In particular, the Baltic states and other post-Soviet countries should be assisted with the development of professional Russian-language media that do not indulge in propaganda, thus countering the efforts of the Kremlin to manipulate information to undermine legitimate governments.

But most importantly, Europe must continue to stand firm for the ideals that until recently made it a democratic network that was a role model for the rest of the world. Those adversaries of freedom who bring “European values” into question depend on hesitation and doubt from Europe. We must respond to them with strength and confidence. Europe need not apologize if it stands firm for values such as freedom of expression and ethical and fair journalism.