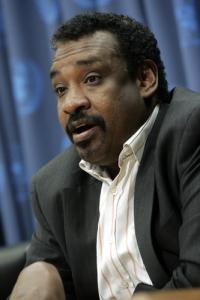 On the first anniversary of his death, Freedom House commemorates the accomplishments of Osman Hummaida, an ardent advocate for human rights in his native Sudan and throughout Africa:

“Osman Hummaida was an indefatigable champion of human rights," said Robert Herman, vice president for international programs, “He battled daily to make sure the world knew and cared about atrocities taking place in Sudan. His legacy is strengthened thanks to the work by the African Centre for Justice and Peace Studies and the countless human rights defenders he assisted and mentored.”

Background:
Hummaida, who spent his career documenting human rights violations in Sudan, was the first activist to visit and write about the IDP camps in Darfur and refugee camps in Chad. In 2000 he established the first human rights network in Sudan. He strove to give these activists the emotional and physical support they needed to continue their work.

Hummaida was forced into exile when Sudanese President Omar al-Bashir cracked down on human rights and democracy groups, following the International Criminal Court issuing a warrant in 2009 for Bashir's arrest for alleged war crimes and crimes against humanity. Hummaida and key staff of leading Sudanese organizations responded by establishing the African Centre for Justice and Peace Studies (ACJPS) in Kampala, Uganda, to ensure continued monitoring of the human rights situation in Sudan.