A new book by the former U.S. ambassador reveals a prime minister who disdains democratic principles, prefers cronyism to market competition, and sees his country as a victim of hostile foreign interests. 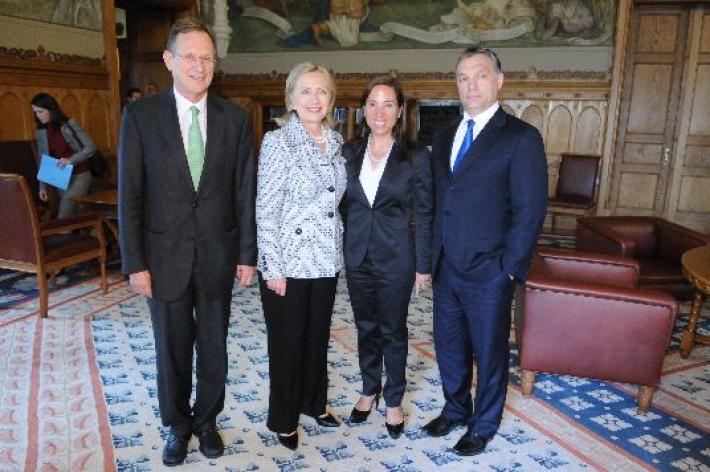 In Madam Ambassador: Three Years of Diplomacy, Dinner Parties, and Democracy in Budapest (New Press, 2015), Eleni Kounalakis presents a firsthand account of a critical period in Hungary’s postcommunist history. Kounalakis served in Budapest between 2010 and 2013, the years of the “Two-Thirds Revolution,” during which Prime Minister Viktor Orbán and his Fidesz party used their two-thirds supermajority in the parliament to push through a top-to-bottom overhaul of Hungary’s political system.

Kounalakis was a political appointee with little foreign policy experience; she had made generous contributions to Democratic Party candidates and liberal causes in California, and was a friend of Nancy Pelosi and Hillary Clinton. But she brought two important assets to the job of ambassador. First, her father had immigrated alone as a teenager after the Greek civil war and built a prosperous California land development company, and this family experience gave Kounalakis a strong appreciation for the American system and a radar-like sensitivity to the specious arguments advanced by those trying to rationalize an end run around democratic norms. Second, her years in the family business convinced her that there was a connection between stable, democratic political development and economic policies that promote market principles and challenge corruption.

Kounalakis describes candid exchanges with Orbán and other Fidesz officials. Her assessments, though often cautiously formulated, usually dovetail with the opinions of Orbán’s critics. But Kounalakis is a shrewd judge of character, and her insights on Hungarian politics help answer questions that are often asked about the prime minister’s outlook, motivations, and plans for the country. Here are a few:

Is Orbán a democrat?

In one of her last conversations with Orbán, Kounalakis discussed the writings of Milan Kundera, an author both respected. Kundera, she said, believed that freedom was “the ability to live free from oppression—especially free from oppression by your own government.” Orbán, eyes narrowing, blurted: “All this talk about democracy is bullshit!” Kounalakis took this to mean that he was fed up with being lectured about democratic standards and Hungary’s backsliding under his watch.

But her account makes clear that Orbán is not at heart a man committed to democratic principles. Instead he is a majoritarian who rejects the definition of democracy as a system that is subject to the discipline of a political opposition, a free press, and especially an independent judiciary. During a meeting with a delegation of former U.S. Republican officials, Orbán was told by Ed Meese, President Reagan’s attorney general, that Reagan “always left something on the table for his political opposition, just so they would feel they had won something too and be willing to work together for the country.” Orbán retorted: “I couldn’t possibly do that.”

Is Orbán a conservative?

Orbán, according to Kounalakis, idolized Reagan. And he in turn has been praised by a number of conservative figures in the United States—including paleocons like Pat Buchanan, but also more mainstream commentators and Republican elected officials. Orbán and his spokesmen insist that the barrage of criticism directed at the Fidesz government stems from his willingness to stand up for conservative principles in a Europe where politics is dominated by liberal elites.

Yet if conservatism is defined by a commitment to market principles, economic freedom, and limited government, as it often is in the U.S. context, then Orbán falls well short of the Reagan standard. Kounalakis, fortified by years of experience in property development, zeroes in on the cronyism, statism, and economic nationalism that have characterized Fidesz’s strategy. Out of office, Orbán had railed against “Bolshevik billionaires,” a reference to former communists who had enriched themselves during Hungary’s early privatization process. But armed with its two-thirds majority, Fidesz openly set about creating a class of loyal tycoons. Crony capitalism flourished, as Fidesz imposed new taxes on businesses that did not belong to its patronage network and gave privileges to the companies of allied businessmen. Enterprises that stood outside the charmed circle had little chance of gaining government contracts, while “the tax code was more complicated than ever, and regulations had reached a new level of unpredictability.”

Kounalakis flatly rejects this charge. But she asserts that Orbán and his followers subscribe to a selective interpretation of history focused on the past wounds suffered by the Hungarian nation. This leads to a defensive outlook that bristles at external enemies and foreign ideas: Germany, the Soviet Union, Bolshevism, the architects of the 1920 Treaty of Trianon, which stripped away much of prewar Hungary’s territory. With Hungary viewed as history’s victim, the country’s own dark moments, such as its alliance with Nazi Germany, are denied or explained away.

While Kounalakis is restrained in her description of Orbán’s ruling style—she eschews words like “authoritarian” and comparisons with Putin and Erdoğan—she concludes that during his tenure there has been a significant centralization of power and a weakening of checks and balances. That alone stands as a disturbing indictment of a leader who regularly describes himself as an anticommunist freedom fighter.