Singapore and the Limits of Authoritarian Prosperity

The recent death of founding Singaporean prime minister Lee Kuan Yew has drawn fresh attention to the debate about the ability of authoritarian governments to deliver economic development. 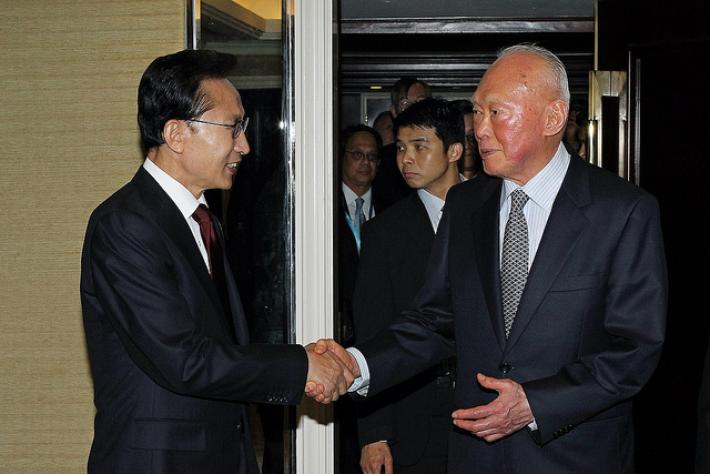 The recent death of founding Singaporean prime minister Lee Kuan Yew has drawn fresh attention to a long-running debate about the ability of authoritarian governments to deliver economic development to their people.

Singapore’s achievements under Lee were indeed remarkable, but the city-state has always been far less authoritarian than other would-be exemplars like China, and all such countries may eventually be forced to choose between political liberalization and economic breakdown.

When one searches the historical record for autocratic systems that have produced dramatic or long-term economic development, it becomes clear that one or more of the following is true in any given case:

This last point raises the question of what happens when an authoritarian economy that has benefited from one or both of the first two conditions runs out of steam. Falling commodity prices can shatter growth trends and generous state budgets, as the low price of oil has done in Venezuela and Russia of late. Post-totalitarian recoveries can stall, requiring politically threatening reforms to continue, or they can be derailed by fresh political instability as an authoritarian regime lashes out at foreign or domestic opponents.

Indeed, many dictators have proved willing to utterly destroy any economic achievements through crackdowns and civil wars rather than surrender power. The most egregious example today is Syria’s Bashar al-Assad, but it is not hard to imagine the Chinese Communist Party making a similar choice in the future, to the great detriment of China’s people and the global economy. In some ways China is already being held back by Beijing’s escalating internet censorship and other repressive policies.

Even if an authoritarian government avoids self-inflicted wounds, like Russia’s invasion of Ukraine and the ensuing European sanctions, the country will ultimately reach a point of economic maturity where it becomes subject to the ordinary cycles of growth and recession. No system can put this off forever. And if a regime lacks electoral legitimacy, relying almost exclusively on the promise of prosperity to maintain public acceptance, downward cycles can be existential threats.

Many a democratic leader has fallen due to economic downturns, of course, but the larger system tends to absorb the blow, allowing voters to experiment with new policies and personalities, and offering peaceful channels for them to air their grievances—all of which has the added benefit of buying time for the economy to recover. Dictatorships have no such flexibility.

So where does Singapore fit in? According to Freedom House’s Freedom in the World report, which has been tracking the level of political rights and civil liberties around the world since 1972, Singapore has always earned far better ratings than its harshly authoritarian counterparts. It currently receives an overall freedom rating of 4.0 on a scale of 1 to 7, with 7 as the least free; this gives it a designation of Partly Free. China earns a 6.5, and is considered Not Free.

The key to the city-state’s prosperity has been its status as a hub of international business. Because it lacks natural resources and the draw of a giant market and labor pool like China’s, it is obliged to maintain a more business-friendly environment than any of its neighbors. It has vigorously suppressed corruption and fostered a degree of legal order and predictability that China has never been able to achieve under Communist rule. Moreover, the regime is free of any aggressive political ideology that might clash with its economic goals or entangle it in international conflicts.

Crucially, Singapore also holds elections and allows a measure of political pluralism, and it has been under growing pressure to move further on this front. The opposition won its largest-ever number of seats in the 2011 elections, garnering some 40 percent of the popular vote. Fully democratic Asian countries have shown that they can prosper, and Singaporeans have rightly asked why they should continue to tolerate media, electoral, and other restrictions designed to keep the ruling party in power.

While many authoritarian regimes have created decades of grinding poverty, they can also rack up years of swift economic growth under the right circumstances. Similarly, while many democracies are wealthy, quite a few—particularly the younger ones—are still poor by comparison. But the democracies are playing a long game. Their enduring political stability creates conditions for decades and even centuries of steady improvement. Dictators, by contrast, are at least as likely to destroy as they are to build, and any prosperity they do oversee can only last if it is handed off to a responsible democratic government.