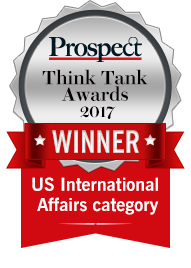 Freedom House has won Prospect magazine’s 2017 Think Tank Award for International Affairs, in recognition of its taking the lead in highlighting the growth of illiberal policies in democratic countries and the resurgence of authoritarian rule. Citing Freedom House’s “compendious knowledge,” Prospect said the organization’s “rigour and policy prescriptions make it the point of reference within its area.”

Prospect, announcing winners of its 17th annual Think Tank Awards in London, singled out defiant isolation as an emerging global theme: “Perhaps as a reaction against our interconnected world, the sense of difference seems to be heightening, dividing one group from another. The more we looked, the more we realised how many entrants were confronting the question of what happens once we’ve retreated into our silos.”

Freedom House’s in-depth, original research on the world-wide decline of freedom includes Freedom in the World 2017, Freedom of the Press 2017, Freedom on the Net 2016, and Nations in Transit 2017. It has also looked at new strategies of repression, the exploitation of open societies, and the spread of illiberal policies in even democratic countries, in a series of new, special reports. They include Breaking Down Democracy, The Assault on Press Freedom in Poland, and The Battle  for China’s Spirit, all published in 2017. Freedom House's upcoming report Freedom on the Net 2017 will launch in November 2017.