As reflected in recent criminal atrocities, Mexico’s president has yet to address many of the deep-seated problems he inherited upon taking office in 2012. However, the current crisis of confidence presents a unique opportunity for comprehensive reform. 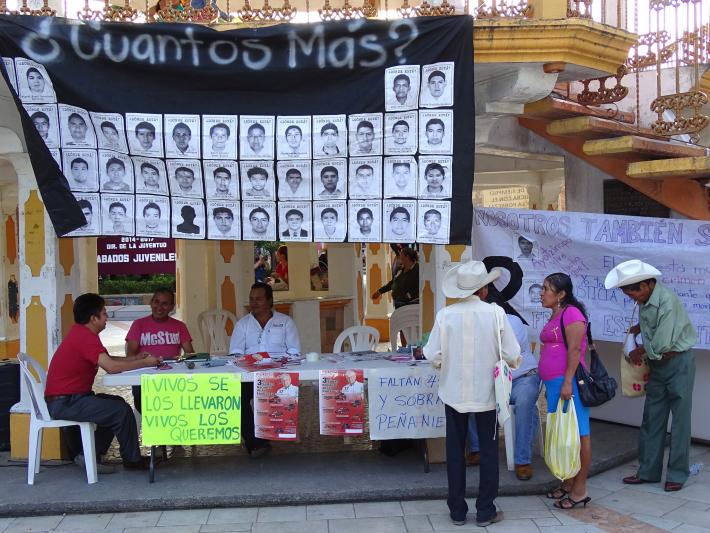 This month’s meeting between the presidents of Mexico and the United States took place under very different circumstances from their last encounter in Washington. In 2012, Enrique Peña Nieto came to the White House with grand plans for bilateral trade and economic development in Mexico. But nearly three years later, his ambitious agenda has been marred by the violence and insecurity that continue to plague the country. President Barack Obama had no choice but to mention the 43 students who were abducted and presumably killed in Iguala in September, an awful tragedy that has garnered international attention and domestic outrage.

Events such as this, as well as the extrajudicial execution in Tlatlaya in July, are merely the latest examples of the human rights crisis that Mexico is facing. Despite the positive international image that Peña Nieto’s administration has sought to portray since taking office, the problems that he inherited—among them organized crime, structural corruption, impunity, lack of accountability, and weak institutions—remain largely unaddressed.

The recent incidents and the more systemic problems they epitomize not only undermine the credibility of the Mexican government, which is facing a crisis of confidence, but have also awakened Mexican civil society, which has lost its patience with the administration and is now demanding immediate responses. Empowered by high levels of access to information and widespread internet use, Mexican civil society has launched huge social media campaigns and organized massive, socioeconomically diverse protests in recent months. This emerging citizen movement and its calls for greater participation in the decision-making process appear to be a productive response to the helplessness and frustration that Mexicans are feeling, and could yet spawn a more democratic political culture.

Peña Nieto began his presidential term by focusing on economic growth, ignoring the fact that simply neglecting the underlying problems plaguing the country would not make them disappear. His “Pact for Mexico,” a positive attempt at modernizing the country, enabled important advances and much-needed reforms in various sectors, but so far it has had few visible results for average citizens. Against this backdrop, the abduction of the students from Ayotzinapa college in Iguala provided fuel for a growing number of critics who perceive a large disparity between Peña Nieto’s ambitions and achievements.

The government’s responses to the Ayotzinapa case have reinforced the impression, shared by much of the Mexican public, that the president’s focus on growing the economy and building his international image have distracted him from domestic insecurity and human rights concerns. His initial reaction to the incident was to dodge responsibility, claiming that the case fell under the state’s jurisdiction. Later, he ordered investigations to begin, but they were carried out with a complete lack of transparency and with many public statements by government officials that were later called into question. The attorney general declared that he was tired of giving explanations to the press. And a short while later the president asked his citizens to do the impossible: to move on from Ayotzinapa without having been given any answers.

Above all, the government’s reaction has failed to acknowledge the severe and widespread nature of the problems exemplified by the Ayotzinapa case: According to unofficial statistics, there have been more than 70,000 killings, 22,000 disappearances, and approximately 150,000 people displaced by the violence in Mexico over the last eight years alone. While the “Ten Actions to Improve Security, Justice, and Strengthen Democracy” recently proposed by the government would include some positive measures if fully implemented, other elements of the proposal are short-term solutions that stand little chance of effecting change if the country’s underlying problems are not comprehensively addressed.

The task facing the government will require much more than new policies. Peña Nieto must also work to improve public perceptions, demonstrating through his actions that the political will for real reform does exist, and is not mere rhetoric. In this vein, it is not enough to create new institutions if they are also corrupt, or to implement reforms that, in their secondary laws, reinforce the privileged political and economic positions of the elite class. Instead, the government should crystallize its commitment to addressing Mexico’s most intractable problems by establishing a comprehensive, independent, and functional National Anticorruption System as well as an autonomous district attorney’s office for anticorruption. It should also fulfill its promises to increase public access to information by creating a National System for the Search for Missing Persons, developing a Truth Commission on Ayotzinapa, and taking steps to ensure that governmental institutions comply with requests for information from the Federal Institute for Access to Information.

For its part, civil society, which has made positive strides to assert itself in recent months, faces the challenge of unifying various voices across distinct platforms and better coordinating the interests of diverse groups to effectively present the government with a set of concrete solutions. Such a strategy would make it possible for civil society contributions to actually yield the kinds of changes that citizens are demanding.

Mexico’s challenges, however daunting, provide a window of opportunity for the government and civil society to build public institutions that would underpin a more transparent and democratic society. It remains to be seen whether Mexico is prepared to take advantage of this opportunity.