The Uyghurs’ Plight: Lessons about China

Beijing’s repression of the Uyghur population reveals larger truths about China, and has policy implications for the United States. 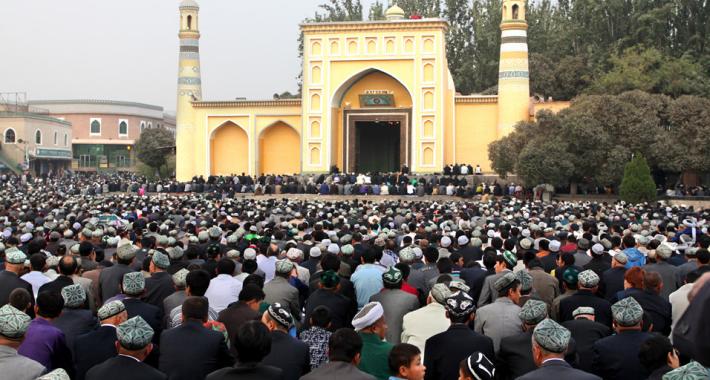 One of the government propaganda murals recently painted on walls next to a mosque in the Chinese Silk Road district of Kashgar portrays knife-wielding Uyghurs clad in black being crushed by a steamroller sporting the Chinese flag.

This is more than artistic license, and the repression of the Uyghur people by Chinese authorities is more than a niche issue. Since the crackdown by security services on peaceful demonstrators in July 2009 in Urumqi, the capital of the Uyghur “autonomous region” in China’s far west, the repression has been acute and rising. It includes a pervasive security presence, community informants, and periodic internet blackouts. It also reveals three larger truths.

First, it is of a piece with the overall human rights record of China, which is abysmal. Freedom House’s annual survey of political and civil liberties, Freedom in the World, ranks China among the 16 least free nations, affecting one-fifth of the world’s population. Granted, the Chinese government has loosened economic controls, facilitating greater prosperity and some personal choice for citizens. Yet the Chinese Communist Party brooks no dissent or communication that might conceivably contradict its monopoly on political power. Moreover, such restrictions increasingly reach beyond the political, encroaching on public health, private gatherings, and entertainment programming. Under President Xi Jinping’s leadership, various previously tolerated activities have been harshly suppressed.

There is more to it than a white-knuckled grip on political power. “Human dignity” is the cross-cultural premise underpinning human rights. It depends on all people being accorded equal value and access to justice. The Chinese government’s heavy security deployments in the Xinjiang region (also known as East Turkestan), its concerted campaign to move Han Chinese in with privileged access to economic opportunity, and its complete disregard for the rule of law when detaining, sentencing, and executing Uyghurs ignore that principle.

Second, Chinese government repression has recently accelerated in the area of religious persecution. Beyond squelching their dissent and devaluing their cultural identity, Chinese authorities have taken aim at the heart of Uyghurs’ freedom of worship. In Xinjiang, they are forcing Uyghurs to abandon Muslim practices related to religious attire, beards, and fasting during the holy month of Ramadan. Boys under the age of 18 are barred from entering mosques for prayers.

Third, Beijing is using the common authoritarian tactic of branding nonviolent, independent voices as terrorists. There indeed have been several violent, bloody incidents in Xinjiang. But the vast majority of Uyghurs reject the purposeful targeting of innocent civilians. The Chinese authorities have used deadly attacks by extremists, like those in Kunming in March 2014 and in Urumqi in May 2014, as an excuse for subjugating all Uyghurs. The government’s actions are radicalizing some Uyghurs, while undercutting those who promote harmony—such as the economist Ilham Tohti, whose promotion of policy solutions and interethnic understanding would help mitigate unrest in Xinjiang, but who was sentenced to life in prison in September on spurious charges of “inciting separatism.”

Each of these truths has policy implications for the United States. China’s repression of dissent requires more frequent U.S. condemnations, like the commendable State Department statement about Tohti’s imprisonment. Diplomatic pressure for change—at the highest possible levels—is needed too. Not only does the United States owe it to the Chinese and Uyghur people, but China’s pernicious model to the world of economic growth combined with muzzling of dissent demands a vigorous response.

China’s religious persecution of Uyghurs also serves to remind the United States that defending freedom of worship is integral to pluralism. Standing up for the freedoms of Muslims, like the Uyghurs, has the additional benefit of making crystal clear that the U.S. global campaign against violent extremists is by no means an anti-Muslim policy.

Similarly, China’s sweeping portrayal of Uyghurs as terrorists is a reminder that the United States should not go silent when other governments use counterterrorism as an excuse to crush nonviolent dissent. Real, bloodthirsty terrorists around the world must be confronted. Yet as an exemplar the United States should not, through overreach (in some detainee or drone policies that create more terrorists than they eliminate), give running room to dictators, including those in Beijing.

Important in and of itself, the Uyghur people’s plight offers cues on U.S. global leadership, which is still needed as a beacon for human dignity.

Rebiya Kadeer, who was exiled from China 10 years ago, is president of the World Uyghur Congress. Mark P. Lagon is president of Freedom House and coeditor of Human Dignity and the Future of Global Institutions.