When the European Union won the 2012 Nobel Peace Prize, the awards committee cited “six decades contributed to the advancement of peace and reconciliation, democracy and human rights in Europe.” In light of the depressing news from Kyiv last week, this might be an ideal occasion to reflect on the latter part of the Nobel tribute—the EU’s contribution to political freedom.

The transformation of the formerly communist societies of Central and Eastern Europe stands as one of the most significant advances for democracy in human history. The Baltic states, the countries of Central Europe, the Balkans—these places had endured four or more decades of totalitarian rule in which practically all individual liberties had been suppressed. Their economies were dominated by antiquated factories that produced useless goods; entrepreneurial energies were principally devoted to scamming the communist system. Nor were the precommunist records of these societies especially impressive. While a few had limited experiences with democratic government before World War II, many were dominated by strongmen, corrupt monarchies, or forms of military rule.

Most of these societies are now into their third decade of democracy. Corruption remains a serious problem throughout the region, and some governments have been dysfunctional in other ways. Certain states in the Balkans are still recovering from war and dislocation in the 1990s. But the people of Central and Eastern Europe on the whole can speak freely, have access to a wide variety of media, worship as they please, join together to seek reform, and vote to replace corrupt or ineffective leaders. The impact of extremist movements on national politics is generally no worse than that of the steadily growing number of anti-immigrant nationalist parties in Western Europe. While some countries have been battered by the European financial crisis, the new democracies have not experienced authoritarian reversals of the type seen in other regions, such as the rise of left-populist regimes in parts of Latin America.

The EU deserves much of the credit for the progress toward a Europe that is free and whole. It made the decision to open its doors to countries whose future political stability was questionable. It set clear standards for democratic governance, human rights, and civil liberties, and then insisted that the standards be met before formal membership was approved. And while the EU’s ability to enforce its rules in backsliding countries after they’ve gained admission is limited, it has pressured governments to revise laws that breach EU norms or enable rampant corruption.

More recently, the EU has taken on a more complicated project. It has invited six Eurasian countries to sign partnership agreements that could lead to EU membership at some future date. At present, most of these countries do not appear to be promising candidates for accession. Two—Azerbaijan and Belarus—are outright dictatorships. Another, Moldova, is a fragile democracy with one of Europe’s poorest economies. Armenia has a record of mediocre governance, limited political competition, and widespread corruption. Georgia seems to be moving toward a strengthened democracy, though its durability remains open to question. Ukraine has faced growing repression since the election of President Viktor Yanukovych in 2010.

There is a substantial gap between the six Eastern Partnership countries and the formerly communist EU member states, not to mention the EU states of Western Europe. The graph below is drawn from data in Nations in Transit (NIT), Freedom House’s annual report on political reform and democratization in the former communist world. NIT assesses seven indicators: Electoral Process, Civil Society, Independent Media, National Democratic Governance, Local Democratic Governance, Judicial Framework and Independence, and Corruption. The numerical ratings range from 1, the best possible result, to 7, the worst. The Democracy Score for a given country is an average of its results on the seven categories.

The graph looks at three groups of countries. First, it provides averages of the NIT ratings and Democracy Scores for the existing EU member states in the region: Estonia, Latvia, Lithuania, Poland, Czech Republic, Slovakia, Hungary, Romania, Bulgaria, Slovenia, and Croatia. Second, it displays the averages for the four Eastern Partnership invitees that are designated as Partly Free in Freedom in the World, thus excluding the two dictatorships, Belarus and Azerbaijan. Finally, it shows the averages for all six Eastern Partnership countries. 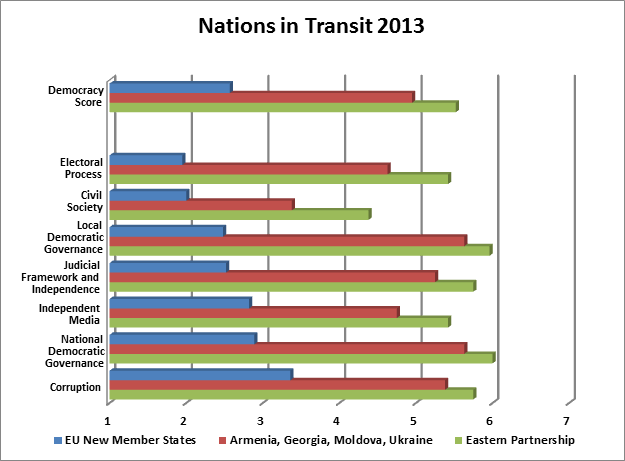 The data show that even when the worst performers are eliminated, there is still a major gulf between the new EU states on the one hand and the Eastern Partnership countries on the other.

A substantial difference in democracy standards is evident in each of the seven categories. Particularly noteworthy are the shortfalls in two categories that are critical to stable democracy: National Democratic Governance—reflecting the overall ability of an elected government to reach decisions and meet the most important political challenges—and Judicial Independence.

Unfortunately, the run-up to this week’s Eastern Partnership summit in Vilnius has been dominated not by discussion of the prospects for enhanced freedom and prosperity in Eurasia, but by the Kremlin’s campaign of threats and bribery to stop the project in its tracks and ensure that the countries on Russia’s periphery tie their political and economic futures to Moscow, and not Brussels.

On the surface, the customs union that Vladimir Putin is avidly promoting is restricted to economic relations between the former Soviet states. But the political destiny of the region is very much at stake as well. Putin is uneasy, to put it mildly, with neighbors who conduct honest elections, permit freedom of speech, and observe the rule of law. The political requirements of EU membership are a matter of public policy; the political implications of participation in the customs union will be unstated but clearly understood. This is why the collapse of the EU negotiations with Ukraine is so thoroughly deplorable. If Kyiv decisively turns toward Russia, not only will the Ukrainian economy be tied to a counterpart that is much smaller than the EU’s and overwhelmingly dominated by a corrupt energy sector, but the Ukrainian government will be further influenced by a leadership that prefers authoritarian repression to the sort of democratic change that has so demonstrably improved the rest of Europe.