Home » News » Blog » Democratic Gains under Threat in the Maldives

Democratic Gains under Threat in the Maldives

Five years ago, the Maldives elected a new leader in the first free and fair balloting in the country’s history. Mohamed Nasheed, a former political prisoner and leader of the Maldivian Democratic Party, triumphed over the long-serving incumbent, Maumoon Abdul Gayoom, in the second round of a competitive multiparty election. As a result of the poll—as well as constitutional reforms enacted earlier in the year that protected a broad range of civil rights—the Maldives experienced a dramatic improvement in its level of freedom, and was rated as Partly Free for the first time in decades in Freedom House’s annual Freedom in the World report.

Although a number of Nasheed’s reform initiatives were blocked by a divided legislature in the years that followed, the country did experience a continued expansion in freedoms for the media and civil society. 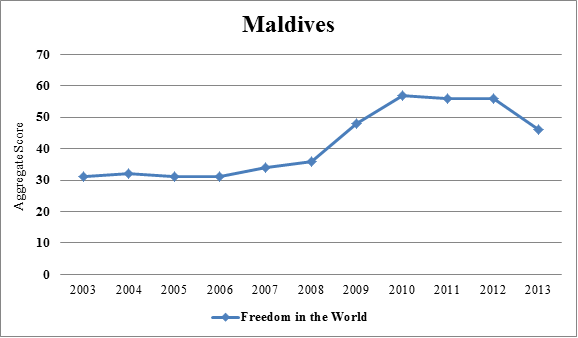 However, these gains now hang in the balance. In February 2012, Nasheed was removed from power in what he and many observers described as a quasi-coup organized by a combination of political opponents and elements within the military, police service, and judiciary. Hundreds of Nasheed’s supporters were attacked and detained by security forces during protests that continued throughout the year. Nasheed himself faced a politicized court case and briefly took refuge in the Indian embassy in Male in early 2013, before a court issued a stay on the case.

A presidential election was scheduled for September of this year, and it was hoped that the vote might help resolve the political impasse and ease polarization that has intensified since Nasheed’s ouster. In the first round, held on September 7, Nasheed led with 45 percent of the vote, but he failed to win enough votes to avoid a runoff. Abdullah Yameen, a half-brother of former president Gayoom, won 25 percent, while Gasim Ibrahim, a tycoon and resort owner, finished third with 24 percent. Sitting president Mohammed Waheed Hassan, who had risen from the vice presidency when Nasheed was removed, polled only 5 percent. Voter turnout was a strong 88 percent, and the process was widely lauded as free and fair by both local and international monitors, including the independent Election Commission.

In the two months since the first-round voting, however, the democratic process has unraveled. Gasim challenged the results, and the Supreme Court issued rulings—based largely on a secret police report—that first postponed the second round, which had been scheduled for September 28; then ordered the police to halt the Election Commission’s preparations; and finally nullified the results of the September 7 balloting.

A fresh election was scheduled for October 19, to be overseen by the police and governed by a set of 16 guidelines laid out by the Supreme Court. However, two of the three prospective candidates—Gasim and Yameen—refused to sign the revised voter registry. The police consequently refused to assist in conducting the election, forcing the Election Commission, on the very morning voting was to begin, to postpone it yet again. The repeat first-round vote is now scheduled for November 9, just two days before current president Waheed is supposed to step down. It is anyone’s guess as to whether these polls will actually take place. As of today, Gasim and Yameen have yet to approve the voter registry as required by the Supreme Court’s guidelines.

It appears that the same alliance of forces—Nasheed’s political opponents, the judiciary, and the police—that colluded to remove him from power in 2012 are once again working together to ensure that he will not be able to return to office via the ballot box. Last year, the international community issued weak protests and mild criticism in response to Nasheed’s ouster, ultimately recognizing Waheed’s government. Now that the Maldives faces a much clearer threat to its nascent democratic institutions, it is essential that all governments and other international actors who support human rights condemn this attempt to hijack the electoral process and urge that the people’s will be respected. Otherwise, the flowering of democracy in the Maldives that began in 2008 will prove to have been a brief interlude.