Despite Protests, Business as Usual in Kazakhstan | Freedom House
Skip to main content

Home » News » Blog » Despite Protests, Business as Usual in Kazakhstan

Despite Protests, Business as Usual in Kazakhstan

by Katherin Machalek and Sylvana Habdank-Kołaczkowska*

Germany’s Chancellor Angela Merkel will meet today with Kazakhstan’s President Nursultan Nazarbayev to sign a strategic agreements focused on energy and raw materials. Merkel, whose country has been cultivating access to Kazakhstan’s natural resources for some time, is not likely to devote much of the discussion to her guest’s domestic troubles. Nazarbayev prefers to present Kazakhstan as an eager business partner, committed to its international obligations and open to gradual reforms, and foreign governments and companies often have an economic interest in accepting this image at face value. However, recent events suggest that popular frustration with the country’s authoritarian system is becoming more difficult to ignore.


On January 28, hundreds of Kazakhs—some estimates put the figure as high as 1,000—took to the streets of Almaty in a rare antigovernment protest, shouting for their leader to leave office. Such demonstrations are exceedingly unusual in Kazakhstan, where most forms of political organization are effectively banned, and the president, affectionately referred to as “Papa” by his people, enjoys an official approval rating of nearly 90 percent. But the veneer of contentment was cracked on December 16, when police in the western city of Zhanaozen opened fire on striking oil workers, killing at least 17. The confrontation occurred as authorities attempted to mount independence day celebrations in the town square, which the workers had occupied for some seven months. The violence, captured on video, sparked public outrage and led to a harsh security clampdown in the surrounding area.

Worker protests gained momentum over the subsequent weeks, spreading throughout Kazakhstan’s western oil region and taking on a distinctly antigovernment tone. A union organizer told the New York Times that the protests were “no longer about money.” After the shootings, he said, “it was about dignity. After so many months [of strikes], the economic questions fell by the wayside.” Thus by January 28, protesters were chanting “Freedom!” and “Nazarbayev must go!” 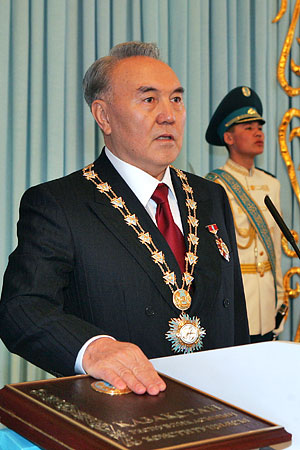 Nevertheless, Nazarbayev’s 20-year-old regime appears satisfied with its existing, well-tested playbook. It continues to embrace the rhetoric of democracy and devote considerable resources to portraying itself as a democratic state, both at home and abroad. Despite the steady decay of its democratic institutions, which at this point exist in name only, and the deterioration of its already appalling human rights record, Kazakhstan’s massive energy wealth and careful balancing of relations with all world powers mean that it rarely faces serious scrutiny or criticism from the international community. In a sign of foreign governments’ priorities, Kazakhstan was awarded the rotating chairmanship of the Organization for Security and Cooperation in Europe (OSCE) for 2010, over the objections of human rights organizations.

Meanwhile, in the absence of external pressure, Nazarbayev has been employing the usual tricks to paper over the damage to his domestic stature caused by the unrest in Zhanaozen. For example, the president vetoed a January 6 decision by the Constitutional Council to cancel the January 15 parliamentary elections in Zhanaozen, where a state of emergency had been declared. He explained that the decision would have violated the voting rights of the city’s residents. Given the fact that the Constitutional Council is appointed by the president and his rubberstamp parliament, the ruling and veto were most likely conjured up for the benefit of Nazarbayev’s image management.

Another old strategy can be seen in the outcome of the January 15 vote. Nazarbayev’s Nur Otan party had monopolized the parliament since 2007, making it an easy target for criticism. A reform law in 2009 paved the way for a return to a tightly controlled multiparty system, guaranteeing the second-place party seats in the parliament even if it does not reach the 7 percent vote threshold. In the January 2012 elections, the regime paid another ostentatious but ultimately meaningless tribute to pluralism by reporting that not one but two parties other than Nur Otan had passed the 7 percent barrier. Needless to say, both of these parties—the business-oriented Ak Zhol and the Communist People’s Party of Kazakhstan—are decidedly pro-Nazarbayev. Leaders of Kazakhstan’s genuine opposition parties, Alga and Azat, were quickly arrested as protests challenging the election results emerged in the weeks following the vote.  But the news that one-party rule was ending in Kazakhstan made headlines at an opportune moment for the regime.

The president’s calculated response to the recent, embarrassing eruption of dissent in his country will have been familiar to anyone who observed the staged drama surrounding his future status in early 2011. Preempting any Arab Spring–inspired democratic sentiment, he feigned humility and allegiance to democratic values by vetoing a long-anticipated constitutional amendment that would have triggered a referendum to extend his current term until 2020. After the one-party parliament rejected its leader’s veto just one week later, Nazarbayev appealed to the Constitutional Council, which ruled that the proposed amendment did, in fact, violate the constitution. (The council also politely noted that the president should feel free to reject its decision.) As an alternative to the proposed term extension, Nazarbayev called for a snap presidential election in April, almost two year ahead of schedule, catching the opposition unprepared. The president explained that his plan took account of both “the will of our people and fidelity to democratic principles.” With the elaborate performance finally completed, Nazarbayev enjoyed another landslide victory, confirming his presidency through 2016 while promoting the narrative of a modest leader bound by the checks and balances of a genuine democracy.

As in Russia, where restive citizens are contemplating the possibility of another six or even 12 years under the rule of Vladimir Putin, Kazakhstan’s people may be losing patience with their 70-year-old eternal leader. Signs point to an escalation in protests, with another unsanctioned antigovernment rally scheduled for February 25. But with little outside pressure, ample resources, and a glaring lack of new ideas, Nazarbayev and other authoritarian leaders of the former Soviet Union are simply recycling their time-honored tactics, apparently holding fast to the assumption that the next decade will be much like the last. Given what has happened in the Middle East over the past year, interested parties like Merkel would be wise to start hedging their bets.

* Katherin Machalek is a research analyst, and Sylvana Habdank-Kołaczkowska is the project director, for Nations in Transit.