On December 1, Kyrgyzstan inaugurated Almazbek Atambayev as its new president in the country’s first orderly transfer of power since independence. Atambayev won more than 60 percent of the ballots in an election that monitors from the Organization for Security and Cooperation in Europe (OSCE) characterized as peaceful, though suffering from significant irregularities, particularly in the vote tabulation process and the compiling of voter lists. 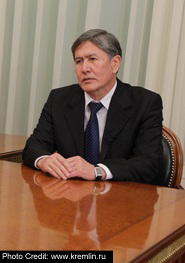 In his electoral campaign, Atambayev promised to restore stability and strengthen ties with Kyrgyzstan’s neighbors and “strategic partners,” including Russia. However, the concrete steps he has proposed will leave many wondering what the new president means by “stability.” Thus far, the only goals Atambeyev has articulated are membership in a Russia-dominated customs union with Belarus and Kazakhstan, closure of the U.S. air base at Manas, and an end to the Soviet-era practice of specifying ethnicity on passports. The question of accountability for perpetrators of last year’s ethnic violence was conspicuously absent from Atambayev’s campaign and inaugural address. Until this is remedied, the public will continue to believe that the government is either unwilling or unable to uphold the rule of law.

No one can blame Atambayev for focusing his campaign message on stabilizing and unifying the country. Kyrgyzstan experienced revolutions in March 2005 and April 2010, and an eruption of ethnic violence killed more than 400 people in June of last year. The interim government at the time, led by Roza Otunbayeva, struggled throughout its tenure to cope with this violence, but it never managed to gain real control over local authorities in the south, who have been accused of participating in, and in some cases initiating, Kyrgyz attacks on the ethnic Uzbek minority. People on the ground told Freedom House that the temporary status of Otunbayeva’s leadership led many local leaders to hedge their bets and ignore or delay implementing her policies. In June, human rights groups reported that of the nearly 300 people arrested in connection with the riots, roughly 85 percent were ethnic Uzbeks.

Atambayev now has six years in which to make strides where Otunbayeva’s brief presidency could not. He could launch a thorough, inclusive, and transparent investigation into the southern violence, bringing the perpetrators to justice regardless of their ethnicity or positions in the security forces or local administration. Just as importantly, the government could monitor the aftermath of the violence, supervising the process through which homes and property are returned to their owners. In many instances, local officials have prevented residents of the southern Osh region from rebuilding homes on the property they legally own. New efforts to widen roads may also fuel Kyrgyz-Uzbek tension, as the planned construction will disproportionately affect Uzbek property.

Playing an active role in the reconciliation process might not make Atambayev popular with all of his electorate, but it is an essential step toward creating genuine stability in the country. By contrast, simply removing ethnic designations from passports will only have meaning when the system as a whole is similarly blind to such differences. Until then, symbolic gestures intended to emphasize unity may ring hollow and even polarize the population further. For example, Atambayev chose to deliver his hour-long inaugural address almost entirely in Kyrgyz, a language that many ethnic Kyrgyz—particularly in Bishkek—speak with difficulty, and that most non-Kyrgyz, who amount to roughly 30 percent of the country’s population, do not understand. Atambayev switched briefly to Russian when declaring his intention “to create conditions for the development of the cultures and languages of all nationalities” in Kyrgyzstan. He also declared that “those who try to divide people by nation or by region are enemies of the country.”

As the leader of a country that is still in a period of transition, Atambayev must deftly juggle competing priorities in the coming months. While significant doubts remain as to the benefits of the Moscow-led customs union, the development and expansion of Kyrgyzstan’s relations with Russia and neighboring states in Central Asia will be critical to its economic and security concerns. However, the country will have to look elsewhere for a model of inclusive politics and respect for human rights, as these regimes have pursued a dubious form of “stability” that entails highly centralized power and repressive control at the expense of democracy and the rule of law. Through its successive revolutions, Kyrgyzstan has demonstrated its resistance to such entrenched authoritarian leadership. But the interests of the population are not well served by an endless cycle of oppression and upheaval.

The founding principles of the OSCE underscore the importance of human rights protections as a necessary component for any enduring and meaningful stability. The peaceful election and inauguration of Atambayev is a monumental achievement for Kyrgyzstan, but it must be followed up with substantial efforts to increase the transparency and inclusiveness of the political system, and ensure equal protection for all citizens. The new administration should focus in part on executing difficult legal reforms, such as the completion of a new law on freedom of association, which has long been under development and remains far from perfect.

Meanwhile, Kyrgyzstan’s international partners must urge Atambayev to lead his country in a democratic direction and more clearly define his plan for long-term stability, including precise steps—spelled out in Kyrgyz, Uzbek, and Russian—toward ending impunity for the 2010 ethnic violence and reforming the country’s laws and institutions. Only by putting pluralism, justice, and human rights at the forefront of its development agenda can Kyrgyzstan break free from its pattern of stagnation and revolution and avoid the even worse fate of its ossified authoritarian neighbors.