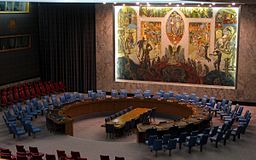 Over the last month, much has been made of Venezuela’s likely election to a seat on the UN Security Council when General Assembly members vote on October 16. The Washington Post proclaimed that Venezuela doesn’t deserve the seat because of its dismal human rights record, and the New York Times warned that the seat would “give the Maduro government an important and prestigious appointment on a body that is expected to tackle critical issues, including the global response against fighters of the Islamic State.” While these are well-founded concerns, they raise the more unsettling question of why democratic countries in Latin America have tacitly supported Venezuela’s nomination.

As part of the Security Council, Venezuela can be expected to be a nuisance to the United States and a mouthpiece for Russia’s Vladimir Putin and Syria’s Bashar al-Assad. But its term, like those of other nonpermanent members, would last just two years. The deficit of regional leadership that enabled its nomination, by contrast, could have repercussions for decades to come. Latin America’s unanimous decision not to challenge Venezuela’s nomination is just the latest example of the region’s democratic paradox: Despite its near-complete embrace of democracy, it lacks vocal supporters of adherence to democratic principles and ardent defenders of fundamental human rights.

A variety of factors have contributed to this growing silence on human rights, but chief among them is diplomatic convenience. In recent years, the region’s leaders have increasingly sidestepped thorny human rights issues in favor of political expediency, peddling a number of misconceptions to excuse their inaction. Nowhere has this pattern been more evident than in their dealings with Venezuela.

One favored misconception of Latin America’s democratic leaders is the idea that respect for a nation’s sovereignty and criticism of its government’s actions are mutually exclusive. When protests broke out in Venezuela in February, Brazil’s President Dilma Rousseff declared, “It’s not Brazil’s role to tell [Venezuela] what to do, since that would violate our foreign policy. Brazil doesn’t comment on the internal situation of any country…. For Brazil, it is very important to always look at Venezuela from the point of view of its achievements.” In her statement, President Rousseff conveniently ignored the obvious distinction between intervening in another country’s affairs and fulfilling her obligation, as a regional leader, to speak out when the rights of citizens in that country are under threat.

This distinction was again overlooked in March when every Organization of American States (OAS) member, with the exception of the United States, Canada, and Panama, signed on to a statement declaring support for the government of Nicolas Maduro and affirming the “principle of nonintervention in the domestic affairs of states.” The declaration came in response to violent repression that resulted in more than 40 deaths and the detention of thousands of Venezuelans, carried out principally by Venezuelan state officials and government-affiliated “colectivos,” and well documented by domestic and international organizations. The OAS leaders’ choice to frame the question as one of “nonintervention”—rather than issue a meaningful statement urging the government to reconsider its heavy-handed approach—sent a strong message that political expediency trumps commitment to human rights, even among many of the region’s most democratic leaders.

Another misconception is the notion that regional integration can and should occur independently from democratic development. The last 10 years have witnessed a proliferation of regional groupings, including the creation of UNASUR and CELAC and the expansion of Mercosur. These institutions share the goal of binding the region together through increased trade and solidarity, but in most cases they eschew more complex issues like the human rights records and democratic performance of member countries.

Those who disagree with this assessment might point to Paraguay’s suspension from Mercosur in 2012 following the controversial impeachment of then president Fernando Lugo. However, the temporary removal of a country that is notoriously weak in diplomatic terms—which enabled Venezuela’s long-awaited acceptance into the group—can hardly be deemed proof of the democratic bona fides of these institutions. Moreover, after its acceptance, Venezuela’s leaders have used Mercosur, UNASUR, and CELAC to promote a distorted narrative of their human rights record.

The decision in July to nominate only Venezuela for Latin America’s open UN Security Council seat, allegedly under a closed-door agreement whereby the seat would rotate among the countries in the region to ensure regional unity, is representative of this trend of prioritizing solidarity and nonconfrontation above all else.

Greater emphasis on regional unity has also coincided with diminished respect for preexisting human rights institutions, such as the OAS’s Inter-American Commission on Human Rights (IACHR) and Inter-American Court of Human Rights. The OAS has long been considered by some governments in the region to be an outdated and even “imperialistic” institution, but recent years have featured far greater hostility toward the organization’s human rights arm, including attempts to defund the IACHR and undercut its mandate in 2012 and 2013. Venezuela’s important role in this effort and its decision to denounce the American Convention on Human Rights in 2013 have weakened the institution and limited its ability to provide recourse for Venezuelan citizens whose rights are under threat. The participation of some of the region’s most democratic countries in this destructive campaign, including Brazil, and the silence of others like Chile throughout the process, have dealt a devastating blow to hopes that Latin America would become more engaged and outspoken on human rights issues.

Assuming Venezuela receives support from two-thirds of the UN General Assembly members when they vote on October 16, it will join the Security Council for the next two years. The seat would complement the position it holds until 2016 on the UN Human Rights Council (UNHRC) and bolster its position in defense of Assad, Putin, and other leading human rights violators.

Venezuela’s nomination is disappointing because it was avoidable. Latin American leaders have shown an impressive ability to lead positive initiatives on the global stage, most recently through a UNHRC resolution on LGBT rights spearheaded by Brazil, Chile, Colombia, and Uruguay. Yet this has not translated into leadership on broader democracy and human rights issues or willingness to criticize countries like Venezuela for their consistent violations of the freedoms of expression, association, and assembly.

What is needed in the region is not a radical shift, but rather a simple recognition that what leaders say does matter and can influence other governments’ political calculus in a meaningful way. Working behind the scenes, as many of these leaders have suggested they are doing, is not enough. Established democracies like Chile and Brazil need to be more assertive at critical moments, like that presented by Venezuela’s candidacy to the UN Security Council, to send a message that Latin America’s heads of state are being watched and will be held accountable by their neighbors.