As Others Falter, Tunisia’s Transition Pushes Ahead | Freedom House
Skip to main content

Home » News » Blog » As Others Falter, Tunisia’s Transition Pushes Ahead

As Others Falter, Tunisia’s Transition Pushes Ahead

The world has watched in despair as the promising 2011 uprisings against authoritarian leaders across the Middle East have met with fatal setbacks or gone badly awry. In the absence of sustained international support, these movements for political freedom have been crippled, warped, or crushed by enemies old and new. Less noticed has been the case of Tunisia, the country that started it all. Although it has run into repeated delays and crises, the transition in Tunisia has so far muddled through without major violence, and the country remains on a path to become the Arab world’s first stable democracy.

After two prominent opposition leaders in Tunisia’s National Constituent Assembly (NCA) were assassinated this past March and July, tensions increased between the country’s secularists and the ruling Islamists, whom many blamed for the murders. The incidents prompted a lengthy standoff, with the opposition demanding the resignation of the government headed by the Islamist party Ennahda. Although the two sides agreed in October on a four-week roadmap for resolving the transition’s outstanding issues, the very first task—the selection of an interim prime minister to run the country until elections—was completed only on December 14. The original deadline for the decision was November 1. Similarly, the deadlines for the subsequent steps have long since been broken: electing nine commissioners to lead the Independent Board of Elections by November 8, finalizing Tunisia’s electoral law and calendar by November 15, and adopting a new constitution by November 22. But if the process to date is any guide, these milestones will be reached eventually. 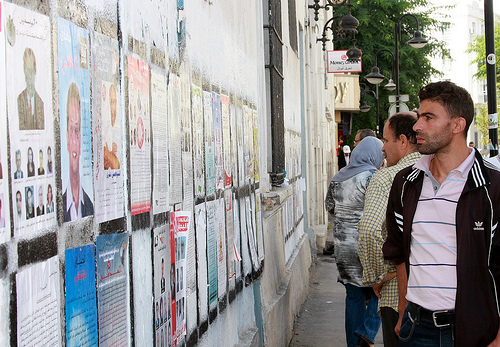 Tunisia differs from the more headline-grabbing case of Egypt in that its political transition, while in some disarray, has generally been conducted in accordance with laws and procedures agreed upon by most political parties. Tunisia’s leadership has made a greater effort to be inclusive than any Egyptian faction, as evidenced by Ennahda’s coalition building and its willingness to step down from power, albeit reluctantly, and engage others in the constitution-drafting process. Tunisia’s civil society and party system is much more developed than Egypt’s, meaning citizens are more engaged and invested in the political process. Finally, Tunisia’s military has largely refrained from intervening in the transition, while maintaining a focus on security in the country. Tunisia’s civilian leaders are consequently free to negotiate, compromise, and make necessary political changes based on the demands of the public alone.

At this point, Tunisia is further along in the democratization process and more likely to succeed than any of its regional counterparts. It could ultimately prove that democracy is not just possible but overwhelmingly preferable in a part of the world dominated by monarchs, generals, and the extremists they foster. Conversely, if it is allowed to fail, the prospects for democracy and stability across the region would dim. The international community, which has generally left reformers at the mercy of their opponents in the more difficult cases, cannot permit this to happen in Tunisia.

As with the expansion of democracy in Europe and other regions, the involvement of foreign actors can encourage Tunisian political leaders to take the steps and make the compromises necessary for a successful transition. Once the political situation is settled, with a widely accepted constitution and permanent elected institutions, the struggling economy will be well positioned to improve, generating more stable and prosperous conditions.

With the recent selection of a caretaker prime minister, Tunisia appears to be getting back on track, but this is all the more reason for the international community to stay involved, rewarding progress and stemming any setbacks. Examples like Egypt and Syria have shown that when failures compound through international neglect, the costs of any solution increase dramatically.

Jessica Kosmider, a former Freedom House intern, is currently a student at the University of Wisconsin–Madison.