A Plan to Tame Civil Society in Armenia

As Armenia prepares for a presidential election on February 18, the international community should direct its attention to a recent proposal by a presidential advisory body that—if implemented—would drastically increase government control over civil society in the country.

Upon taking office in 2008, President Serzh Sargsyan faced a legitimacy crisis. The opposition had disputed the official results of the February election, and a government crackdown on postelection protests killed several people. In an attempt to repair the rift with society, Sargsyan embarked on a dialogue with nongovernmental organizations (NGOs) and ordered the creation of the Public Council, modeled on a similar consultative body in Russia, to serve as an interface with civic groups. However, as with his Russian counterpart, Vladimir Putin, his true intentions were to find another way to suppress civil society. Here, the Public Council has been a useful tool.

In October 2012, the council produced a “concept paper” that contains several worrying provisions. First, it suggests creating a single fund through which the government could regulate all NGO financing, including from foreign donors. This idea has an all-too-familiar ring. 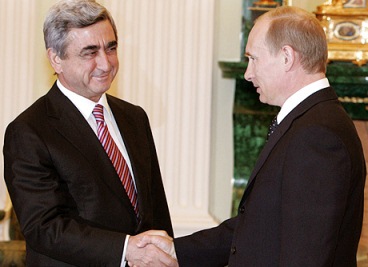 In July 2012, the Russian parliament passed a law requiring foreign-funded NGOs to register as “foreign agents”—a term synonymous with “spy” in Russia. The law formed part of Putin’s broader crackdown on civil society since returning to the presidency in May, which also included expelling the U.S. Agency for International Development (USAID) from Russia in October.

However, Armenia, unlike Russia, is dependent on Western loans and aid. Since 1992, the United States alone has provided Armenia with around $2 billion in development and humanitarian assistance. In 2011, U.S. funding was reduced when the Millennium Challenge Corporation penalized Armenia for failing to enact political reforms, although the European Union (EU) increased its aid package to Armenia and launched, in February 2012, negotiations for a Deep and Comprehensive Free Trade Agreement (DCFTA). Due to its reliance on such relationships, the Armenian government cannot resort to measures identical to Russia’s, but it is attempting to control the distribution of Western funds.

State control would mean more funding for so-called GONGOs—government-organized NGOs. These groups support the authorities, mimic a genuine civil society, and stifle real democracy by crowding out legitimate independent voices. They are ideal for a government that wishes to appear democratic but retain control in reality.

Armenia’s real civil society groups know that the Public Council does not represent them. According to Boris Navasardyan, president of the respected Yerevan Press Club, the council’s agenda “is only what the president wants, so if the president doesn’t like it, it’s dead.” Tsovinar Nazaryan, an activist for human rights in the Armenian military and a former journalist, argued that “the authorities launched the council to pretend that they want to be connected to the public,” adding, “They gave some positions to some old intellectuals to secure their loyalty.”

The Eastern Partnership Civil Society Forum (CSF) issued a statement on November 30, 2012, expressing concerns about the Public Council’s civil society concept and warning that it would have the effect of undermining “the idea of freedom of association, alienating independent watchdog organizations, silencing critical voices, and substituting broader and genuine public participating with imitated democracy.”

The statement noted that the civil society concept “was especially concerning as it followed and was partially based on earlier disseminated draft recommendations of the EU Advisory Group to the Republic of Armenia, aimed at strengthening the civil society.”

This advisory group had presented a policy paper in Yerevan on September 27–28, 2012, that provided examples of government documents aimed at strengthening civil society, such as the Estonian Civil Society Development Concept and Britain’s civil society “Compact.” The Public Council twisted these ideas to create an instrument with which to silence civil society instead.

The presidential election in February should help clarify whether the civil society concept paper will become law, and if so, in what form. If the vote is free and fair, winning the endorsement of international observers, it would strengthen the government’s legitimacy. If the administration then shows interest in conducting real reform and further developing its relationship with the United States and the EU, including through the DCFTA, real civil society would have more leverage in pushing against the Public Council. Western support would be especially crucial in that effort.

However, if the government moves away from the West and the concept paper becomes law, Armenia would edge further toward authoritarianism, joining the list of countries that are losing in the struggle for freedom. Such a setback would also have regional implications. Armenia would likely strengthen its already close ties with Russia and Iran, which would hurt U.S. and European interests in the Caucasus and beyond. All this is good reason for the democratic world to pay attention to the Public Council and its civil society initiatives, and to remain committed to supporting real democracy in Armenia.

* Anna Borshchevskaya, an assistant director at the Atlantic Council’s Dinu Patriciu Eurasia Center, was an IREX grant recipient in Armenia.