Prime ministers in the dock

*With assistance provided by Elizabeth Kagedan

About a year ago I attended a meeting whose purpose was to showcase newly elected Ukrainian president Viktor Yanukovych before an audience consisting mostly of representatives of the world’s largest multinational corporations. Yanukovych’s remarks were carefully crafted to appeal to these guests. But he devoted the bulk of his presentation to an explanation of his commitment to the strengthening of Ukrainian democracy. Ukraine, he declared, would be Western-oriented under his watch. He promised to protect freedom of the press, minority rights, and—here he was especially emphatic—the rule of law.

Following his address, Yanukovych was asked whether he felt that the Orange Revolution had left lasting achievements for the country. His response made it clear to all that, in his view, there was nothing good for Ukraine in the Orange legacy. The message was delivered cordially, but the words came from a man who deeply resented the movement’s role in barring his fraudulent path to the presidency in the 2004 election.

Now we have the conviction and sentencing —to seven years in prison, no less—of former prime minister Yuliya Tymoshenko, who was tried, basically, for having negotiated an unfavorable energy agreement with Russia during her time in office, plus the announcement that an entirely new and serious corruption case is being brought against the former leader of the Orange forces. The conviction comes in the midst of sensitive talks between Ukraine and the European Union over a free trade agreement, and&nbsp; European leaders like Carl Bildt and Catherine Ashton have made clear that they regard the prosecution of Tymoshenko as politically motivated and a blatant misuse of the legal system. But it appears that for Yanukovych, sidelining a nettlesome political adversary and exacting revenge for the Orange Revolution have taken precedence over foreign policy priorities and his own vow to ensure that the rule of law prevails.

In punishing Tymoshenko, the Yanukovych administration has joined a growing list of governments that are using the criminal justice system to punish former leaders. Former prime ministers, presidents, cabinet ministers, and the heads of opposition parties—all political enemies of those in power—have faced criminal charges or been threatened with prosecution. 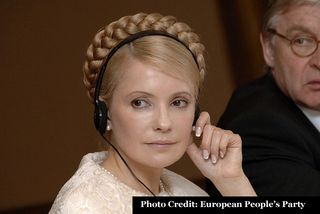 his is a new and disturbing trend. The prosecution of former leaders suggests an environment in which a rotation of power through elections—fair or otherwise—took place, and most of the current examples are to be found in countries that, like Ukraine, have at least some features of democratic governance.

In one notable case, General Sarath Fonseka was convicted of various crimes after having challenged Sri Lankan president Mahinda Rajapaksa in the 2010 election. Fonseka was in charge of the Sri Lankan military during the final stages of a decades-long war against the Tamil Tiger rebel group. In the wake of the government forces’ victory, he broke with Rajapaksa and became the opposition’s presidential candidate. Fonseka was soundly defeated at the polls, but after he challenged the results, he was charged with crimes that included corruption and plotting a coup.

President Evo Morales of Bolivia has gone several steps further. During his presidency, criminal charges of various sorts have been leveled against several of his predecessors, as well as a number of cabinet ministers in previous governments. This past September, Morales announced further investigations, this time focusing on the privatization of the country’s hydrocarbons industry a decade ago. Among the targets are two former presidents and several of their ministers.

In Hungary, officials of the Fidesz government of Prime Minister Viktor Orbán have indicated that they are considering charges against no fewer than three former prime ministers for “criminal” mismanagement of the economy. In a somewhat similar case, Iceland, a country with a strong devotion to civil liberties, is preparing to try Geir Haarde, who was serving as prime minister in 2008 when first the banking system and then the economy collapsed. A formal indictment was approved by Iceland’s parliament in September. It charges that Haarde showed “serious nonfeasance … in the face of major danger looming over Icelandic financial institutions and the state treasury.” A member of the parliamentary committee that prepared the charges added that “the wrong thing he did was to do nothing.” Haarde faces two years of imprisonment if convicted.

These examples suggest that we may be witnessing a new phenomenon, what one analyst called “criminal prosecution for political motives.” This trend is all the more disquieting because it is taking place in countries that either boast genuine democratic credentials or aspire to acceptance as members of the democratic community.

It hardly needs to be noted that in any democratic setting, the powerful should be held to account for their actions. In Taiwan, former president Chen Shui-bian was convicted in 2009 of using his position for personal enrichment, and it is generally agreed that real crimes were punished in a series of cases against him.

Yet the Taiwan case reminds us of the awesome challenges these trials of former leaders pose for societies that adhere to democratic norms. While most observers felt that some of the charges brought against Chen had merit, outside legal experts raised que stions about certain aspects of the corruption cases brought against Chen and other leaders of the Democratic Progressive Party.

Several of these cases—certainly those in Hungary and Iceland, and in Ukraine as well—are driven in part by popular outrage over economic decline. And clearly there are voters in every country suffering from high unemployment rates and waves of home foreclosures who want those responsible to pay for their actions. This makes it all the more important to emphasize that, under the rule of law, political leaders should not be treated as criminals simply for brokering bad treaties, showing poor judgment, or “doing nothing” to prevent subsequent crises.

Why should we care about the fate of mediocre, incompetent, or polarizing political leaders? To begin with, a lack of faith in the justice system has been a curse for countless new democracies, and nothing reinforces popular cynicism more than the persecution of the opposition. There is also the danger that such courtroom vengeance will trigger a tit-for-tat response when the opposition attains power, raising the stakes of elections to the point that poll rigging, removal of term limits, and other authoritarian practices become palatable to those in government. Finally, there is the real possibility that talented and honest figures will opt out of electoral politics altogether if it comes to be seen as a hazardous profession. Those who remain—those who are most comfortable in dangerous environments—will not be politicians wedded to the standards of democratic government. Instead they will be more than willing to yield to the authoritarian temptation.