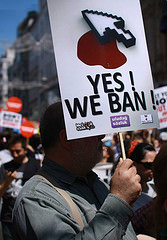 or as long as the global internet has withstood attempts by states to subjugate its cables, servers, and protocols, the virtual world has been a refuge for users who are deprived of their fundamental freedoms offline. This boon of technology is what led UN experts to declare the internet “an indispensable tool for realizing a range of human rights” and to debate whether access to such an engine of human progress constitutes a right in itself.

However, since Edward Snowden disclosed documents on secret U.S. and British data-collection programs, the internet has faced intensified challenges from all sides—some genuine and others opportunistic—that could lead states to partition the digital commons into national and regional demesnes.

An internet that is fragmented by political, legal, and technical boundaries would throttle the animating purpose of the International Bill of Human Rights, while an indivisible and global internet is able to facilitate such goals. As states fully fathom the internet’s disruptive power and rush to impose choke points in the name of national sovereignty, the digital world increasingly mirrors the analog world’s human rights deficiencies, which it once transcended. The virtual refuge is being dismantled, and for individuals on the wrong side of the new borders, it has been replaced with separate and unequal “splinternets.”

Such digital apartheid flies in the face of the universality of human rights, and it contradicts international jurisprudence that rejects separate-but-equal regimes. As the UN Human Rights Council has affirmed, “the same rights that people have offline must also be protected online.”

Champions of a unified internet are putting forth strong economic and geopolitical arguments to counter these challenges—including earlier this month at the ninth annual Internet Governance Forum (IGF) in Istanbul, Turkey, and next month at the International Telecommunications Union (ITU) plenipotentiary meeting in Busan, South Korea. But stakeholders often miss the bigger picture when they overlook the human rights case against a “Westphalian web” model of internet governance.
For example, when a recent critique of the “Balkanization” of cyberspace failed to address the human rights implications, an Iranian tech entrepreneur interjected to describe how such developments, well under way in his country, erode free expression and access to information and even mar the net’s utility. “Then the internet would be no different than TV or radio,” he said. “Content would be controlled from a centralized and state-approved authority, just like mass media.”

Although mass media are often recognized for their potential contributions to the advance of human rights, their role has been less vaunted than the internet’s, precisely because radio airwaves and television spectrum are so tightly controlled by both state and corporate interests. Little surprise then that as more states take steps to “domesticate” the internet, more online journalists, bloggers, and social-media users are confronting the same restrictive regulations that traditional media organizations have battled for decades, particularly in the 134 of 197 countries and territories rated Not Free or Partly Free in Freedom House’s latest Freedom of the Press report. Russia has advocated for state-based control of the internet under the guise of greater democratic governance, most famously at the controversial ITU summit in December 2012. Since then, however, the Kremlin has revealed its true ambitions to tighten its grip on individual liberties online through such draconian measures as the so-called “blogger law,” which requires end users with more than 3,000 daily readers to register with real identities and submit to the same regulations as mass media. While these initiatives will serve to alienate the swing states in the internet governance debate, they also instruct countries that are determined to nationalize the internet on how to advance their goal unilaterally.

Using domestic legislation to rein in internet users—which is identified as a worrying trend in the 2013 Freedom on the Net (FOTN) report—is a favorite device in the tech-savvy authoritarian’s toolbox. Turkey offers the most recent example of such legal crackdowns on internet freedom. Less than six months after blocking Twitter and YouTube and just days after hosting the IGF, Turkey’s parliament and President Recep Tayyip Erdoğan defiantly expanded the government’s (seemingly unconstitutional) powers to monitor internet users and block websites and content without a court order.

Other statist techniques for grafting offline controls onto the internet—used by autocrats, protectionists, and securocrats alike—include data localization (requiring companies to store “domestic” data on servers within a state’s jurisdiction) and interfering with user data located within or passing through national borders. Such interference ranges from digital gatekeeping (the opposite of net neutrality) to website blocking, content filtering, network disruptions, and online surveillance. These measures serve to disadvantage alternative voices and preserve the power structures of the physical world, violating two of the most widely recognized human rights in international law: equality and nondiscrimination.

Some states and regions moving in this direction claim to be acting in the best interests of their citizens by shielding their data from foreign intelligence agencies’ prying eyes and algorithms. But the true solution to excessive surveillance by countries like the United States and Britain is to reform the programs in question, not replicate national borders in cyberspace. Certain countries have pursued the latter agenda since the internet first became locally available, including China, Saudi Arabia, and the United Arab Emirates. This is why Freedom House’s FOTN report has observed a steady decline in global internet freedom and an increase in online censorship since its first edition was published in 2009—well before the Snowden revelations. Of the 60 countries assessed in the most recent FOTN report, 31 were filtering content and 24 had passed new laws or regulations to restrict free speech online, violate users’ privacy, or punish individuals who post certain types of content. Moreover, the overall number of censored websites worldwide increased.

Currently, three billion people around the world use the internet, and as the remaining four billion plug in, the rights to free expression, privacy, and access to information will need stronger protections. But any attempt to add such safeguards at the expense of a global, unified internet will certainly backfire, and not just for the 55 percent of the world’s population living in repressive countries. All netizens are harmed when the internet is segregated. Only those able to seek and impart ideas and information regardless of frontiers—as guaranteed by Article 19 of the Universal Declaration of Human Rights—actually enjoy an internet that is greater than the sum of its parts.