Syria and the Authoritarian Fraternity

The release of some 3,000 e-mail messages believed to be from the personal accounts of Syrian president Bashar al-Assad and members of his inner circle has shined a light on the cynicism and deceit of the dictatorial regime in Damascus. Assad is revealed to mock his own countrymen as well as the reforms he promised in response to the antigovernment protests that began a year ago. In the e-mails, he refers to these reforms as “rubbish laws of parties, elections, media.” That he offered them at all, of course, would seem to fly in the face of his long-standing assertion that the uprising is an assault by foreign-backed terrorists, as opposed to a legitimate demand for political change by Syrian citizens.

Despite the massive upheaval in the country, Assad and his wife Asma continue to enjoy a lavish lifestyle, reportedly circumventing sanctions to obtain tens of thousands of dollars’ worth of luxury items from abroad. Meanwhile, ordinary Syrians live in crushing poverty, increasingly lack basic provisions, and at any given moment face the possibility of instant or agonizing death, largely at the hands of their own government. The extent of the depredations in Syria is becoming clearer as more refugees escape to tell their stories.

The e-mails—which are still in the process of being definitively authenticated—show the warping and corrupting effects of unchecked power. But they also illuminate the ways in which authoritarian regimes close ranks, engage in knowledge sharing, and provide other forms of mutual support. In this instance, Iran is seen to be guiding and assisting its Syrian ally.

The Iranian succor, however, is only one piece of a larger package of aid provided by an authoritarian fraternity that includes Russia, China, and Venezuela.

The Assad emails, in Arabic and English (courtesy The Guardian) 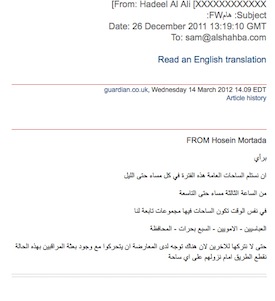 According to the e-mails, Iran has given Assad extensive advice on how to handle the Syrian uprising. Having engaged in a nearly three-year crackdown on its own democracy movement, the Iranian government is intimately familiar with the subject. Since the fraud-ridden presidential election of 2009, the already repressive government in Tehran has grown even more vicious. Thousands of journalists, opposition members, civil society activists, students, ethnic and religious minorities, and women have been arrested, jailed, and tortured during this period.

Russia, for its part, has taken a leading role at the United Nations in blocking meaningful action to stop the Syrian authorities’ wanton killing of their own people. Moscow is also overwhelmingly responsible for arming the Syrian regime. A just-released report on global arms transfers by the Stockholm International Peace Research Institute details how Russia has provided 72 percent of the military supplies obtained by the Assad regime over the past five years. The flow of arms has continued during the current bloodshed, even as Russian diplomats pay lip service to the need for a ceasefire.

Although China has been less vocal than Russia, Beijing has nevertheless aligned itself with Moscow to obstruct concerted UN action against the Assad regime. Chinese state media have also attacked efforts to organize an international response outside the United Nations, and downplayed the nature and scale of the Syrian crackdown.

Meanwhile, Venezuela has stepped in with a sanctions-busting energy lifeline to Damascus. Over the past several months, President Hugo Chávez has directed at least three critical fuel shipments to Syria. Venezuelan congressman Adel El Zabayar, a Chávez ally, was recently quoted as saying, “The decision of the [Venezuelan] government is to give all our support to Syria.”

It is worth emphasizing that the support provided by these leading authoritarian states is not intended to reduce the bloodshed within Syria’s borders. With each passing week, as the number of refugees streaming into Lebanon and Turkey grows, and as the antigovernment forces in Syria grow more radical in the face of state violence, it is less plausible even to argue that this assistance is aimed at enhancing regional stability, which is poised to be shaken further. There are an estimated 14,000 Syrian refugees in Turkey now. But the Turkish Red Crescent has indicated that it expects up to 500,000 Syrian refugees to enter Turkey.

Nor are the authoritarians’ efforts to rally around the regime in Damascus motivated by any sort of genuine camaraderie among dictators. Instead, the oil, arms, advice, and diplomatic cover are offered with the aim of disrupting any emerging pattern in which the world intervenes to halt autocratic crackdowns on pro-democracy protesters. These leaders understand that their rule ultimately depends on coercion and force, and that they could easily find themselves in Syria’s position. They are determined first to deny their people any further examples of successful or remotely peaceful uprisings, and second to ensure that in the event of their own popular unrest, the international community is already accustomed to wary inaction in the face of brutality. To achieve these ends, even an indefinite Syrian civil war in which Assad never fully regains control, or a disastrous takeover by Islamist extremists, might suffice.

If the world’s democracies are to uphold their own values and prevent the Arab Spring from dying a cruel death in Syria, they will need to display at least the same unity and tenacity as their authoritarian adversaries