In Turkish Courts, Freedom of Expression Is Still Worth Fighting For | Freedom House
Skip to main content

Home » News » Blog » In Turkish Courts, Freedom of Expression Is Still Worth Fighting For

In Turkish Courts, Freedom of Expression Is Still Worth Fighting For 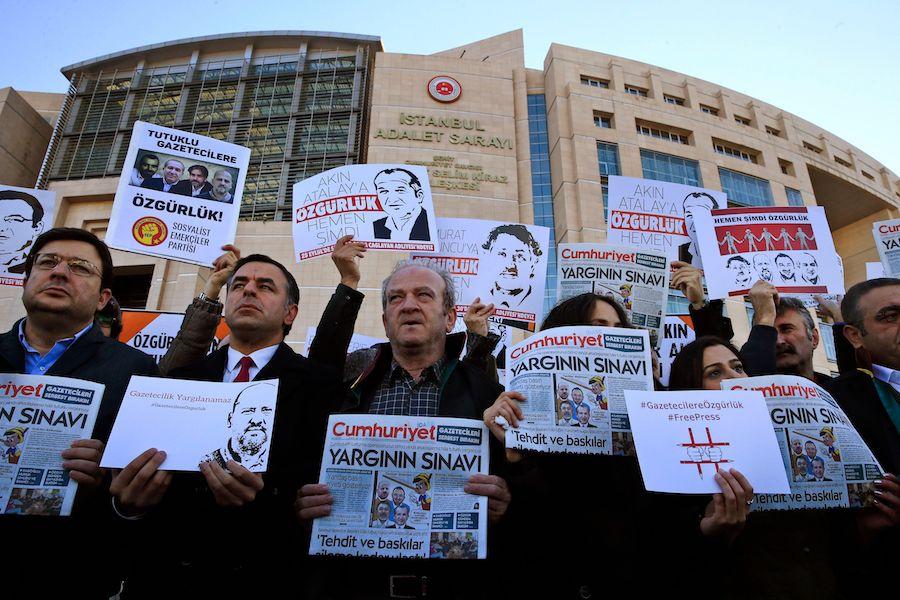 Demonstrators hold copies of the Cumhuriyet daily outside an Istanbul court where a dozen of the newspaper's employees stand trial on charges of aiding terror groups. (Photo credit: AP via Shutterstock)

Positive rulings are not always enforced, but they help preserve crucial legal standards regarding fundamental rights.

The judicial system in Turkey today is in conflict with itself over how and whether to uphold basic rights and freedoms, including freedom of expression. The centralization of political and constitutional authority in the last seven years has made the courts wary of issuing decisions that could offend the president, but there is still enough independence in the country’s once-proud judiciary to give defendants some hope of victory. These conditions make litigating freedom of expression cases frustrating, but not pointless—human rights advocates can still win individual cases and help create the grounds for better protection of civil liberties in the future.

Escalating political pressure on the courts

The Turkish judiciary has never been free of political interference, and the rights of journalists and others to express themselves were subject to some constraints throughout the country’s modern history. Those who criticized the state, especially regarding its treatment of ethnic minorities, risked various official punishments depending on shifting taboos. Neither elected governments nor the successive military juntas that overthrew them were shy about prosecuting their critics. In the 2000s, as the Justice and Development Party (AKP) of Recep Tayyip Erdoğan led a limited liberalization process that broke down old prohibitions on discussion of ethnic issues, there was a simultaneous attack on the speech of secularists and defenders of the previous regime. In particular, the Ergenekon and Balyoz trials, which were engineered by a coalition of Gülenist prosecutors and the AKP in order to break the political autonomy of the military, swept up journalists and other civilians along the way.

This type of politicized prosecution was turned against the Gülenists themselves after a split between Islamic preacher Fethullah Gülen’s Hizmet movement and Erdoğan over what became known as the December 17–25 corruption investigations in late 2013. In March 2014, then prime minister Erdoğan pushed through legislation that weakened the independence of the body responsible for appointments of judges and prosecutors. Over the next two years, Erdoğan smothered the corruption investigations, which had threatened the AKP leadership, and began dismissing and arresting judicial personnel with whom his party had previously worked closely. Ironically, the Ergenekon and Balyoz convictions were then overturned as well, and some of their most prominent targets rehabilitated.

The coup attempt of July 15, 2016, allowed Erdoğan to dramatically escalate the purge—in an interview afterwards, he famously called it “a gift from god.” Over 4,000 judges and prosecutors were dismissed. Lawyers spoke of trying cases before judges who were fresh out of law school. Indictments, even in high-profile cases, deteriorated into a mishmash of allegations, conspiracy theories, and secret witnesses. Political influence over the judiciary reached new heights.

More changes followed the constitutional revisions that went into effect in June 2018. They created a superpresidential system, with Erdoğan at the helm. He is now able to appoint six of the 13 members on the Council of Judges and Prosecutors (HSK); the parliament, which his party dominates, appoints the rest. Erdoğan has appointed five members of the Constitutional Court so far, and he will have the opportunity to make four more appointments in his first term under the new constitution.

The postcoup purges, combined with the authorities’ continued pressure on left-wing and Kurdish movements in the country, contributed to a total of 113 journalists and media workers in jail in Turkey at the end of 2019.

Despite this grim pattern of political interference and degradation of the rule of law, the picture is complicated by surprising signs of judicial independence on freedom of expression issues, even if positive rulings in the higher courts are not always matched by implementation or indeed acknowledgment among the lower courts and executive officials.

In several cases in the last two years, the Constitutional Court has come to the defense of individuals facing persecution by state authorities. It found in January 2018 that the lengthy pretrial detentions of journalists Mehmet Altan and Şahin Alpay had violated their rights to free expression. In a tied decision in July 2019, the court ruled that hundreds of academics who signed a petition against the resumption of conflict with the Kurdistan Workers’ Party (PKK) in January 2016 were exercising their freedom of expression. (In cases of a tie in the Constitutional Court, the deciding vote goes to the chairperson.) In December 2019, the court decided that Wikipedia, which had been unavailable in Turkey for two years, should be unblocked. And earlier this month, the Constitutional Court overturned a libel conviction against a journalist who sparred wıth former Ankara mayor Melih Gökçek on Twitter, finding that the mayor had to tolerate higher levels of criticism due to his official position. Gökçek was infamous during his mayoralty for filing thousands of lawsuits against individual social media users.

Implementation of these judgments has been uneven. The Academics for Peace ruling is being applied narrowly and inconsistently. As required, some academics are being acquitted of criminal charges connected to the petition. But others still have cases ongoing, and those who were purged from universities during the postcoup state of emergency are not being reinstated. In practice they have been harshly punished despite the Constitutional Court declaring that their speech was protected.

The ruling for the release of Mehmet Altan and Şahin Alpay was met with outright rejection by lower courts, which said they did not have to follow the Constitutional Court’s rulings. Alpay was only released in March 2018 after the Constitutional Court issued another ruling in his favor. He was later convicted of “membership in a terrorist group” but has not been rearrested due to judicial control measures. Altan remained in prison until June 2018, despite winning a European Court of Human Rights (ECtHR) ruling in March of that year. He was eventually acquitted of all charges in November 2019.

The outcome was worse for Mehmet Altan’s brother Ahmet, also a journalist. Held in pretrial detention since September 2016, he was first convicted of “attempting to overthrow the constitutional order” in February 2018. His case was overturned on appeal, however, and he was retried on a lesser charge of “being a member of an armed terrorist organization.” In November 2019 he was convicted on that charge, but released under judicial control given the more than three years he had already spent in prison. The prosecutor again sought his arrest despite the court’s orders, and eight days after his release, he was seized in a dawn raid on his house. He remains in prison to date.

Even the Constitutional Court’s clear ruling in December to unblock Wikipedia was slow-rolled by the Information and Technology Communications Authority (BTK), which said it needed to see the full reasoned ruling from the court; such explanatory documents are often released weeks after the decision itself. There was no legal basis for the BTK’s excuse, since the court’s ruling was already binding when it was announced. Wikipedia was only unblocked on January 15, when the ruling was published in Turkey’s official gazette.

Unsurprisingly, these arbitrary responses to politically inconvenient court rulings extend to the international domain. Twice in the last year, the ECtHR, whose judgments are binding on Turkey, has made the unusual finding of violations of Article 18 of the European Convention on Human Rights, which pertains to imprisonment on political grounds. In the case of opposition politician Selahattin Demirtaş, the ruling centered on his lengthy pretrial detention. But because he was immediately convicted in a separate case, Turkey dismissed the court’s findings as not applicable. In the case of jailed civic activist Osman Kavala, however, no conviction had taken place, and therefore the ECtHR’s ruling should have had immediate effect, resulting in his release. Nevertheless, in a hearing on December 24, following the ECtHR’s ruling, the lower court ignored the ECtHR’s authority, stating that it would await a decision from the Ministry of Justice on how to proceed. Essentially, the court said it needed approval from a political authority before implementing a legally binding decision.

The Kavala case exemplifies where things stand in Turkey after seven years of political and constitutional transformation. There continue to be judgments that uphold freedom of expression based on international best practices, especially at the highest levels of the court system. The Constitutional Court has made several such rulings even after the 2016 coup attempt and the installation of the superpresidential system, and the ECtHR is able to provide additional oversight in terms of the application of human rights law. But lower courts appear to be fearful of enforcing rulings that may upset political authorities, and seek political guidance, either formally or informally.

That said, contesting cases in the courts, domestically and internationally, continues to offer a chance of success. It helps preserve a space for critical and independent discourse, and it reinforces important standards for how freedom of expression should be protected in a democratic society. The challenge for Turkish citizens and their international partners is translating these individual successes into long-term changes that will benefit Turkey as a whole.

This article was first published by Ahval on January 16, 2020.