A War Worth Winning | Freedom House
Skip to main content

A War Worth Winning

In October, President Obama announced that he would be involving U.S. forces in yet another conflict on African soil. Just a month and a half after the fall of Tripoli, the president stated that 100 combat-equipped military advisers would be deployed to Central Africa to provide “information, advice, and assistance to select partner nation forces.” The ultimate goal of the mission is the “removal from the battlefield” of Ugandan rebel Joseph Kony and other senior leaders of the Lord’s Resistance Army (LRA).

This initiative was immediately criticized by members of Congress on both sides of the aisle, who challenged the president’s assertion that defeating the LRA is in the national security and foreign policy interests of the United States. Opponents of the deployment argued that the president was sending U.S. troops into another costly and dangerous conflict, which in this case has been ongoing for more than 20 years. As one Democratic congressman put it, “What is the strategic interest of the United States in doing this? I mean, there are lots of unpleasant people in the world…. The United States obviously cannot try to dethrone every one of them.”

In many ways the congressman is right. Finding, capturing, or killing Joseph Kony and other senior leaders of the LRA is not explicitly in the United States’ national interest, narrowly defined. A case might be made that a more stable Central Africa would allow for the easier and more transparent extraction of valuable minerals and other resources, potentially enriching local populations as well as the global economy. One could also argue that the LRA’s presence exacerbates the problems of a region where genocide and civil war—in Darfur, South Sudan, Rwanda, and the Democratic Republic of Congo (DRC)—have consistently drawn the attention of U.S. officials and American civil society, largely for humanitarian reasons. 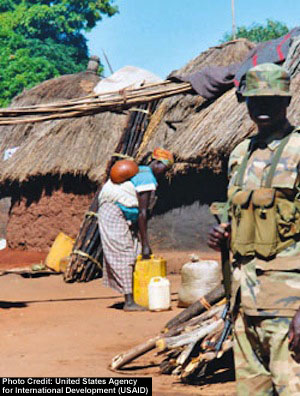 The expansion of democracy is another consideration. None of the countries plagued by the LRA are considered electoral democracies in Freedom in the World, Freedom House’s annual assessment of political rights and civil liberties. Illegal armed groups both flourish in and perpetuate the absence of effective governance, and their removal is a prerequisite for democratic development.

The best justification for sending U.S. troops to the region, however, may lie in the congressman’s argument. While it is true that there are a lot of unpleasant people in the world, one would be hard pressed to find any who are more unpleasant than Joseph Kony and can be “dethroned” as easily. Sending military advisers to Central Africa is a small price to pay for ending the career of one of the most horrific mass murderers of the past 20 years.

Although total figures are hard to calculate, most estimates put the number of people killed by the LRA in the tens of thousands, the number abducted between 30,000 and 70,000, and the number displaced by the conflict at more than 2 million. This carnage has long been divorced from any coherent ethnic or ideological aim, with the small leadership centered on Kony regularly enlisting child soldiers to maintain the group’s fighting strength, frequently crossing national borders in remote areas, and attacking civilians rather than taking on government forces.

It should not come as surprise that President Obama is finally paying attention to the issue and the region. He is, in fact, legally obligated to do so. In early 2010, the LRA Disarmament and Northern Uganda Recovery Act passed unanimously in both the Senate and the House of Representatives. The measure had more cosponsors, 267, than any other legislation on Africa in the past 30 years. The law required the president to develop and present a strategy to deal with the LRA and enhance prospects for peace in the region. However, Obama has made modest but insufficient efforts to implement the strategy since it was presented to Congress in November 2010. Indeed the Enough Project repeatedly gave the president dismal grades in its assessment of the administration’s efforts. To many advocates, the deployment of advisers is the first sign in recent years that United States is taking the conflict seriously.

The mission of the small U.S. contingent is principally to provide logistical and technical support. But the American presence also adds legitimacy and urgency to the fight against the LRA. Past operations have failed in part because the governments of Central Africa distrust one another, in some cases with good reason. In 2008, however, the relevant countries finally agreed to a joint campaign—Operation Lightning Thunder—with American participation. Moreover, commitment to eliminating the LRA has been waning among regional countries. The DRC and South Sudan are occupied with their own conflicts, and Uganda is sending its best troops to Somalia to participate in the African Union’s campaign against Al-Shabaab. Without U.S. involvement, there is very little chance that efforts to finish off the LRA would continue in any significant or sustained manner, potentially allowing the group to recover from past losses.

There are now signs of hope in the struggle against the LRA. Recent estimates put the total number of commanders and core fighters at 200 to 400 people, less than half the number in 2008. And although the LRA may not disappear with the arrest or death of Joseph Kony, experts agree that the cult-like group would begin to dissolve without its leader. Still, this will only be half the battle. Once the threat of the LRA is eliminated, the United States and its allies, along with partner nations in Central Africa, will need to focus resources and attention on healing the wounds that the group has inflicted over the past 20 years. Most importantly, they must work to establish stable, effective, democratic governance across the region—the only sure vaccine against the reemergence of rapacious guerrilla armies like the LRA.