Worst idea of the year: Selling out on Taiwan | Freedom House
Skip to main content

Home » News » Blog » Worst idea of the year: Selling out on Taiwan

Worst idea of the year: Selling out on Taiwan

In a recent New York Times opinion piece entitled “To Save Our Economy, Ditch Taiwan,” Paul V. Kane advanced a scheme that he claimed would, among other things, fix the American economy and lead to a new and mutually beneficial relationship with China. The United States, he proposed, should jettison its support for Taiwan—firmly, absolutely, and forever.

In exchange, China would write off the over $1 trillion in U.S. debt it currently holds, which amounts to some 10 percent of the total national debt. Beyond that, Kane asserts that “this savvy negotiating posture” could also convince China “to end its political and economic support for pariah states like Iran, North Korea, and Syria.” Such a deal would extricate U.S. foreign policy from outdated Cold War templates, he contends, and enable doves within the Chinese Communist Party (CCP) leadership to gain the upper hand over the hawks by removing the sensitive Taiwan issue from the table.

Ordinarily, proposals to push a longtime friend and ally under the bus would hardly merit a response. Yet Kane’s piece appeared in the Times, and it has already been widely quoted and cited in blogs, tweets, and other media. More to the point, there is always the suspicion that the appalling pact he advocates could reflect the views of many foreign policy thinkers in the United States and Europe.

The primary issue Kane’s analysis ignores is the nature of the regimes that govern the two countries in question: China’s authoritarian, one-party state and Taiwan’s vibrant democracy. And we are, in fact, speaking of two countries. Beijing’s propaganda to the contrary, Taiwan fulfills all the requirements for self-government and national sovereignty, while earning high marks on various indicators of economic health and human development.

Freedom in Asia (According to Freedom in the World) 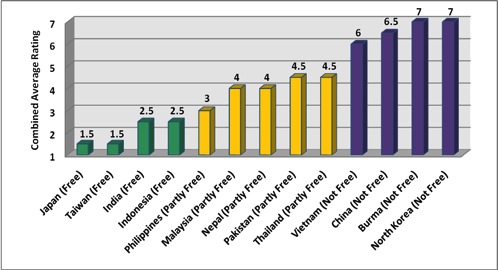 Getting to the heart of the matter, Taiwan has built a system of democratic government that ranks among the most impressive in Asia. Indeed, among East Asian countries, Taiwan stands right alongside Japan and South Korea in Freedom House’s Freedom in the World report, with a political rights rating that rivals those of long-established democracies in Europe. Taiwan holds honest and competitive elections, boasts an independent and outspoken press, respects freedom of religion, encourages a vibrant civil society, and maintains an independent judiciary. Taiwan’s system is not perfect, but it ranks among the top quarter of the world’s countries on the Freedom in the World scale.

Compare these achievements with conditions on the mainland. Yes, China has made great strides since Mao’s demise. It is a freer country in many ways, and certainly far less impoverished. But it is still ruled by one of the most repressive and brutal regimes in the world, placing it among the “Worst of the Worst” according to Freedom House indicators. And in recent years especially, it has actually been moving backward. Even as China’s leaders have become increasingly assertive globally, they have grown more intolerant and severe at home. Many believed that major reforms would be introduced during the run-up to the 2008 Beijing Olympics. In fact, the CCP only tightened its controls. After the games, a series of ceremonial political events, “sensitive” anniversaries, and leadership changes were cited as justifications for the escalating crackdown on dissent, and the process accelerated as the Arab Spring unsettled the leadership in early 2011.

Each month or so brings news of yet more restrictions on the internet and social media in China. Meanwhile, even modest legal reforms from recent decades are being rolled back, and the use of extralegal detentions and security bodies to suppress peaceful dissent is growing. Tellingly, the authorities threw a tantrum after jailed democracy advocate Liu Xiaobo was awarded the Nobel Peace Prize in 2010. With Aung San Suu Kyi’s release from house arrest in Burma late that year, Liu is now the only Nobel laureate languishing in prison. Yet he and the thousands of other prisoners of conscience in China have been doubly punished—jailed by their own government and forgotten by world leaders who, having succumbed to the kind of thinking reflected in Kane’s piece, are fearful of ruffling China’s feathers.

A second fundamental flaw in Kane’s proposal is the message that the abandonment of Taiwan’s 23 million people would send to even smaller democracies around the world. What would Israel or the Baltic countries think of the United States after it had tossed a vulnerable ally into the maw of a large authoritarian neighbor? Major allies would also take notice, and their reactions could be both costly and unpleasant for the United States. It is worth mentioning that Japan is close behind China as the second-largest foreign holder of U.S. debt. Taiwan itself is high on the list. 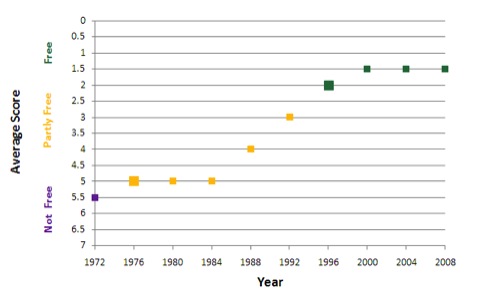 Kane assumes Taiwan’s “inevitable” absorption into China. This is hardly certain, and the terms of any merger are even less clear. But there are already signs that the CCP is attempting to undermine democracy in Taiwan, and this effort would no doubt escalate dramatically if Beijing felt that it had a free hand. The Taiwanese people would not surrender their rights easily. Nor should they, given the universally recognized right to self-determination. One suspects that any integration under the circumstances Kane alludes to would be far from orderly.

Meanwhile, rather than silencing hard-line militarists in China, there is every reason to believe that a U.S. capitulation on Taiwan would only embolden such leaders to press their advantage. And there is absolutely no reason to believe that Beijing, having paid off the United States and finding itself in a position of unprecedented strength, wou ld suddenly become more cooperative in other areas of its foreign policy.

Finally, while decrying America’s supposed attachment to Cold War approaches, Kane himself indulges in the kind of bloodless, ultrarealist thinking that led to dubious and at times shameful U.S. actions during parts of the Cold War. What he seems not to understand is that America’s power derives not just from its economy and credit rating, but from its network of alliances and its reputation as a defender of democracy, both of which would rapidly crumble if this unconscionable proposal were put into effect. Abandoning democratic Taiwan to cut a mercenary deal with authoritarian China would undermine the basic values that Americans hold dear, as well as America’s credibility in supporting democratic reform in places like the crucial Arab Spring countries. In short, in exchange for a one-time dose of debt forgiveness, the United States would be trading away the priceless results of over two centuries of diplomatic toil and military sacrifice.