On behalf of the International Steering Committee of the Community of Democracies, Freedom House awarded the Mark Palmer Prize to two outstanding diplomats who exemplify the late Freedom House Vice Chairman's life-long commitment to promoting democratic freedoms and contesting authoritarian rule. Dr. Sushma Palmer, wife of the late Ambassador Palmer, presented the prizes to Deborah Lyons, Canada’s former ambassador to Afghanistan, for her courageous work on empowering women and promoting gender equality in that conflict-torn society, and to Organization of American States Secretary General Luis Almagro for his steadfast leadership in holding authoritarian governments to account and supporting beleaguered civil society activists across the region. The ceremony took place at a session of the Community of Democracies Governing Council on the margins of the United Nations General Assembly. The prize, given annually since 2011, celebrates the achievements of diplomats and international public servants in advancing democracy and human rights. 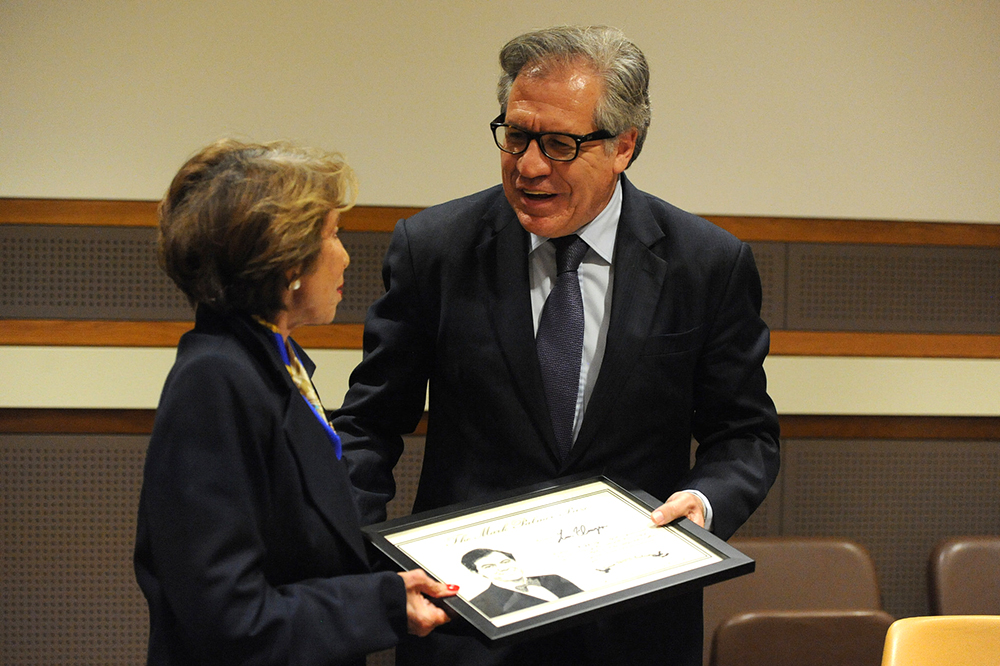 A longtime Uruguayan diplomat and his country’s former Foreign Minister, Luis Almagro is currently serving as Secretary General of the Organization of American States (OAS).

Secretary Almagro’s career is characterized by his unrelenting commitment to activism in defense of human rights and democratic freedoms. During his tenure as Uruguay’s top diplomat, his term was defined by his work on several emblematic initiatives that raised the global profile of this small South American country. They included receiving former prisoners from Guantanamo and welcoming dozens of Syrian families who had been victims of that country’s horrific conflict.

Secretary Almagro was an active participant in the consolidation of the Union of South American Nations (UNASUR) and the Community of Latin American and Caribbean States. He has proven himself a forceful advocate for peaceful democratic change across the region, typified by his role as a member of the special UNASUR delegation to Venezuela in 2014 when he championed dialogue between the Maduro government and opposition groups with the goal of halting escalating violence.

Since assuming the post of OAS Secretary General in 2015, Luis Almagro has demonstrated a steadfast commitment to the protection and expansion of human rights and fundamental freedoms throughout the Americas. His bold condemnation of repressive measures by the Venezuelan government have sparked dialogue both within the OAS and amongst neighboring South American states, moving the erosion of citizens’ rights and democratic institutions squarely on the international agenda. His call to invoke the Inter-American Democratic Charter underscored his deep conviction that leaders who fail to abide by its provisions must be held to account.

Secretary Almagro has an unwavering belief in the importance of building inclusive, participatory democracies as the foundation for genuine political stability and broad-based socio-economic development. It is with great pleasure that we award Luis Almagro the Mark Palmer Prize in recognition of his outstanding work and tireless efforts to support civil society and democratic values throughout the Americas. 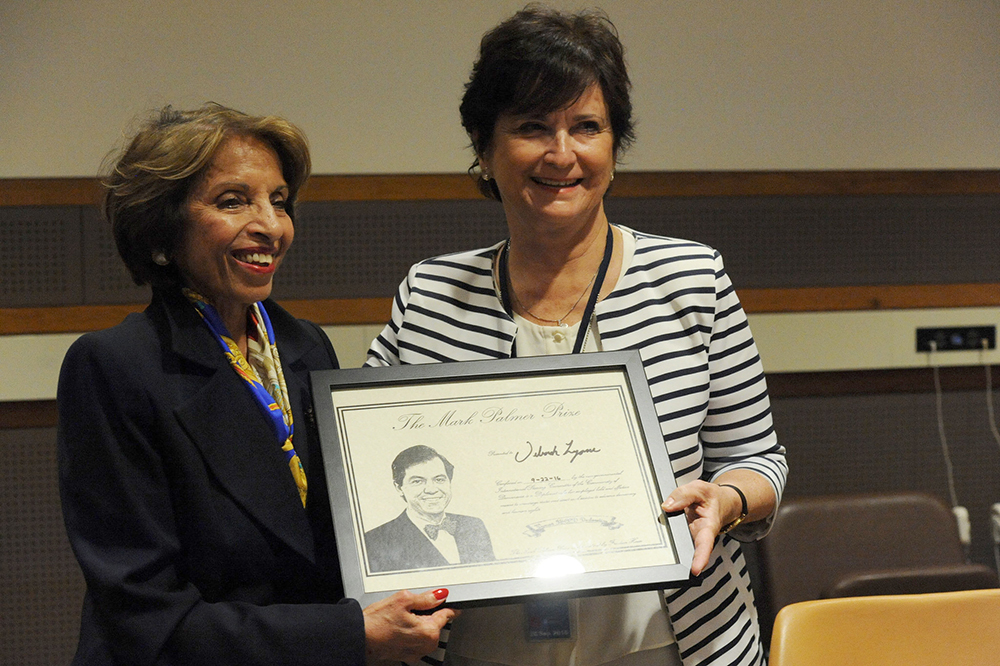 Deborah Lyons drew on her wealth of experience gained in more than three decades as a distinguished civil servant to tackle the demanding job as Canada’s ambassador to the Islamic Republic of Afghanistan. As Ambassador-designate to Israel, Ms. Lyons will soon face an exciting opportunity and daunting challenge to continue her work as a powerful advocate for women’s rights and democracy.

Throughout her posting in Kabul, Ambassador Lyons consistently demonstrated tremendous valor under difficult and often dangerous circumstances in order to assist civil society and advance democratic rule, notably with respect to the women of Afghanistan. She skillfully pushed women’s empowerment and gender equality to the forefront of strategic priorities, recognizing that a peaceful and prosperous Afghanistan could well depend on elevating the status of girls and women. She was instrumental in promoting maternal, newborn and child health, and in the fight against the common practice of child, early and forced marriage.

In a country that offers few opportunities for women to discuss policy concerns, Ambassador Lyons challenged the status quo, providing opportunities and guidance for Afghan women to develop and present to the Afghan government consensus-based, practical policy recommendations.

In addition to her outstanding contributions to boosting the ranks of Afghan women serving in government and as a tireless advocate for women’s rights, Ambassador Lyons has worked closely with diplomatic representatives at the United Nations, NATO, and other multilateral institutions on Afghan electoral reform. Her work involved extensive engagement with the Afghan government to strengthen the capacity of the Independent Elections Commission to organize credible elections in 2014. Ambassador Lyons’ work on electoral reform also led her to partner with and support both fledgling independent local media and civil society organizations that were active in monitoring the election process.

Ambassador Lyons’ innovative and determined efforts have had a direct, and in many cases, life-changing impact on so many Afghan women. On behalf of the selection committee, I am thrilled to present Ambassador Deborah Lyons with the Mark Palmer Prize in recognition of her inspiring work to advance human rights and democracy in Afghanistan.