In this issue: How technology companies should prepare to defend Hong Konger’s digital rights ahead of December’s legislative elections, state media responds to Taliban takeover of Afghanistan, and US firms censoring content about China outside of China.

On July 27, police briefly detained Caixin photographer Chen Liang, who used a drone to take this image of makeshift memorials to victims of the devasting floods in Henan that killed over 300 people. Mourners placed flowers and notes outside the entrance to the Shakou Road Station of the Zhengzhou Metro after 14 passengers died in a flooded subway car on July 22. Authorities erected barriers to block the memorials, and detained and roughed up journalists, before eventually removing some of the barriers. (Image Credit: Chen Liang)

Analysis: Ahead of Hong Kong Elections, Companies Must Act to Protect Digital Rights

The private sector may be forced to choose between enabling and resisting state repression.

by Angeli Datt and Isabel Linzer

Hong Kong police arrested two men in July for posts on a Facebook group that called for a boycott against a pro-Beijing television channel and its advertisers. Separately, Hong Kong police ordered the website of an exiled activist group to be taken offline globally, albeit briefly, then blocked it in the territory in June because it advocated for democracy. And Hong Kongers could face up to five years in prison for “desecrating” the Chinese national flag or emblem on the internet under new legislation that was introduced in August and will soon become law.

These are just a few examples from the past three months that illustrate how steeply internet freedom in Hong Kong has declined in the year since Beijing imposed the National Security Law (NSL) on the territory. Numerous laws have been invoked as part of the recent crackdown, but the draconian NSL—a direct response to the 2019 prodemocracy protest movement—marked a turning point in the broader shift toward tighter control over digital space in Hong Kong.

Now, another moment of reckoning is on the horizon. On December 19, the government will hold long-delayed Legislative Council elections—the first major balloting to be conducted under the NSL and since Beijing ordered drastic changes to the electoral system. Under the new system, all candidates must undergo a screening process run by national security police and a government-appointed body, and the share of directly elected seats has been reduced from half of the Legislative Council to less than a quarter. The prodemocracy opposition camp has also been devastated by a series of expulsions and prosecutions, and many potential candidates have been jailed or fled into exile. Meanwhile, Hong Kong’s previously vibrant civil society and media sectors have faced similarly ruthless repression over the past year, and self-censorship has increased online as users delete social media posts that could be deemed illegal.

If this overhaul of political and civic space in Hong Kong is any indication of what is to come, the December elections will likely be a catalyst for fresh eruptions of dissent and even more restrictions on human rights in the territory.

Much of the coming contestation will play out online, and Freedom House has identified four key forms of digital interference to watch for ahead of election day. While many are common in the closed environment of mainland China, they were unknown in Hong Kong until recently. The question is whether leading private companies will help stave off this new wave of repression by defending what remains of Hong Kong’s traditionally free and open internet.

First, there is a high risk of arrests for online activity such as critical discussions about the elections or sharing of civil disobedience strategies. Arrests for online activity are a relatively new development in Hong Kong; internet users in mainland China have long had to contend with more severe legal repercussions for their online speech. But Hong Kongers have faced an alarming rise in arrests and prosecutions for online speech under a colonial-era sedition law and the NSL, with potential life sentences in some cases. A new electoral law criminalizes inciting someone to spoil their ballot or leave it blank, and the government is planning legislation that penalizes “fake news,” all of which may lead to further arrests and prison sentences for online expression.

Second, government critics may be the targets of cyberattacks. Such campaigns have intensified since 2019, and two significant attacks that were linked to the Chinese state struck the platforms Telegram and LIHKG, which were used by protesters. Leading up to the December elections, cyberattacks against candidates, democracy supporters, journalists, digital media sites, and civil society organizations could disrupt campaigning, the exchange of independent information about the elections, and the mobilization of protests.

Third, news outlets, civil society websites, and social media platforms are at risk of being blocked for hosting content that calls for protests, supports opposition candidates, raises private funds, or criticizes the electoral process and the Hong Kong and Chinese governments. Empowered by the NSL, Hong Kong police have increasingly ordered internet service providers to block websites, with six sites temporarily or permanently blocked since January 2021. While mainland users behind the Great Firewall are restricted from viewing thousands of websites without a virtual private network (VPN), any trend toward broader website blocking in Hong Kong would amount to a serious decline in internet freedom.

Fourth, the elections may trigger pressure on individuals, media organizations, and technology companies to remove online content. In June, police arrested senior Apple Daily staff on NSL-related charges. As a result, the paper closed and deleted all of its online content, and the digital outlet Stand News removed all of its online opinion articles out of fear of a similar prosecution. The public broadcaster Radio Television Hong Kong (RTHK) deleted all of its English-language Twitter posts and all programming older than one year from YouTube and Facebook this summer. In July, the government introduced amendments to the Personal Data (Privacy) Ordinance that would permit the privacy commissioner to order the removal of online content and the arrest of employees from overseas technology companies if the firms fail to comply with takedown requests. The draft bill has encountered pushback from an industry body but is expected to be voted into law before election day.

The need for a private-sector response to the crackdown

The speed and scale of the crackdown in Hong Kong has been breathtaking and demands a coordinated response from the democratic world. Governments should speak out against arrests and repressive legislation in Hong Kong and China, and back up their statements with multilateral sanctions against rights abusers and tangible support for civil society, independent media, and exile communities.

But private companies—especially technology companies—also have a crucial part to play. They should resist state demands that violate users’ rights, including by rebuffing requests for user data and to remove, block, or otherwise censor content that is protected under international human rights standards. Full transparency around government requests, whether or not companies comply, would lay bare the state’s repressive actions and pave the way for accountability.

Technology companies should divert internal resources in preparation for the potential onslaught of digital election interference. Social media platforms should roll out security features to protect users from state-sponsored hackers and increase staff capacity to rapidly respond to incidents, including account takeovers and reports of disinformation or harassment. VPN providers can bolster resources to evade blocks on websites. Website hosting providers can expand distributed denial-of-service (DDoS) mitigation services for independent media and civil society groups facing state-sponsored cyberattacks. Companies should also help protect the privacy and safety of users—and improve their own preparedness—by proactively engaging with and providing support to civil society groups that work on digital rights and security.

Companies in all sectors may face repercussions from Beijing for supporting digital rights or enforcing sanctions against Chinese individuals or entities, particularly following the June passage of a Chinese law meant to counter foreign sanctions. But they can no longer sit on the sidelines. The business community has a fundamental interest in protecting the sorts of freedoms that have long made Hong Kong a dynamic and reliable source of profits and opportunities. International businesses that are active in Hong Kong should conduct transparent due diligence on their operations to avoid complicity in human rights violations. The private sector should also use more of its leverage with the Chinese and Hong Kong governments to impede any legislation or other measures that infringe on free expression. Indeed, previous examples in mainland China indicate that such lobbying could be even more effective at yielding concessions than pressure from foreign governments.

These elections will not be the first or the last to feature online interference by antidemocratic regimes. In Hong Kong, however, private companies can make a difference, and technology companies have an especially important opportunity to show the world that they have learned from past mistakes and are committed to defending the human rights of all users.

Since late June, several nonstate actors have pushed back against CCP efforts to encourage self-censorship and censor outright content it dislikes. On June 30, the former editor in chief of the science journal Annals of Human Genetics said his 2020 resignation came in protest of the journal’s refusal to publish an article calling on academic publications to consider a boycott of China over the government’s rights abuses against Uyghurs. The journal’s publisher, Wiley, reportedly worried the article would cause trouble for its office in China. Another Wiley publication, Molecular Genetics and Genomic Medicine, saw 8 out of 25 board members resign this summer in protest of the journal’s slow response to demands it remove ethically questionable papers involving studies of minority groups in China.

On July 28, 111 Nobel laureates published a letter denouncing the Chinese government’s attempts to compel the US National Academy of Sciences and Nobel Foundation to disinvite two speakers—the Dalai Lama and a Taiwanese chemist—from the April Nobel Prize Summit. The organizers rebuffed the Chinese embassy’s demands and went ahead with the virtual event, which was hit by two cyberattacks that disrupted proceedings.

In Sweden, civil society organizations issued a letter on August 19 condemning the Chinese embassy in Stockholm’s recent verbal attacks against Swedish journalist and publisher Kurdo Baksi. The letter also reiterated support for kidnapped Swedish publisher Gui Minhai, for whom Baksi has organized demonstrations in support of in front of the embassy. 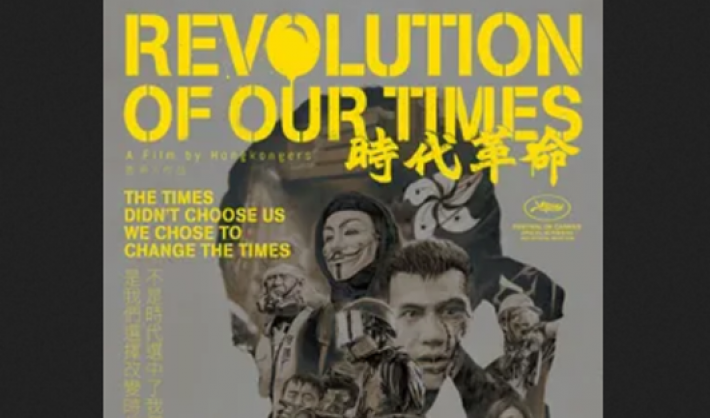 The poster for the Hong Kong documentary about the 2019 protests. (Credit: Cannes Festival)

In July, the Cannes Film Festival screened the Hong Kong documentary “Revolution of our Times,” which explores the lives of seven participants in the 2019 prodemocracy protests. The festival’s director said they were “proud to present this film.”

These examples reflect growing awareness and more active responses from nongovernmental actors to CCP global media influence. A February 2021 paper from the National Endowment for Democracy included dozens of such examples from around the world.