Freedom on the Net Methodology

Freedom on the Net provides analytical reports and numerical scores for 65 countries worldwide. Assigning scores allows for comparative analysis among the countries surveyed and facilitates an examination of trends over time. The accompanying country reports provide narrative detail to support the scores.

The countries were chosen to provide a representative sample with regards to geographical diversity and economic development, as well as varying levels of political and media freedom. The numerical ratings and reports included in this study particularly focus on developments that took place between June 1, 2017 to May 31, 2018, although the analysis in the Key Internet Controls graph and the Topics Censored table covers developments through the end of September, when this year’s edition was sent to press.

Freedom on the Net is a collaborative effort between a small team of Freedom House staff and an extensive network of local researchers and advisors in 65 countries. Our in-country researchers have diverse backgrounds—academia, blogging, traditional journalism, and tech— and track developments from their country of expertise. In the most repressive environments, Freedom House takes care to ensure researchers’ anonymity or, in exceptional cases, works with individuals living outside their home country. 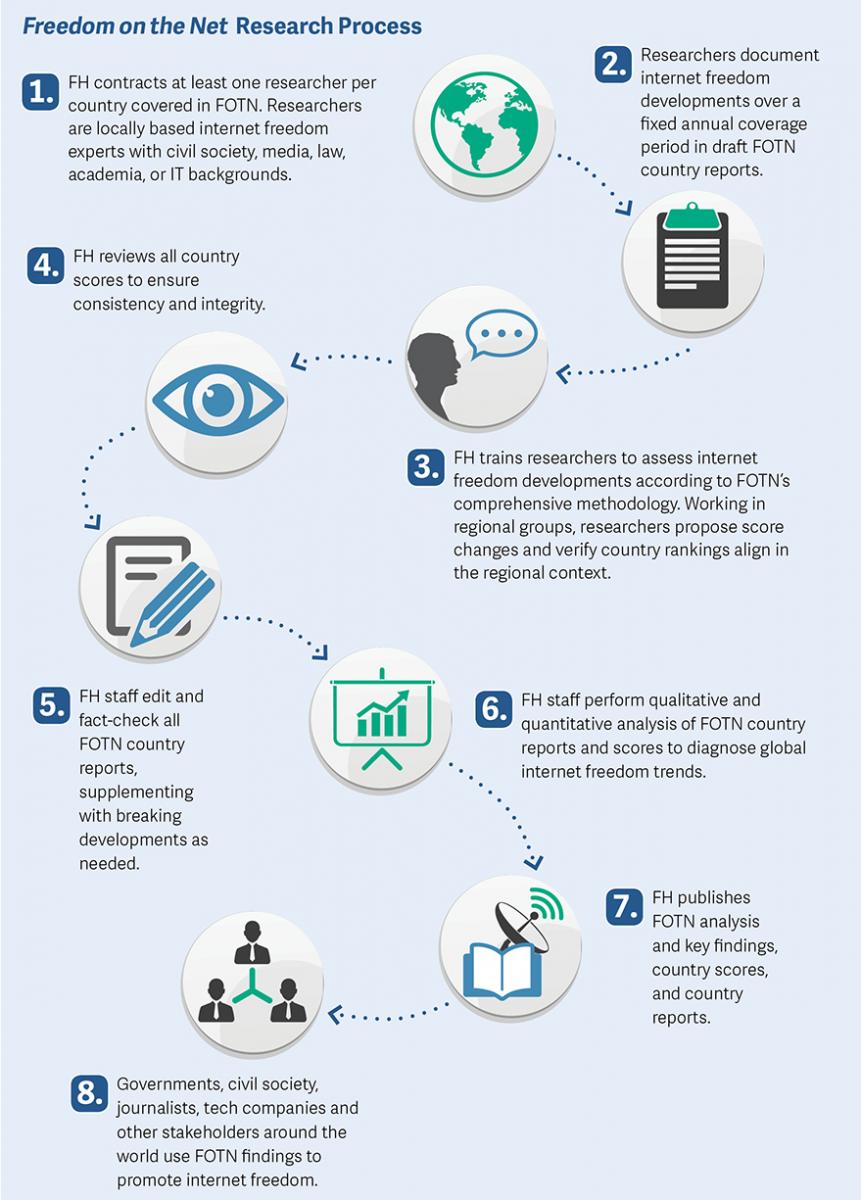 The Freedom on the Net index measures each country’s level of internet and digital media freedom based on a set of methodology questions developed in consultation with international experts to capture the vast array of relevant issues that enable internet freedom (see “Checklist of Questions”). Given increasing technological convergence, the index also measures access and openness of other digital means of transmitting information, particularly mobile phones and text messaging services.

Freedom House does not maintain a culture-bound view of freedom. The project methodology is grounded in basic standards of free expression, derived in large measure from Article 19 of the Universal Declaration of Human Rights:

“Everyone has the right to freedom of opinion and expression; this right includes freedom to hold opinions without interference and to seek, receive, and impart information and ideas through any media regardless of frontiers.”

This standard applies to all countries and territories, irrespective of geographical location, ethnic or religious composition, or level of economic development.

The project particularly focuses on the transmission and exchange of news and other politically relevant communications, as well as the protection of users’ rights to privacy and freedom from both legal and extralegal repercussions arising from their online activities. At the same time, the index acknowledges that in some instances freedom of expression and access to information may be legitimately restricted. The standard for such restrictions applied in this index is that they be implemented only in narrowly defined circumstances and in line with international human rights standards, the rule of law, and the principles of necessity and proportionality. As much as possible, censorship and surveillance policies and procedures should be transparent and include avenues for appeal available to those affected.

The index does not rate governments or government performance per se, but rather the real-world rights and freedoms enjoyed by individuals within each country. While digital media freedom may be primarily affected by state actions, pressures and attacks by nonstate actors, including the criminal underworld, are also considered. Thus, the index ratings generally reflect the interplay of a variety of actors, both governmental and nongovernmental, including private corporations.

Each question is scored on a varying range of points. The subquestions guide researchers regarding factors they should consider while evaluating and assigning points, though not all apply to every country. Under each question, a lower number of points is allotted for a more free situation, while a higher number of points is allotted for a less free environment. Points add up to produce a score for each of the subcategories, and a country’s total points for all three represent its final score (0-100). Based on the score, Freedom House assigns the following internet freedom ratings:

After researchers submitted their draft scores in 2016, Freedom House convened five regional review meetings and numerous international conference calls, attended by Freedom House staff and over 70 local experts, scholars, and civil society representatives from the countries under study. During the meetings, participants reviewed, critiqued, and adjusted the draft scores—based on set coding guidelines—through careful consideration of events, laws, and practices relevant to each item. After completing the regional and country consultations, Freedom House staff did a final review of all scores to ensure their comparative reliability and integrity.

In the Key Internet Controls Table, Freedom House staff documented the prevalence of different censorship methods by marking incidents of their occurrence in each country. Incidents are based on Freedom on the Net research and verified by in-country researchers. Inclusion in the table indicates the internet control occurred at least once since June 1, 2016.

1. To what extent do infrastructural limitations restrict access to the internet and other ICTs? (0-6 points)

2. Is access to the internet and other ICTs prohibitively expensive or beyond the reach of certain segments of the population? (0-3 points)

3. Does the government impose restrictions on ICT connectivity and access to particular social media and communication apps permanently or during specific events? (0-6 points)

4. Are there legal, regulatory, or economic obstacles that prevent the existence of diverse business entities providing access to digital technologies? (0-6 points)

Note:  Each of the following access providers are scored separately:

5.To what extent do national regulatory bodies overseeing digital technology operate in a free, fair, and independent manner? (0-4 points)

1. To what extent does the state or other actors block or filter internet and other ICT content, particularly on political and social issues? (0-6 points)

2. To what extent does the state employ legal, administrative, or other means to force deletion of particular content, including requiring private access providers to do so? (0-4 points)

3. To what extent are restrictions on internet and ICT content transparent, proportional to the stated aims, and accompanied by an independent appeals process? (0-4 points)

5. To what extent is the content of online sources of information determined or manipulated by the government or a particular partisan interest? (0-4 points)

7. To what extent are sources of information that are robust and reflect a diversity of viewpoints readily available to citizens, despite government efforts to limit access to certain content? (0-4 points)

8. To what extent have individuals successfully used the internet and other ICTs as sources of information and tools for mobilization, particularly regarding political and social issues? To what extent are such mobilization tools available without government restriction? (0-6 points)

1. To what extent does the constitution or other laws contain provisions designed to protect freedom of expression, including on the internet, and are they enforced? (0-6 points)

2. Are there laws which call for criminal penalties or civil liability for online and ICT activities? (0-4 points)

3. Are individuals detained, prosecuted, or sanctioned by law enforcement agencies for disseminating or accessing information on the internet or via other ICTs, particularly on political and social issues? (0-6 points)

4. Does the government place restrictions on anonymous communication or require user registration? (0-4 points)

5. To what extent is there state surveillance of internet and ICT activities without judicial or other independent oversight, including systematic retention of user traffic data? (0-6 points)

6. To what extent are providers of access to digital technologies required to aid the government in monitoring the communications of their users? (0-6 points)

Note:  Each of the following access providers are scored separately:

7. Are bloggers, other ICT users, websites, or their property subject to extralegal intimidation or physical violence by state authorities or any other actor? (0–5 points)