Read a Country or a Territory Report

Conclusion: The system of choice

Along with the emergence of popular movements for democratic change, the past year brought clear evidence of crisis in major undemocratic states.

For some time now, the momentum of world politics has favored democracy’s adversaries.  While the dramatic gains of the late 20th century have not been reversed, the institutions meant to ensure fair elections, a combative press, checks on state power, and probity in government and commerce are showing wear and tear in the new democracies of Central Europe, Latin America, and Asia. In the Middle East, the potential of the Arab Spring has given way to the chaos and carnage that prevail in Syria, Iraq, Libya, and Yemen, and to a ruthless dictatorship in Egypt. In Africa, the promise of freedom survives, but the dominant trend is one of corruption, internal conflict, terrorism, and ugly campaigns against gay people. Even in the United States, the year’s headlines featured racial strife, a renewed argument over counter-terrorism tactics, and political gridlock.

There are, some say, few compelling advertisements today for the benefits of democratic government, and few signs that the retreat of open political systems can be reversed. However, several major events during 2014 suggest that this gloomy assessment is off the mark.

In Ukraine, hundreds of thousands of people rose up to defy a kleptocratic leadership that offered the country a political and economic dead end. Given the choice between a future course patterned on Russian authoritarianism and a path toward Europe and its democratic standards, a clear majority did not hesitate in choosing the option of freedom, even with its uncertainties. The Kremlin has imposed a terrible punishment for this choice, but so far Ukrainians have not wavered in their defiance.

In Hong Kong, the student-led Umbrella Movement emerged after the Communist leadership in Beijing announced that contrary to previous commitments and public expectations, elections for chief executive would require candidates to be nominated by a pro-Beijing committee, making universal suffrage a hollow exercise. The controversy epitomized both Beijing’s refusal to countenance the basic tenets of democracy and the ultimate weakness of its legitimacy among the public. It also stood as a powerful reminder that while China’s model of state-driven growth combined with strict political control is attractive to elites in authoritarian settings (and to some in democracies as well), ordinary people, and especially the young, find China’s rejection of freedom profoundly unappealing. Notably, the people of Taiwan, through student protests and local election results during the year, strongly voiced their preference for a future in which popular sovereignty prevails.

Along with the emergence of popular movements for democratic change, the past year brought clear signs of crisis for powerful autocracies. 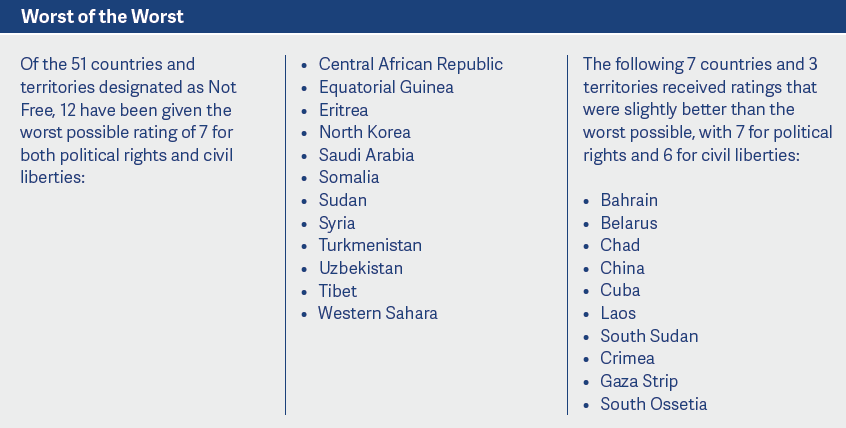 In Venezuela, a toxic mixture of corruption, misrule, and oil-price declines brought shortages, rampant inflation, and enhanced repression. Once touted as a possible template for leftist-populist governments across Latin America, the system set in place by the late Hugo Chávez now stands as a textbook case of  political and economic dysfunction.

Plummeting oil prices also revealed the weaknesses of Vladimir Putin’s dictatorship. But Russia’s problems run deeper than a vulnerability to the energy market. Corruption, cronyism and the absence of the rule of law have discouraged investment and economic diversification. Pervasive propaganda has virtually eliminated critical voices from policy debates. And the absence of checks on presidential power has led to disastrous foreign invasions and a hostile diplomatic course.

These and other examples from the year should remind the world that democracy matters. Antidemocratic practices lead to civil war and humanitarian crisis. They encourage the growth of terrorist movements, whose effects inevitably spread beyond national borders. Corruption and poor governance fuel economic instability, which can also have regional or even global consequences.

Will the world’s established democracies come to recognize that the global assault on free institutions poses a threat to their own national interests? The sanctions placed on Russia by the United States, Europe, and others is a welcome development. They send a message that invading one’s neighbor will have repercussions. The same might be said for the coalition against the Islamic State.

But such firm messages have been lacking when despotic regimes intimidate, jail, or kill their own people. President Sisi is treated as a strong leader and partner in the fight against terrorism despite his enforcement of a level of repression not seen in Egypt in decades. The leaders of democracies compete for China’s favor even as Beijing steps up internal controls and exports its repressive methods to other states. In Latin America, Brazil and other democracies respond to Venezuela’s deterioration with silence. In Asia, major democracies like India and Indonesia have declined to use their influence to encourage a return to civilian rule in Thailand.

In short, democracies often seem determined to wait for authoritarian misrule to blossom into international catastrophe before they take remedial action. This is unfortunate, as even the most powerful repressive regimes have shown they are susceptible to pressures from their own people and from the outside as well. And ordinary citizens have exhibited a willingness to challenge rulers with established histories of bloodletting in the service of political control. Democracies face many problems of their own, but their biggest mistake would be to accept the proposition that they are impotent in the face of strongmen for whom bullying and lies are the fundamental currency of political exchange. This is clearly not the case, even in such difficult times.

Freedom House thanks the following people who were instrumental in the writing of this essay: Elen Aghekyan, Matthew Coogan, Jennifer Dunham, Bret Nelson, Sarah Repucci, Tyler Roylance, and Vanessa Tucker.