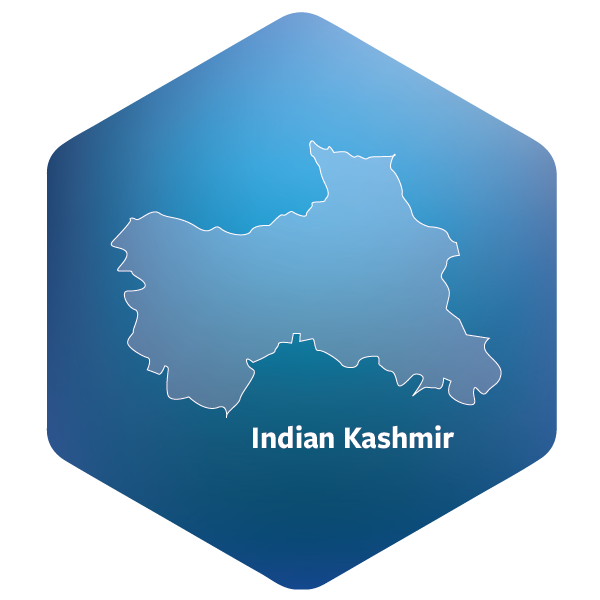 Control of Kashmir has been divided between India and Pakistan since 1948, and Indian-administered Kashmir enjoys substantial autonomy under Article 370 of India’s constitution. However, separatist and jihadist militants continue to wage a protracted insurgency against the government. Competitive elections are held, but they are often marred by violence. Indian security forces are frequently accused of human rights violations, but few are punished. Civil liberties are curtailed during times of unrest.

A1.      Was the current head of government or other chief national authority elected through free and fair elections? 3 / 4

Ordinarily, a chief minister—typically the head of the largest party in the lower house—is entrusted with executive power. The process for selecting the executive is an internal party matter. However, the withdrawal of the Bharatiya Janata Party (BJP) from the governing coalition in June 2018 prompted the resignation of the chief minister, Mehbooba Mufti, and the six-month imposition of rule by State Governor Narinder Nath Vohra. The state governor is appointed by the president of India, under the advice of the central government.

After Governor’s rule expired, the state in December came under President’s rule, placing the central government in charge of state affairs. The transfers took place according to the law. As of the end of the year, it had not been decided whether state assembly elections, slated for 2019, would be called early.

Elections for national parliamentary seats and the state assembly in 2014 were broadly free and fair, with reduced levels of voter intimidation, harassment, and violence compared to past elections. However, in the April 2014 national elections, turnout was less than 40 percent in all districts in the Kashmir Valley due in part to threats of violence. State assembly elections held in November and December 2014 were marked by higher turnout.

Municipal elections were held in October for the first time in 13 years, though polls were marred by opposition party boycotts and threats of violence, and turnout was low. Panchayat (local council) elections in November and December saw high turnout in some constituencies.

The legal framework governing elections is broadly perceived as fair. Elections are overseen by the Election Commission of India, a respected and largely independent body. However, intimidation of election workers and electoral authorities by militant groups can interfere with the orderly implementation of electoral laws and regulations.

B. POLITICAL PLURALISM AND PARTICIPATION: 9 / 16

B1.      Do the people have the right to organize in different political parties or other competitive political groupings of their choice, and is the system free of undue obstacles to the rise and fall of these competing parties or groupings? 2 / 4

The state permits a competitive multiparty system. While new political parties must register with the Electoral Commission, parties may generally form freely, and there are mechanisms by which independent candidates may stand for office. However, normal party politics are often disrupted by militant violence, intimidation, and separatist boycotts.

For more than a decade, state-level power has rotated between the two largest Kashmiri parties: the People’s Democratic Party (PDP) and the Jammu and Kashmir National Conference (JKNC). The Hindu nationalist BJP has made significant electoral inroads in recent years.

B3.      Are the people’s political choices free from domination by the military, foreign powers, religious hierarchies, economic oligarchies, or any other powerful group that is not democratically accountable? 2 / 4

B4.      Do various segments of the population (including ethnic, religious, gender, LGBT, and other relevant groups) have full political rights and electoral opportunities? 2 / 4

While Kashmir’s chief minister in the first half of 2018 was a woman, women are generally underrepresented in politics.

C2.      Are safeguards against official corruption strong and effective? 1 / 4

Corruption in Jammu and Kashmir is widespread, and while the government has taken some steps to combat it, these have yet to bring about lasting improvements. A 2011 law established an anticorruption commission with far-reaching investigatory powers. The commission has processed more than a thousand complaints since the first commissioners were appointed in 2013 and has filed a handful of bribery charges against public officials. However, few corruption cases result in convictions. A survey conducted by the Indian think tank CMS in 2017 found that 84 percent of respondents believed corruption in the state to be increasing.

C3.      Does the government operate with openness and transparency? 1 / 4

The state administration generally operates with opacity. In January 2018, the PDP-led government faced renewed allegations of making large numbers of illegal appointments based on nepotism.

Print media thrive in Jammu and Kashmir, and online media have proliferated, providing new platforms for public discussion. However, threats of government reprisals, including the detention of journalists under the Public Safety Act, continue to intimidate media workers.

In June, a prominent Kashmiri journalist, Shujaat Bukhari, was assassinated by unknown assailants in Srinagar—the first such murder in the region in nearly a decade. The August arrest and detention of another journalist, Aasif Sultan—who was still being held at the end of the year—has raised further concerns about press freedoms.

D2.      Are individuals free to practice and express their religious faith or nonbelief in public and private? 2 / 4

Freedom of worship is generally respected by the authorities. However, communal violence between Muslims and Hindus periodically flares up, and many have been injured and killed as a result. The alleged rape and murder of an eight-year-old Muslim girl by a group of Hindu men in January inflamed religious tensions in 2018, leading to sometimes-violent protests and clashes.

D3.      Is there academic freedom, and is the educational system free from extensive political indoctrination? 2 / 4

Academic freedom is often circumscribed. Authorities monitor the research produced at Kashmiri universities, and a combination of proactive and self-censorship discourages students and professors from pursuing sensitive topics of inquiry. Colleges and universities were closed for over half of 2016 owing to unrest; further closures took place in 2017 and 2018.

D4.      Are individuals free to express their personal views on political or other sensitive topics without fear of surveillance or retribution? 3 / 4

While private discussion is robust, fear of reprisals by government or militant forces can serve as a deterrent to uninhibited speech. The government frequently suspends access to mobile internet services, particularly in the southern districts of the Kashmir Valley, citing security concerns.

Freedom of assembly is frequently restricted during times of unrest. Requests for permits for public gatherings submitted by the separatist All Parties Hurriyat Conference (APHC) are often denied. Separatist leaders are frequently arrested prior to planned demonstrations. Curfews were repeatedly imposed in parts of the state in 2018 in response to unrest and militant violence.

E2.      Is there freedom for nongovernmental organizations, particularly those that are engaged in human rights– and governance-related work? 2 / 4

E3.      Is there freedom for trade unions and similar professional or labor organizations? 2 / 4

Although workers have the right to form unions and engage in collective bargaining under Indian law, union rights are inconsistently upheld.

F3.       Is there protection from the illegitimate use of physical force and freedom from war and insurgencies? 1 / 4

After several years of relative stability, security in the state deteriorated sharply after the 2016 killing of Burhan Muzaffar Wani, a popular separatist militant leader. The situation remained volatile in 2018, when at least 451 civilians, security personnel, and militants were reportedly killed in militant-related violence. Indian authorities in May announced that troops would respect a ceasefire over the month of Ramadan, but it collapsed after a rise in terror-related incidents.

Indian security personnel have continued to carry out arbitrary arrests and detentions, torture, forced disappearances, and custodial killings of suspected militants and their alleged civilian sympathizers, and generally enjoy impunity. In June, the Office of the UN High Commissioner for Human Rights (OHCHR) released a report highlighting human rights violations in the Kashmir region since 2016; the report condemned excessive and extrajudicial violence committed by Indian security forces, including the 2016 use of pellet guns against civilian protesters.

Women continue to be subjected to harassment, intimidation, and violent attacks, including rape and murder, at the hands of both the security forces and militant groups

F4.       Do laws, policies, and practices guarantee equal treatment of various segments of the population? 1 / 4

A pattern of violence targeting Pandits, or Kashmiri Hindus, has forced several hundred thousand Hindus to flee their homes in the region over the years, and many continue to reside in refugee camps. Other religious and ethnic minorities, such as Sikhs and Gurjars, have been targeted in the past, but such reports have recently become less frequent in recent years.

G1.      Do individuals enjoy freedom of movement, including the ability to change their place of residence, employment, or education? 2 / 4

Freedom of movement is curtailed by both state and federal authorities. Curfews were imposed in parts of the state in 2018 in response to unrest and militant violence.

G2.      Are individuals able to exercise the right to own property and establish private businesses without undue interference from state or nonstate actors? 2 / 4

G3.      Do individuals enjoy personal social freedoms, including choice of marriage partner and size of family, protection from domestic violence, and control over appearance? 2 / 4

Many women face domestic violence and other forms of abuse.

*Indicates a territory as opposed to an independent country.