Picking Up the Pieces: Turkey Policy after the Syria Withdrawal 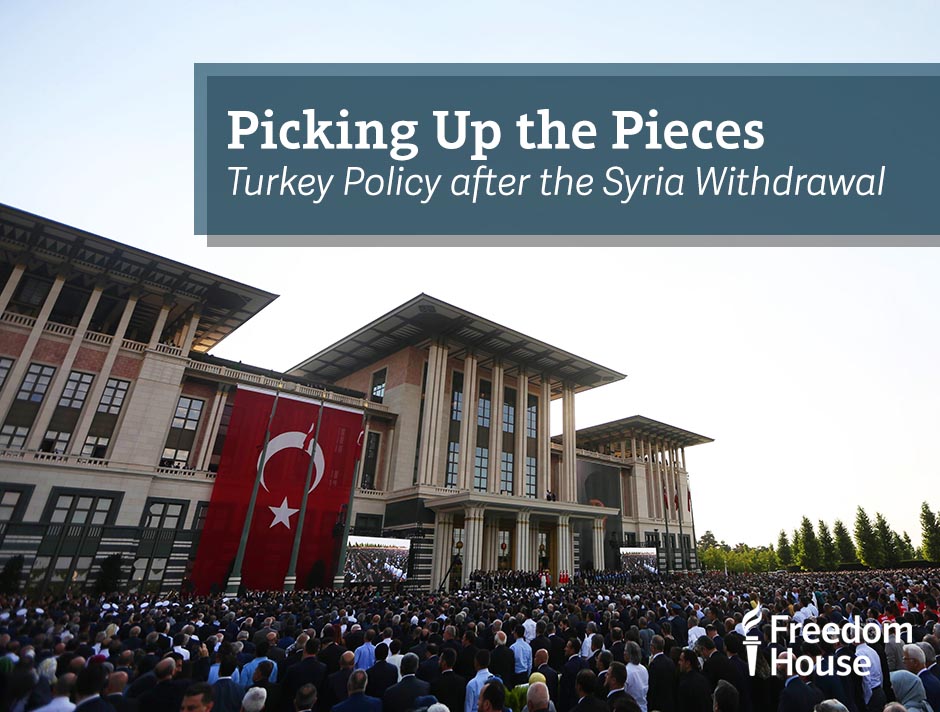 With Turkey’s strategic realignment away from the United States and NATO now clearly evident, it is time for Washington to follow through on steps that had already begun to insulate US interests from Ankara’s troubling drift, and to take new steps that will demonstrate US support for democratic actors in Turkey and across the region. US policy toward Turkey should avoid kneejerk responses and focus on advancing larger strategic interests.

For several years, US policymakers have faced the burning question of whether Turkey’s descent into autocratic rule under President Recep Tayyip Erdoğan would result in its strategic realignment away the United States and NATO. That question has now been answered in the affirmative. It is time for Washington to follow through on steps that had already begun to insulate the United States from Turkey’s troubling drift, and to take new steps that will demonstrate US  support for democratic actors in Turkey and across the region.

In the absence of coherent policy leadership from the White House following the abrupt withdrawal of US military forces from northeastern Syria, Congress must fill the void. Lawmakers should approach the issue calmly but firmly, with an understanding of the long-term dynamics between the United States and Turkey, and an appreciation for Turkey’s critical importance to the fate of democracy in the Middle East and Southeastern Europe. They should refrain from any moves that would exacerbate the situation without benefiting either the United States or the people of Turkey and its neighborhood. Yet if Congress fails to establish consistent US policy parameters, Washington’s credibility in the region will continue to diminish.

A recurring problem over the past decade is that US policy on Turkey has been subordinated to the Syria policy. A rash response to the recent US withdrawal from northeastern Syria and the Turkish incursion that followed would simply repeat and entrench that mistake. What Washington needs instead are policies that take seriously the long-term challenges and consequences of Turkey’s autocratization and realignment.

The guiding principles of the policy approach should be (1) to insulate US and allied interests from the consequences of Turkey’s alignment with Russia, (2) to support democratic actors in Turkey, and (3) to leave the door open to a possible return to partnership with Turkey under different political leadership in the future.

The drawbacks of new sanctions legislation

None of these principles would be served by enacting new sanctions packages, several of which were proposed in Congress last month. In fact, new sanctions on Turkey would probably make things  worse. Lawmakers should keep the focus on the bigger strategic issues, including by insisting that the administration implement existing sanctions legislation related to Turkey’s pivot toward Russia.

One goal of all the recent sanctions bills in Congress is to stop Turkish attacks in northeastern Syria against the People’s Protection Units (YPG), the United States’ local partners in the fight against the Islamic State militant group. None of the bills would actually accomplish that, first and foremost because they are too late: the Russian-Turkish condominium in northeastern Syria is already in effect, and there is now only limited fighting between Turkish-led forces and the YPG. Even cutting off arms sales to the Turkish military would not affect its ability to maintain control over the Syrian territory it occupies. Imposing sanctions on Turkey for an incursion that was only made possible by the US withdrawal, and in a form that would not change the situation on the ground, could simply reinforce the perception that the United States is a paper tiger on these issues.

The same questions about intended versus actual impact should be asked about bills that would mandate public reporting on President Erdoğan’s net worth and assets. There is probably quite a bit of fire to go with all the smoke about corruption in Erdoğan’s family. However, he is likely to remain in power through at least 2023, if not much longer. Releasing information about his net worth might be intended to harm his political standing in Turkey, but given his control over the media and rampant anti-Americanism among his supporters, it cannot be expected to have that effect.

Similarly, harsh economic sanctions—including any that target Turkish financial institutions in general—would only stoke nationalist support for Erdoğan. His military interventions in Syria are broadly popular in Turkey and have been a political boon for him personally, putting pressure on the fragile alliance between opposition nationalists and the pro-Kurdish left that defeated the ruling party in local elections earlier this year. Broad sanctions from the United States would allow Erdoğan to portray himself yet again as the defender of the nation against outsiders.

Moreover, such sanctions would be held up as an excuse for Turkey’s existing economic problems, and as a distraction from the sobering realities that Russia and the Syrian regime now control large stretches of the border, and that refugees will not be returning to Syria as the president has promised. Congress should not give Erdoğan an out for the mistakes he has made.

The benefits of applying pressure with existing tools

Among the other reasons not to legislate new sanctions is the fact that there are already strong measures available, and they are directed toward the most important strategic issues. Turkey’s purchase of an S-400 air defense system from Russia plainly meets the definition of a “significant transaction” under Section 231 of the Countering America’s Adversaries through Sanctions Act (CAATSA), despite the administration’s reluctance to apply it since Turkey took delivery of the system this summer. Congress should pass follow-up legislation to remove any ambiguity about this interpretation and require the executive branch to implement the S-400 CAATSA sanctions without any waivers. It could narrow the “menu” of options provided under CAATSA and specify which sanctions it wants the executive to impose, focusing on severe but narrow penalties for defense entities in Turkey that are involved in the procurement. This would send a strong message to Turkey, as well as to any other countries that might be contemplating such transactions with Russia.

Congress should also instruct the Department of Defense to fully remove Turkey—which is currently only suspended—from the F-35 consortium as punishment for the S-400 delivery, ending a significant component of future Turkish defense cooperation that will reverberate through the defense industry. At the same time, Congress should work with the Pentagon to remove US nuclear weapons from the Incirlik airbase in Turkey and otherwise wind down the US presence in Turkey in favor of more stable and hospitable basing alternatives in the region. With reports in the Turkish press that Turkey will purchase Su-35 fighter jets from Russia as well, it is time to accept that the current government in Ankara is giving up on full membership in NATO. The North Atlantic Treaty does not contain an expulsion option, and the United States’ commitment to the Turkish people should endure, but there are many ways to compartmentalize Turkey within the alliance until democratic leadership and consistent cooperation are restored.

To bolster US credibility and law enforcement more broadly, Congress should support efforts to punish Turkish entities involved in violating US sanctions on Iran. In the midst of the crisis in Syria in October, the Department of Justice brought new charges against Turkey’s state-owned HalkBank for money laundering and Iran-related sanctions offenses. The charges are similar to those that previously resulted in convictions against individual HalkBank executives in 2018, and they appear to be serving as a kind of replacement for the Treasury Department’s failure to levy expected fines against the bank. Congress should hold hearings to investigate reports that the White House sought to delay or avoid imposing the fines, and it should protect the federal prosecutors pursuing the HalkBank charges from any political interference.

In addition, as Freedom House has previously recommended, Congress should take bold steps to support democracy in Turkey. Appropriating funds to buttress independent journalism, democracy activists, and human rights defenders is a measure that has ample precedent in US foreign policy, but that the US has been reluctant to adopt in the case of Turkey. The newly introduced Turkey Human Rights Promotion Act (S. 2832) is one proposal that would advance this goal, providing support for efforts to combat political persecution. The next step would be to appropriate several million dollars per year to a dedicated fund for sustained democracy activities inside Turkey. Such an investment would be a commitment to the country’s future, demonstrating that the United States will not give up on Turkey and helping to build relationships that will last beyond the current crop of political leaders.

Finally, Congress should ensure that its approach to Turkey policy is embedded in a regional context. Replacing Turkey’s role in the transatlantic security architecture will require relying more on other allies, and assuring them of US commitment. The Eastern Mediterranean Security and Energy Partnership Act of 2019 (S. 1102/H.R. 2913) is an example of draft legislation that would directly address the need to reduce dependence on Turkey in a crucial region.

Turkey’s rupture with the United States is deeply disturbing, but there is a significant risk that ill-considered responses could make the situation worse and do further damage to US leadership. In the absence of constructive contributions from the White House, Congress has a responsibility to step forward and provide clear guidance on how to protect US and allied interests from the consequences of Turkey’s autocratization and alignment with Russia. At the same time, Congress should offer long-term support to embattled democratic forces inside Turkey in order to build relationships for the future and hold out the promise of a renewed strategic partnership.