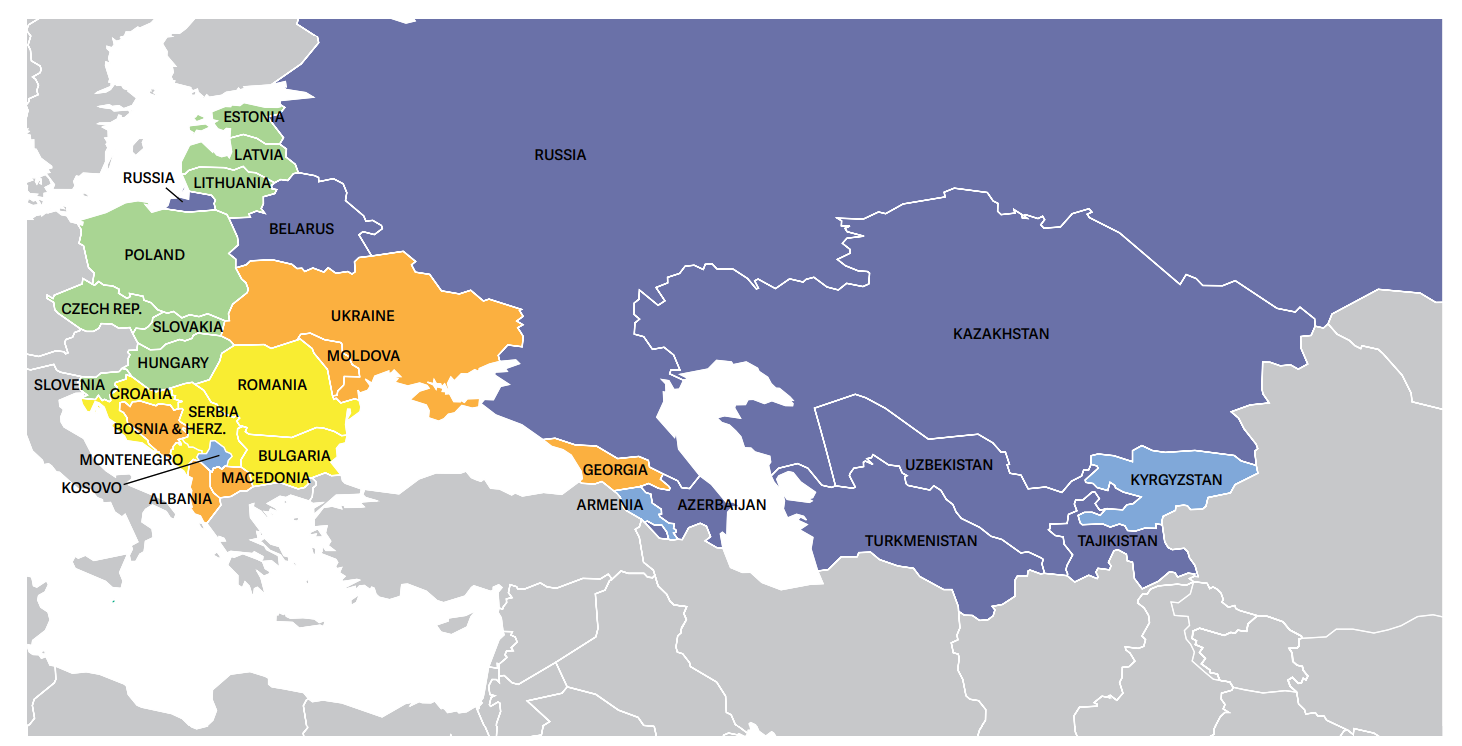 Nations in Transit evaluates the state of democracy in the region stretching from Central Europe to Central Asia. For all 29 countries in Nations in Transit, Freedom House—in consultation with the report authors, a panel of expert advisers, and a group of regional reviewers—provides numerical ratings in seven categories that broadly represent the institutional underpinnings of liberal democracy. These include elected state institutions (local and national governments), unelected state institutions (the judiciary and anticorruption authorities), and unelected nonstate institutions (the media and civil society). The ratings are based on a scale of 1 to 7, with 1 representing the lowest and 7 the highest level of democracy. The Democracy Score is a straight average of the seven indicators. In 2020, Freedom House introduced the Democracy Percentage, which is a translation of the Democracy Score to the 0—100 scale, with 0 representing the lowest and 100 the highest level of democracy. Nations in Transit 2021 covers events from January 1 through December 31, 2020.

Countries receiving a Democracy Score of 6.01–7.00 closely embody the best policies and practices of liberal democracy.

Countries receiving a Democracy Score of 5.01–6.00 closely embody the best policies and practices of liberal democracy. However, challenges largely associated with corruption contribute to a slightly lower score.

Countries receiving a Democracy Score of 4.01–5.00 are electoral democracies that meet relatively high standards for the selection of national leaders but exhibit some weaknesses in their defense of political rights and civil liberties.

Countries receiving a Democracy Score of 3.01–4.00 are typically electoral democracies that meet only minimum standards for the selection of national leaders. Democratic institutions are fragile and substantial challenges to the protection of political rights and civil liberties exist. The potential for sustainable, liberal democracy is unclear.

Countries receiving a Democracy Score of 2.01–3.00 attempt to mask authoritarianism or rely on external power structures with limited respect for the institutions and practices of democracy. They typically fail to meet even the minimum standards of self-governing, electoral democracy.

Countries receiving a Democracy Score of 1.00–2.00 are closed societies in which dictators prevent political competition and pluralism and are responsible for widespread violations of basic political, civil, and human rights.

Nations in Transit Checklist of Questions

1.    Is the country’s governmental system democratic?

2.    Is the country’s governmental system stable?

3.    Is the legislature independent, effective, and accountable to the public?

4.    Is the executive branch independent, effective, and accountable to the public?

5.    Are the military and security services subject to democratic oversight?

1.    Are the principles of local democratic government enshrined in law and respected in practice?

2.    Are citizens able to choose their local leaders in free and fair elections?

5.    Do democratically elected local authorities have the resources and capacity needed to fulfill their responsibilities?

6.    Do democratically elected local authorities operate with transparency and accountability to citizens?