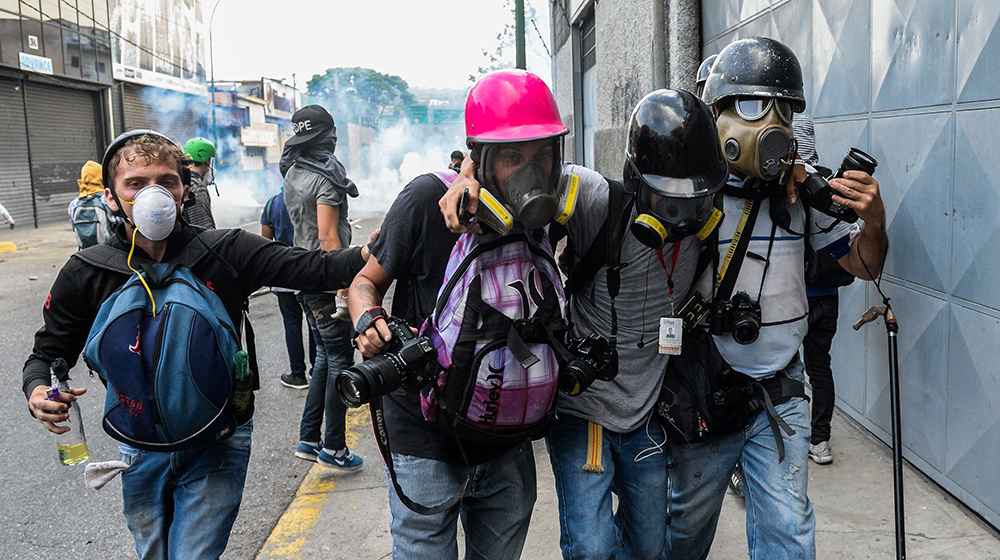 Attacks on the Record

Press freedom is facing new threats in major democracies as well as in repressive states, where authorities are focusing their efforts on social media and other online platforms after subduing the independence of major print and broadcast outlets.

The analysis below—drawn from the findings of Freedom House’s most recent Freedom in the World, Freedom on the Net, and Nations in Transit research projects and from its in-country programs—shows that media independence is under pressure in every region of the world, but also that dedicated journalists are still playing a vital role in even the most hostile environments.

The Threat to Democracies

As recently as five years ago, global pressure on the media did not appear to affect the United States or the established democracies of Europe in any significant way. Today, populist leaders constitute a major threat to free expression in these open societies. Ambitious politicians around the world are increasingly willing to dispense with the norms of behavior that held their predecessors in check, in some cases blatantly undermining press freedom.

A press corps that calls out government failures is fundamental to the functioning of all democracies. But populist leaders are intentionally denouncing critical media and their coverage as biased, and the factual information they report as “fake,” weakening their credibility and leaving citizens unsure whom to believe. The leaders then have more leeway to dictate their own narrative and divert attention from corruption and other abuses. Moreover, by condemning the press as not only unfair but treasonous or criminal, antidemocratic politicians prepare the ground for attacks on other pillars of democracy, such as the judiciary.

For example, in Poland, the National Broadcasting Council fined leading station TVN24 the equivalent of $430,000 in December 2017 for “promoting illegal activities” through its reporting on antigovernment protests. The move sent a clear message that publicizing such dissent will not be tolerated, though the fine itself was annulled in January. In France, when a journalist outside a conference in May 2017 asked far-right presidential hopeful Marine Le Pen about her involvement in a parliamentary funds scandal, her private bodyguard pinned the journalist’s arms behind his back and hustled him out of the room, illustrating her party’s pattern of disdain for ordinary media scrutiny. In the United States, President Donald Trump has regularly disparaged individual journalists and news outlets when they challenge him or report factually on unwelcome developments.

The severity of the pressure differs from country to country, but the goal is always the same: Prevent the press from serving as a check on power. If the facts cannot be reported or the basic concept of truth is diluted, political leaders can do as they wish with no accountability for the results.

In Hungary, the ruling Fidesz party has gone a step further, consolidating control of private media outlets in the hands of government allies. The outlets continue to exist under their new owners, but both their independence and their critical nature are quashed. This hollowing of the press has been a key component of the party’s dismantling of Hungarian democracy.

The rise of democratically elected leaders who seek to cripple or co-opt the independent media has been compounded by external forces, most prominently the authoritarian government in Russia. As Moscow plants disinformation in the media environments of democratic countries, the public’s sense that the press is unreliable grows. Democratic governments have fumbled in their search for effective mechanisms to combat this threat.

Journalists in democracies continue to do their work, despite the sometimes harrowing new conditions. But if the free press, an essential component of democratic governance, is to survive as such, other elements of the democratic immune system must work to support it. These include opposition parties, an impartial judicial system, civil society organizations, and, most important, citizens—those who provide the revenue that keeps journalists in business and the votes that keep politicians in power.

The Power of Journalism

Even as journalists face harassment and arrest in a growing number of countries, their work can still expose egregious abuses, help victims find safety, and hold the corrupt and the dishonest to account. In dictatorships and democracies alike, courageous journalists have defied powerful interests to bring stories to the public, enabling their audiences to take action and bring about real change.

Slovakia: Exposing mafia links at the highest levels of government

Slovakian journalist Ján Kuciak and his fiancée were murdered by unknown assailants at the end of February 2018, but the impact of Kuciak’s work only grew. At the time of his death, Kuciak, who was already well known for his reporting on the Panama Papers, was investigating corruption in the administration of Prime Minister Robert Fico. His final story identified ties between members of the government and an Italian organized crime group. A draft of the report was published posthumously.

The circumstances of Kuciak’s murder added to long-standing public frustration with government corruption, leading to mass demonstrations. Tens of thousands of Slovakians joined the protests, the largest in the country since the 1989 Velvet Revolution. One of the organizers, Katarina Nagy Pazmany, said it was “unacceptable for a journalist to be murdered in a democratic country and the motive to be tied to his work.” Among organizers’ demands were a thorough investigation of Kuciak’s death and a “new trustworthy government.” Calls for Fico’s resignation became a centerpiece of the protests.

Two close associates of Fico who were implicated in Kuciak’s reporting resigned days after his murder. The minister of culture resigned to express shame that a journalist had been killed during his tenure. The interior minister, who was seen as a possible obstacle to a thorough investigation into Kuciak’s murder, also resigned. Finally, Fico capitulated and resigned less than two weeks later, though his party remained in power.

South Africa: Prompting a presidential resignation after a decade of corruption charges

South African president Jacob Zuma dodged charges of corruption for over a decade. In 2017, as his legal battles continued, the Gupta Leaks were published.

The Gupta brothers ran an extensive business operation that employed Zuma family members in high positions, and were accused of wielding enormous influence in Zuma’s administration. In May 2017, a group of investigative journalists published articles about corruption and state capture under Zuma based on a collection of leaked emails and other documents from inside the Gupta family’s business empire. The Gupta Leaks detailed corrupt connections between the Guptas and a range of government ministers and public companies. By late 2017, American and British authorities were investigating the use of banks in their countries for potentially illicit transactions involving the Gupta family and the South African government.

In the midst of the scandal, growing concerns about its impact on the economy, and signs that it could threaten his party’s hold on power, Zuma grudgingly stepped down as president in February 2018. He now faces prosecution on charges of fraud, racketeering, and money laundering that date back to the 1990s, before his presidency. Authorities have pursued the arrest of members of the Gupta family and continue to investigate possible corruption during Zuma’s tenure as president.

In the United States, the brevity of Tom Price’s tenure as head of the Department of Health and Human Services (HHS) can be traced to the work of Politico journalists Dan Diamond and Rachana Pradhan. In September 2017, the pair published stories detailing Price’s extensive use of charter flights, bringing his total travel costs to over $1 million in less than six months.

In a departure from the practice of previous cabinet secretaries, Price’s office revealed few details about his schedule. It was only after months of Diamond and Pradhan’s dogged reporting, which included cultivating confidential sources and staking out airports, that Price’s expensive travel habits were exposed. Without this extensive journalistic undertaking, the expenditures may have gone unnoticed.

Price resigned, and a congressional committee opened an investigation into his use of private aircraft. Six months later, the effects of Diamond and Pradhan’s reporting continued to be felt. John Bardis, the HHS official who approved Price’s use of charter flights and the focus of ongoing inquiries, announced his own resignation in March.

In April 2017, reporter Yelena Milashina alerted the world to a violent purge of men suspected of being gay in the Russian republic of Chechnya. Novaya Gazeta, an independent Russian newspaper known for investigative reporting, published her findings about the state-sanctioned campaign of illegal detention, torture, and murder being carried out by the Chechen police. Milashina and her sources took on great risks by pursuing the story; six of her fellow Novaya Gazeta reporters have been killed over the years, including renowned journalist Anna Politkovskaya.

Milashina had to publish enough information to provide a credible account, but not reveal so much that any of her sources would be identified and face retribution. She received death threats in response to her reporting and, fearing for her safety, temporarily left Russia shortly after publishing the story.

Although it put her own well-being at risk, Milashina’s reporting saved lives. Since her work was published, scores of vulnerable men and women have received assistance in fleeing Chechnya; countries including Canada, France, Germany, Lithuania, and the Netherlands have accepted the refugees. However, many other countries chose not to help persecuted Chechens, and some individuals who gained asylum found that leaving Chechnya did not guarantee their safety. Building on Milashina’s efforts, other journalists have discovered that Chechen refugees in Western Europe are subject to attacks by fellow Chechen immigrants and cross-border harassment by the Chechen authorities.

Violence against Journalists Is a Transnational Enterprise