Violence against Journalists Is a Transnational Enterprise

It’s not too late for democratic leaders to establish a credible global deterrent against the murder of journalists. 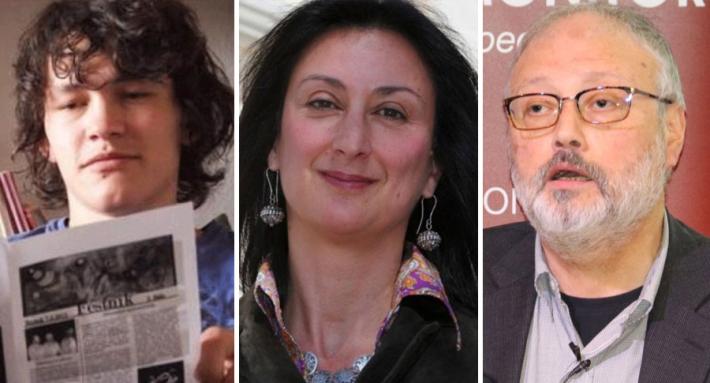 It’s not too late for democratic leaders to establish a credible global deterrent against the murder of journalists.

The disappearance and presumed murder of exiled Saudi journalist Jamal Khashoggi is a troubling reminder that work-related killings and deliberate assassinations of reporters have risen substantially during this century. Combined with other recent politically tinged murders, the Khashoggi case has underscored concerns about the security of journalists in Europe and other previously safe and democratic environments.

In the exchange below, Arch Puddington, Distinguished Scholar for Democracy Studies at Freedom House, answers some frequently asked questions about the dangers faced by journalists today.

Have murders of journalists increased in recent times?

Statistics from the Committee to Protect Journalists and UNESCO both show that roughly 1,300 journalists have been killed around the world since the early 1990s, and the annual totals have grown considerably higher in the past two decades. Most recent killings have occurred in conflict zones like Syria, Iraq, and Yemen, as well as in such dangerous or repressive environments as Mexico, Russia, and Pakistan.

Are such murders on the rise in Europe?

Although there have been some high-profile assassinations in Europe over the past several years, the number of murders in the region is still quite low on a comparative basis, as it is in the United States.

What about the killings in Malta and Slovakia, and now the presumed murder of Jamal Khashoggi at the Saudi consulate in Istanbul?

The first two killings—of Daphne Caruana Galizia in Malta in October 2017 and Ján Kuciak in Slovakia in February 2018—are especially troubling because they targeted journalists who were engaged in serious investigative research focused on the links between transnational organized crime and senior government officials. Khashoggi’s case is also chilling in that it involves a well-known commentator living in exile who raised uncomfortable questions about an autocrat in his home country.

As Anne Applebaum wrote recently, both journalism and the malfeasance it uncovers have evolved into global enterprises. In the pre-internet era, crusading journalists could be silenced through censorship or expulsion. Today, a writer like Khashoggi, working from abroad, could reach substantial audiences both inside Saudi Arabia and among the international business and political figures who might determine the success or failure of Crown Prince Mohammed bin Salman’s reign. The cross-border nature of the problem makes it all the more important for foreign governments to contribute to a solution.

Have President Trump’s hostile comments about journalists contributed to a more dangerous environment for the press?

Trump’s polemics, his condemnation of mainstream media outlets as “enemies of the people,” certainly haven’t helped. But a more serious problem arises from Trump’s words of acclaim for dictators and autocrats. An incomplete list of the strongmen Trump has praised would include Vladimir Putin, Xi Jinping, Rodrigo Duterte, Recep Tayyip Erdoğan, Kim Jong-un, Abdel Fattah al-Sisi, and of course, Mohammed bin Salman. It cannot come as a surprise when an already brutal autocrat whom the American president has nevertheless called a strong leader or a friend draws the conclusion that he can crush his critics with impunity.

Can anything be done to address the growing number of journalist killings?

The United States has a useful instrument of accountability in the Global Magnitsky Act, which gives the president the legal authority to impose travel bans and asset freezes on foreign individuals and entities involved in human rights violations in any country. There have already been calls for Global Magnitsky sanctions against Saudi officials implicated in the Khashoggi case, and like-minded governments with similar laws could follow suit.

But the deterrent effect of such penalties would be greatly magnified if President Trump and other leaders of democratic countries made it clear in their public and private statements that they will not tolerate violence against journalists anywhere in the world.

Are there signs of hope for the future?

These are hard times for journalists. Populist leaders are often hostile to reporters, regularly denounce the press in speeches, and take concrete measures against the media once in office. Jair Bolsonaro, the leading candidate in Brazil’s upcoming presidential runoff election, has described the media as “trash.” Even worse, authoritarians like Hungary’s Viktor Orbán and Turkey’s Erdoğan have captured control of the national media through a series of coerced acquisitions by crony businessmen.

But there are also hopeful signs. In Slovakia, the murder of Ján Kuciak triggered public protests and the resignation of Prime Minister Robert Fico, an aggressive press critic, though his party remains in power. Three suspects have been arrested in Caruana Galizia’s case, and the Maltese government is under pressure to allow a public inquiry that would question politicians and determine who ordered her killing. The Khashoggi case has spurred calls for sanctions and other measures against Saudi Arabia, with some prominent figures even calling for the king to remove Mohammed bin Salman from office.

If democratic leaders take the lessons of these incidents to heart, they will use all available means to discourage attacks against journalists by ostensible allies—not just because press freedom is a central pillar of democracy, but also because such lawless actions are inimical to their own political and diplomatic goals.