At the 2022 Summit of the Americas, Leaders Must Deliver for Their People

The region is suffering from economic hardship and years of democratic decline. 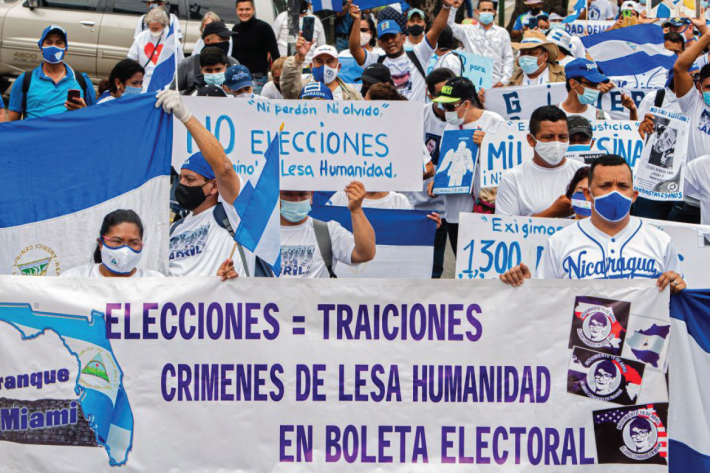 Nicaraguans living in Costa Rica demonstrate in San José to commemorate the third anniversary of the beginning of the protests against the government of Nicaraguan President Daniel Ortega, on April 18, 2021. Nicaragua's political crisis erupted in April 2018, when protests mushroomed into a popular uprising that was met with a brutal crackdown in which hundreds were killed. (Image Credit: EZEQUIEL BECERRA/AFP via Getty Images)

This week, the United States will host the Summit of the Americas for the first time since the gatherings began in 1994. The main purpose of the summits has been to promote regional cooperation in key policy areas, such as economic development, trade, security, and democracy. But the assemblies of political leaders from across the Western Hemisphere have also offered an opportunity for civil society organizations, representatives of Indigenous communities, business executives, and young entrepreneurs to meet and develop their own action plans on important topics. These groups of citizens will be among the main beneficiaries of any progress that might emerge from the summit.

Unfortunately, many heads of state—including those of Honduras, Guatemala, El Salvador, and Mexico—have decided not to attend this year’s meeting, reflecting a deepening rift in the hemisphere between governments that seek to uphold democratic values and those that have either adopted or tolerated more authoritarian practices. This divide is certainly not a new one, but it has grown markedly worse over the past decade, and the resulting lack of cooperation at a time of great hardship could cost the people of the Americas dearly.

A history of achievement and controversy

At the 1994 Summit of the Americas in Miami, the 34 heads of state in attendance were all democratically elected. The only country missing was Cuba. A notable outcome of that summit was the Inter-American Convention Against Corruption (IACAC), which was formally adopted by the member nations of the Organization of American States (OAS) in 1996 and came into force in March 1997. The third summit, held in Canada in 2001, produced the Inter-American Democratic Charter, a groundbreaking affirmation that the peoples of the hemisphere had a right to democracy and that the governments had an obligation to promote and defend it. The charter was approved by all 34 members of the OAS, excluding Cuba, on September 11 of that year.

While the subsequent summits also generated some progress, democratic conditions in the region began to deteriorate. The 2012 summit in Colombia ended without agreement on whether Cuba’s authoritarian leaders should be invited to the next gathering. The presidents of Ecuador and Nicaragua did not even attend, and several others warned that they would boycott future summits if Cuba were left out. Cuban representatives were finally invited to the summit held in Panama in 2015, but new friction erupted between the United States and Venezuela, with Venezuelan president Nicolás Maduro accusing Washington of trying to overthrow his government. US president Barack Obama issued an executive order imposing sanctions on seven Venezuelan officials for human rights violations and declaring that the country was a threat to US national security.

The current state of democracy in the America 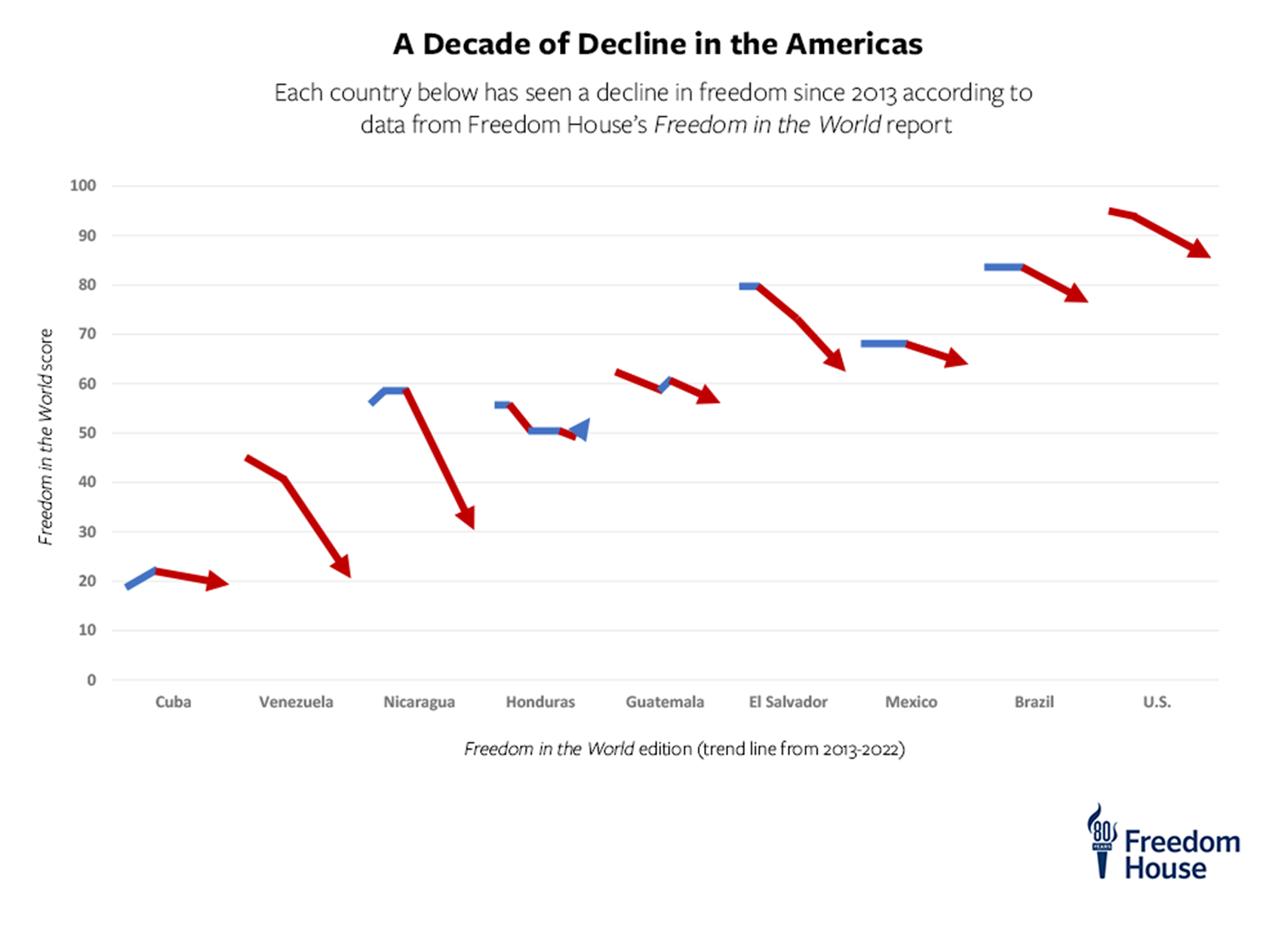 This year’s summit finds the region in a particularly poor condition. Not only is the Russian invasion of Ukraine driving up food and energy prices, but many national economies are still struggling to recuperate from the effects of COVID-19 pandemic, and authoritarian rule continues to expand. According to Freedom House’s latest Freedom in the World report, only 23 of the 35 countries in the Americas are now rated Free, while eight are Partly Free and four are rated Not Free, with Haiti joining Cuba, Nicaragua, and Venezuela in the worst-performing category.

Indeed, over the past 16 years, the region has shown a steady decline in political rights and civil liberties, with the largest downgrades occurring in Nicaragua, Venezuela, Mexico, El Salvador, Honduras, the Dominican Republic, and the United States.

The trend, which matches a global pattern over the same period, is driven by a number of factors, including political polarization and dysfunction within major democracies like the United States and Brazil, expanding influence operations by the authoritarian regimes in China and Russia, and a related willingness to defy what are often inconsistent or erratic U.S. policies toward the region.

Seizing an opportunity for progress

There is clearly a growing contrast between the aspirational goals of the Inter-American Democratic Charter and actual governance practices in the hemisphere. When it was first invited to the Summit of the Americas in 2015, the Cuban regime was beginning to show signs of reform. But it has since reversed course, and its partners in Nicaragua and Venezuela have established outright dictatorships. All three regimes are all holding large numbers of political prisoners, denying them due process and punishing them simply for exercising their basic human rights.

It is fair to ask why so many other Latin American leaders, particularly those who are skipping the summit, are reluctant to denounce the rise of authoritarian rule in the hemisphere. The answer may lie in the fact that some of them are experimenting with more authoritarian practices themselves, destroying already weakened institutions, removing checks on their authority, empowering and enriching friends or family members, and denying citizens their rights.

The majority of citizens in the hemisphere, meanwhile, want more democratic practices, stronger institutions, and more freedom to pursue their dreams. They want to rise out of poverty, overcome inequality, and not be forced to migrate in search of liberty, security, and opportunity.

One of the key opportunities at the summit is to show that restoring democracy is the best way to deliver public goods, and ultimately peace and prosperity, for the people of the Americas. To ensure that they chart the proper course, government representatives should engage with the gathering’s three official stakeholder forums for civil society, youth, and private enterprise. Even countries whose heads of state are not attending will be represented by ample delegations of human rights defenders and democracy activists, all of whom could play a constructive role. As was highlighted in Freedom House’s recent report on human rights defenders in Latin America, there is a need for a sustained hemispheric dialogue to generate a collaborative agenda that strengthens human rights and democratic governance strategies.

These summits have never been ends in themselves. They are merely an opportunity to promote dialogue and collective action. Some leaders may have chosen not to participate this year, but those who do can still lay the foundation for a more equitable, prosperous, and democratic future in the Western Hemisphere.

Gerardo Berthin is the vice president of international programs at Freedom House.