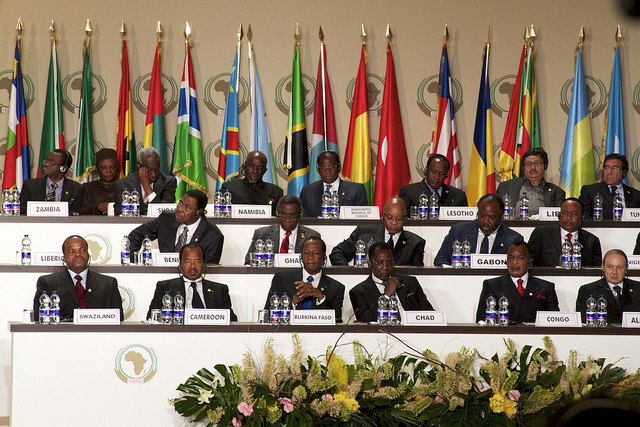 This week African leaders gather in Johannesburg for the 25th African Union Summit, where they will discuss a range of topics, from ongoing conflicts to trade. What will likely not appear on the agenda, however, are the governance challenges that are holding citizens across Africa back.

Here are five pressing democracy and human rights issues the AU needs to confront as well as recommendations on how to get started:

1.  Dismal State of Press Freedom
Over the past decade, press freedom has seen the largest decline of any other fundamental freedom in Africa, according to Freedom in the World 2015. Authoritarian governments continue to use legal pressure, imprisonment, and other forms of harassment to suppress independent reporting. According to the Committee to Project Journalists, 48 journalists were in prison across sub- Saharan Africa at the end of 2014 and 152 journalists were forced into exile between 2009 and 2014 – more than any other region in the world. Even the region’s democracies are taking steps to censor the media. Last year, for example, Botswana used a sedition law to charge an editor and journalist for publishing an article critical of the president. As a result of these negative trends, only three percent of Africans live in countries with a free media.

Recommendation: The African Union should amend Article 12 of the AU Charter on Democracy, Elections and Governance, which calls on State Parties to promote principles and practices necessary for a democratic culture, to specifically include media freedom. The AU should also include a free press as one of the key conditions necessary for free and fair elections as outlined in the Charter’s Chapter 7.

2.  Proliferation of Restrictive Laws
Authoritarian regimes in Africa are increasingly exploiting their country’s legal framework to eliminate opposition rather than relying solely on violence and political suppression. Laws ostensibly designed to regulate civic activity or protect public order are manipulated to restrict the fundamental rights of citizens. Africa has consequently seen an explosion of NGO, public order, and counterterrorism laws that are used to harass and persecute democracy groups and human rights defenders. Ethiopia, for example, used its Anti-Terrorism Proclamation in April 2014 to charge 10 bloggers and journalists with threatening public safety for simply writing about human rights. In Kenya, several human rights organizations recently had their licenses canceled for alleged ties to terrorism – a decision that was eventually overturned by the High Court.

Recommendation:  The AU should work with civil society to develop standards for drafting public safety and NGO legislation that adequately protects citizens without infringing on their constitutionally-guaranteed rights. This legislation should include judicial oversight of surveillance, strict regulations on how long suspects can be detained without charges, and protections for media outlets to publish stories about terrorism.

3. Entrenched Leaders and the Abuse of Term Limits
In April 2015, Burundian President Pierre Nkurunziza became the latest African leader to attempt to extend his tenure beyond the constitutionally-mandated limit, setting off violent protests across the country. With a number of countries preparing for elections in the coming year, there are fears that other countries will face similar unrest as entrenched leaders seek to circumvent or disregard term limits. Rwandan President Paul Kagame and Congolese President Joseph Kabila have already shown signs they are considering ways to extend their terms. Recently, the Economic Community of West African States (ECOWAS) considered a declaration that would limit presidential terms to two, but the declaration was tabled due to pressure from Togo and The Gambia.

Recommendation: The AU should consider passing a declaration similar to the one debated by ECOWAS that would set clear expectations for respecting term limits. AU leaders should also publically condemn any attempts to change, circumvent or violate established term limits, just as they do when military coups take place in the region.

4.  Weak Regional Human Rights Mechanisms
The African Court of Human and Peoples’ Rights is tasked with enforcing the African Charter on Human and People’s Rights, which guarantees citizens throughout Africa a broad array of fundamental freedoms. Unfortunately, the Court has significant shortcomings. Under the current Charter, individuals and human rights groups cannot bring cases before the Court unless their country has signed a special declaration allowing such complaints. To date, only seven countries have signed this provision. Also, last year African leaders further weakened the Court’s human rights mandate when they voted to give sitting heads of state and certain senior government officials immunity from prosecution. The amendment, which has yet to go into effect, caused an outcry among African human rights groups, who see it as another incentivize for authoritarian leaders to hold onto power at any cost.

Recommendation: Africa’s democracies should push to remove the immunity clause. Moreover, countries that have signed the special provision granting NGOs and individuals standing to bring human rights cases before the Court should encourage their counterparts to do the same.

5.  Economic Competitiveness
While Africa is routinely touted as having 7 of the world’s 10 fastest growing economies, it is also home to 15 out of the 20 least competitive. This is according to the World Economic Forum, which found that Africa remains the least economically competitive region in the world. Moreover, Africa’s overall competitiveness has stagnated over the past decade due to structural factors, such as poor infrastructure and high transportation costs, and to socio-economic and political factors. High levels of corruption and government inefficiency, combined with low levels of education, make Africa an expensive and risky place to do business. The region’s democratic countries, however, are faring much better than their authoritarian counterparts. The key components of a functional democracy – efficient institutions, responsible government policies, and a strong rule of law – are the same factors that contribute to a competitive economy.

Recommendation: The African Union, along with the regional economic communities, should include efforts to strengthen democracy and governance in their economic development and integration strategies.