Africa’s Role in Setting a Global Agenda for Democracy: A Q&A with Tiseke Kasambala 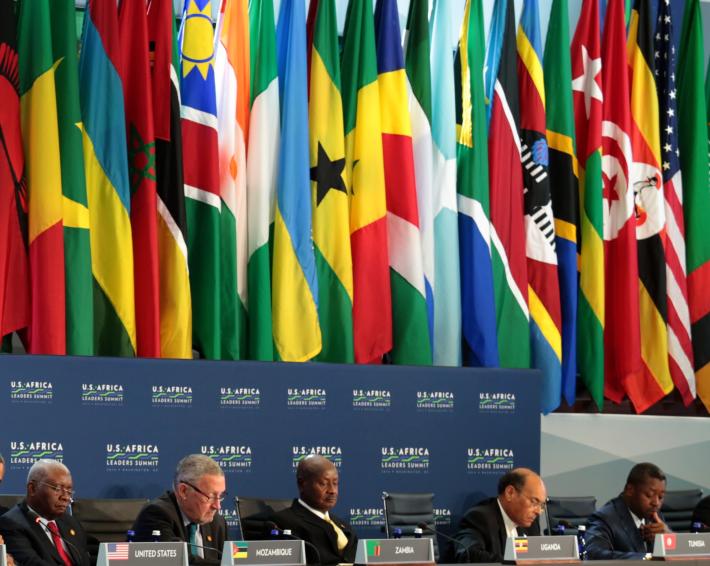 On Tuesday, President Joe Biden opened the US­–Africa Leaders Summit in Washington, DC. We spoke with Tiseke Kasambala, director of Africa programs at Freedom House, about what she expects will be discussed at the summit, and how governments should follow up on commitments they make there.

Freedom House: President Biden is hosting a summit with nearly 50 African heads of state, among many other important figures from across the continent. What is the purpose of the summit, and why is it important?

Tiseke Kasambala: The US­–Africa Leaders Summit brings together the United States government and African heads of state, business leaders, and civil society to “expand and deepen the US–Africa partnership” and discuss increased cooperation on shared global and regional priorities.

While discussions will be wide-ranging, the summit represents an opportunity for the United States government and Africa’s leaders to articulate a clear vision of how democracy underpins positive social and economic transformation for the continent’s 1.4 billion citizens. Meaningful cooperation toward achieving this vision after the summit closes will depend in large part on whether the gathering produces clear commitments to democracy, human rights and rule of law.

What would you like to see happen at this year’s summit?

This summit comes at a critical moment, with democracy under threat globally. Freedom House’s 2022 Freedom in the World report designates only eight African countries as Free. Five African countries—Eritrea, South Sudan, Equatorial Guinea, Central African Republic, and Somalia—measure among the 10 least free countries on the index.

Over the past few years, Africa has been plagued by coups, term-limit manipulation, flawed elections, and growing insecurity and instability in parts of West Africa and the Sahel regions. Even South Africa, an established democracy, faces unprecedented governance and rights challenges including growing corruption, gross inequality, and factionalism within the ruling African National Congress (ANC) that threatens to destabilize the country.

In response to citizens’ demands for political and economic reforms, governments have continued to violate individual freedoms and hamper the work of civil society through repressive laws, violent break-ups of peaceful protests, and arrests and detentions of human rights defenders, activists, and journalists

This decline can only be reversed if the United States, democratic African governments, the African Union (AU) and other regional blocs on the continent increase the cost of repression and impunity and hold governments to their international and regional human rights obligations.

State and nonstate actors that threaten human rights, undermine democratic processes, and commit violent acts should be subject to suspension from membership of regional blocs (as we have seen with Mali, Burkina Faso, Sudan, and Guinea at the AU), and targeted, coordinated sanctions. Perpetrators of serious crimes should be brought to justice. Bilateral trade and investment between the United States and African governments should be anchored by political reforms, anticorruption efforts, and respect for human rights.

Finally, elections are due to be held next year in Nigeria, Zimbabwe, and the Democratic Republic of Congo. There are significant concerns about electoral conditions in all three countries. The United States should use the opportunity of the summit to call on the respective governments to undertake necessary reforms and ensure open, free, and peaceful electoral environments. It should scale up funding on electoral preparedness and issues that affect electoral integrity such as violence and manipulation of the vote.

We are in the middle of the summit as of this conversation. How is it going so far? What are some highlights?

The opening day of the summit featured a series of discussions on climate adaptation, and on the role of Africa’s youth diaspora in issues of peace, security and governance. One of the highlights has been the Civil Society Forum, which has brought together civil society representatives, government officials and leaders from across the continent, and representatives of the United States. Participants on the African side included President Hakainde Hichilema of Zambia, Prime Minister Ulisses Correia e Silva of Cabo Verde, and the minister of foreign affairs of the Gambia, Mamadou Tangara.

The recognition of the key role that civil society plays on the continent is commendable, but leaders at the summit need to walk the talk. African governments should amend or repeal laws that hamper the activities of civil society, and uphold freedoms of assembly and association. They should also refrain from introducing any new restrictive laws.  Governments must hold accountable those found responsible for intimidation, arbitrary arrest, and killings of civil society activists.

Freedom House has recently been working to highlight the plight of political prisoners. What does this problem look like across Africa?

We remain concerned about the health and well-being of multiple political prisoners across Africa.

In Cameroon, for example, the Anglophone crisis continues to impact the work of human rights defenders, prodemocracy activists, and journalists, some of whom have been imprisoned for the peaceful exercise of their freedoms. This includes the Anglophone journalist and filmmaker Tsi Conrad, who is serving a 15-year prison sentence since his arrest in 2016.

In Nigeria, religious and internet freedoms remain under threat. Those expressing humanist and secular views online have faced harsh imprisonment. Among them is Mubarak Bala, who is serving a 24-year prison sentence for his activism, including on social media, by which he campaigned against blasphemy laws and called for respect for human rights.

In Morocco, leaders and participants in peaceful protest movements, as well as the journalists who cover them, continue to face severe repression. Many believe the catalyst for the current, ongoing crackdown on civil liberties in Morocco was the 2017 arrest of the Riffian Hirak movement leader Nasser Zefzafi, who led nonviolent demonstrations against chronic neglect and harassment of civilians by state and ruling elites. He is serving a 20-year prison sentence for supposedly undermining public order and threatening national unity.

How does this meeting relate to the Summit for Democracy, which will have a session hosted in Africa in the spring?

Both summits are a welcome recognition by the United States of the key role that Africa has to play in setting a global agenda for democracy. It is important for the United States to forge strong alliances with democratic governments in the region to counter rising autocracy.

At the same time, it is crucial that concrete actions emanate from these summits on the part of the United States and African governments.

African governments have an opportunity to recommit themselves to meaningful processes of democratization that seek to secure civil and political rights, social-economic rights, and the physical security of their citizens. They can do so by building and sustaining effective democratic institutions, improving governance systems, strengthening national accountability mechanisms, addressing marginalization, and expanding the space for political participation and citizen engagement.

In turn, the United States should redouble its investments in the strengthening of democratic institutions at home such as the judiciary, electoral management bodies, and anticorruption entities, as well as efforts to support civil society organizations, social movements, and prodemocracy actors who remain critical to protecting the space for civic engagement and discourse.