After Lukashenka: Healing a Divided Country

The unprecedented violence over the past seven months in Belarus has revealed ideological divisions in the country that were previously unclear. 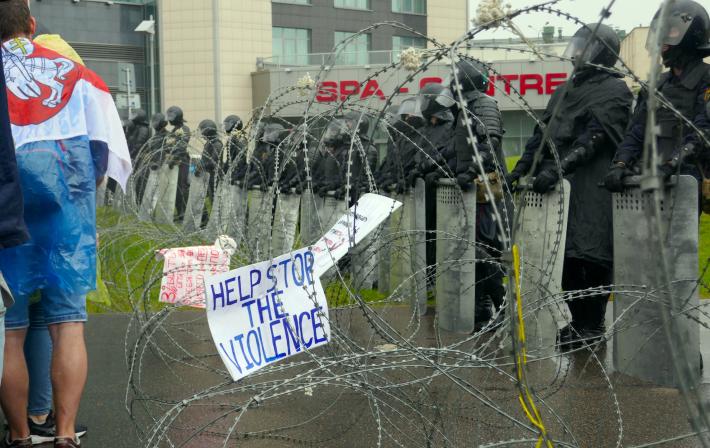 The unprecedented violence over the past seven months in Belarus, beginning after the fraudulent presidential election in August 2020, has revealed ideological divisions in the country that were previously unclear. Recent sociological studies show that Belarusians are roughly split into three groups: those who support the protests and voted for presidential candidate Sviatlana Tsikhanouskaya, those who endorse President Alexander Lukashenka, and political “in-betweeners” who partially agree with the protesters but take neither side. While the limitations of the available studies prevent accurate measurements of the size of each group, the research indicates that the political crisis has intensified social divisions. As politically motivated arrests and torture have continued en masse, couples supporting opposite political sides have separated; family members have limited communication with each other, and friends and neighbors have become enemies. With varying orders of magnitude, the groups have dehumanized each other: Lukashenka supporters have called for protesters to be hanged and their property vandalized. Disparaging media of law enforcement officers have also circulated widely: one video of a law enforcement officer falling from a truck has received thousands of views and likes on social media.

To build a functioning democracy for the future, Belarusians will need to create trust, cooperation, and mutual understanding in society. National reconciliation processes address these needs: they will help change destructive attitudes and acknowledge past suffering. But is it too early to bring it up in Belarus? And what might this process look like in a post-Lukashenka Belarus?

National reconciliation in the context of Belarus

Although Belarus is far from ready to attempt any form of reconciliation, the dialogue on how to heal the divided country has already begun. Understanding the importance of confronting a violent past, prodemocracy groups in Belarus have developed a range of reconciliation measures. For instance, the office of Sviatlana Tsikhanouskaya has prepared a list with the names of state officials and security forces accused of serious crimes, so as to hold perpetrators accountable. The People’s Anti-Crisis Administration (NAU), another body formed by prodemocracy groups, has proposed a plan to reform the Ministry of Internal Affairs, to help restore people’s trust in the institution and avoiding future breakdowns in the rule of law.

To bring justice to victims of political repression, the Coordination Council (CC)—an opposition group that has sought a peaceful resolution to the postelection violence and a rerun of the presidential poll—has developed a concept of “law reinstatement and national reconciliation,” creating a special agency to review instances when citizens’ rights were violated and unlawful and excessive physical force was applied. The agency would decide which public officials should receive criminal punishment for their actions, including demotions, fines, or dismissals. Additionally, the CC has proposed establishing a dedicated government fund to repair material and moral damages for individuals who were the victims of security forces’ violence.

The longer the crisis in Belarus lasts, the more complex reconciliation will become. Victims of the Lukashenka regime’s violence and repression require justice and accountability, but potential mechanisms, such as lustration, are complex and vary in severity. While Belarusian prodemocracy forces are not widely calling for lustration—perhaps a strategic effort to encourage officials in Lukashenka’s government to defect—there are already demands for de-Lukashenization of the state apparatus among factory workers and student coalitions. However, the overall appetite for such measures is unclear.

At the same time, reconciliation strategies currently being discussed mainly consider the legal side of the process. How will the people who oppose each other make peace? How will Belarusian society come to terms with its history and heal from the associated psychosocial trauma? Social and individual reconciliation cannot be imposed on people. Further, calls from state officials for citizens to make peace demand too much psychologically and emotionally from the survivors of violence and their families. Instead, national reconciliation requires bottom-up and victim-centered mechanisms, consisting of community working groups and grassroots initiatives that promote social healing and intergroup dialogue. As in the Baltic states in the 1990s, truth commissions could be another useful means to achieve national reconciliation in Belarus. By collecting people’s stories and preparing truth-seeking reports, the Lithuanian and Latvian commissions helped forge national histories and form the foundations of their democracies.

When conducting national reconciliation in the future, Belarusians must learn from their mistakes and avoid repeating them. In the early 1990s, the attempt to introduce a range of transitional justice measures in Belarus failed. The Belarusian People’s Front party and civil society organizations formed a narrative that portrayed Soviet repression as a “national genocide,” which failed to resonate with the majority of the population. Faced with unprecedented economic and political crises, many Belarusians in 1994–98 viewed the Soviet experience positively: some living standards were better and they felt nostalgic pride in the nation that won the Great Patriotic War. Lukashenka’s government intentionally romanticized the Soviet past.

While it is impossible to predict the most urgent demands of the Belarusian nation when the current political crisis ends, the future government and civil society members should maintain social reconciliation on its agenda.

Reconciliation is a complex, multifaceted, and long-term process that does not have a set formula for success. Like any other divided nation, Belarus will have to find ways to uncover the truth and bring justice to the people, engaging all parts of society—state officials, civil society groups, the media, religious circles, and others. In the end, as much as the state can set a course and regulate the process, the success of reconciliation will depend on individuals and their personal choices. Eventually, every Belarusian will have to choose to peacefully coexist with each other and move the country toward democracy.