Ahead of a Fake Election, Russia Remembers the Murder of a Real Opposition Leader

On Sunday, thousands of people turned out across Russia to commemorate the third anniversary of Boris Nemtsov’s assassination. 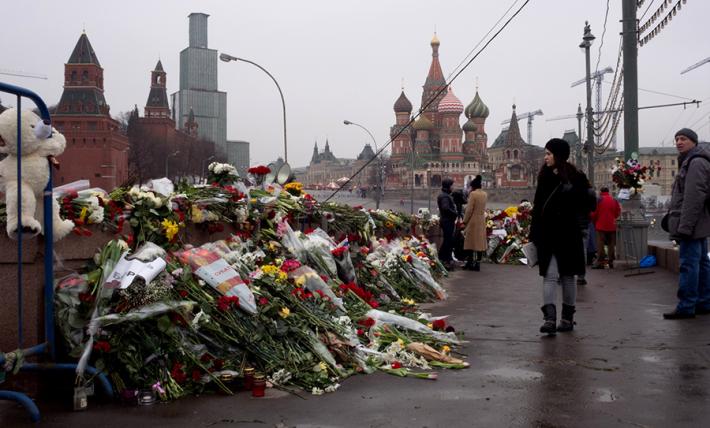 The Bolshoy Moskvoretsky Bridge where Nemstov was killed in central Moscow.

On Sunday, thousands of people turned out across Russia to commemorate the third anniversary of Boris Nemtsov’s assassination.

Shortly after opposition leader Boris Nemtsov was murdered just outside the Kremlin’s walls on February 27, 2015, President Vladimir Putin’s spokesperson, Dmitry Peskov, told a press conference that “in political terms, he did not pose any threat to the current Russian leadership or Vladimir Putin.… Boris Nemtsov was just a little bit more than an average citizen.”

The remark echoed one uttered by Putin himself in 2006, after the assassination of well-known investigative journalist Anna Politkovskaya: “The level of her influence on political life in Russia was utterly insignificant.”

The truth, of course, is that Nemtsov—like Politkovskaya—was a threat to Putin and his cronies, giving them every motive to silence him. His grassroots political activism helped expose the Kremlin’s military intervention in eastern Ukraine, the embezzlement of more than $25 billion during the Sochi Olympics, and large-scale corruption within the powerful state-owned energy company Gazprom. A former deputy prime minister and member of parliament, Nemtsov was a charismatic and talented liberal politician who had long been an implacable foe of Putin’s consolidation of power, and one of the few honest politicians who did not amass wealth while in office.

A pattern of violence and impunity

Nemtsov’s murder was not an isolated incident in Russia. Since Putin’s controversial return to the presidency in 2012 after a stint as prime minister, the Kremlin has amplified its attacks against dissenting voices, creating a hostile atmosphere through restrictive legislation, tighter state control over the media, and crackdowns on civil society and human rights defenders. Many of Putin’s critics have been forced to leave the country or cease their activity.

With recent amendments to legislation governing freedom of assembly, the state has effectively criminalized political dissent, imposing disproportionately harsh fines for participation in unsanctioned protests and prison sentences for event organizers. After nationwide anticorruption protests in March, June, and November 2017, the authorities detained hundreds of protesters, imposing fines, jail terms, and community work. Critics are also routinely accused of “extremism,” a blanket term that can be applied arbitrarily to stifle and punish unwelcome speech, much like Soviet-era practices in which dissidents were labeled “enemies of the people.”

Meanwhile, the Kremlin’s propaganda machine has vilified civil society and demonized the opposition, presenting them as a pro-Western fifth column working to destroy Russia from within. The country’s beleaguered independent media lack the means and reach to counter the state’s ubiquitous narrative, allowing smears of political activists and human rights defenders to go largely unchallenged.

In this climate of hostility, violent attacks against the targets of such media campaigns are greeted with indifference by the authorities. More often than not, law enforcement officials blame the violence on personal grievances and downplay the likelihood of a political motive.

Among other assaults over the past year, opposition activist Ivan Skripnichenko died in a hospital in August after being attacked while guarding a makeshift memorial at the site of Nemtsov’s murder on the Bolshoy Moskvoretsky Bridge. In September, Nikolay Lyaskin, head of opposition leader Aleksey Navalny’s presidential campaign in Moscow, was assaulted with a metal bar. In December, environmental activist Andrey Rudomakha was severely beaten in Krasnodar. Unknown assailants brutally killed the St. Petersburg activist Konstantin Sinitsyn, a regular participant in prodemocracy and anticorruption demonstrations, in January of this year. A month later, Open Russia activist Oleg Maksakov was beaten outside his house in St. Petersburg. And the list goes on.

A ‘popular’ leader who rules by force

Nemtsov’s case underscores the fact that Putin, who supposedly receives high approval ratings in Russian opinion polls, has built a regime that relies at least in part on violence to stay in power. The men officially convicted of the 2015 murder have direct links to the security forces controlled by Chechen leader Ramzan Kadyrov. An avowed Putin loyalist, Kadyrov rules his North Caucasus republic as a criminal state with seeming impunity, endorsing attacks against prodemocracy activists and human rights defenders.

The relationship between the two men has proven mutually beneficial. Kadyrov maintains a form of stability in Chechnya, something that eluded Putin’s predecessor Boris Yeltsin, and in return he is given carte blanche within his domain. Most recently in January, the head of the human rights organization Memorial’s office in Grozny, Oyub Titiyev, was sentenced to prison on fabricated charges, and the group’s office in neighboring Ingushetia was torched; Titiyev’s house in Kurchaloy was suddenly included in a land grab by the local administration to build a shopping center. Whether Putin approves of Kadyrov’s actions or not, he certainly tolerates them.

Nemtsov’s murder was neither the beginning nor the end of this sort of violence. It does not matter whether you are an opposition politician, a journalist, or an environmental advocate; whether you are in Moscow or in Siberia; whether you are a prominent human rights defender or an unknown local activist. If you challenge their rule, they will come for you.

Ahead of the farcical presidential election on March 18, from which all viable opposition candidates have already been excluded, Nemtsov’s murder reminds us that advocating for reform under Putin is both a dangerous and a necessary enterprise. Nemtsov was an outspoken and fierce critic of Putin’s leadership—he persevered in his quest to reform Russia and exposed the Kremlin’s lies, paying the price with his life. But his legacy lives on in today’s democracy activists, who deserve more international support. The world’s democratic powers, particularly the United States and the European Union, cannot remain silent while Putin curbs fundamental freedoms and cracks down on even the slightest attempt at dissent.