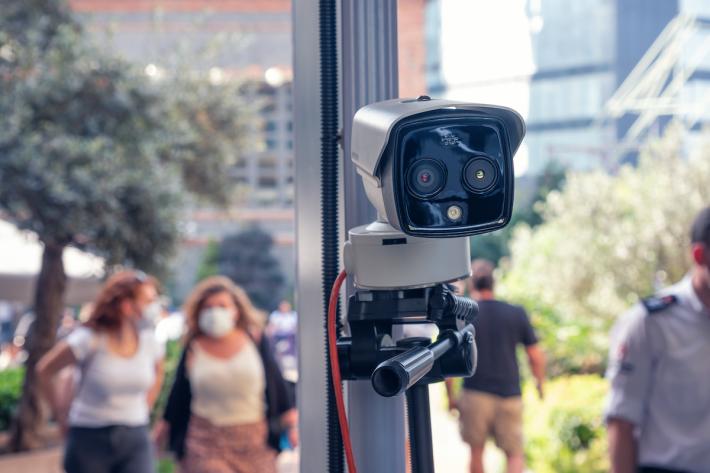 A thermal imaging camera stands at the entrance of an outdoor mall in Turkey to check the temperatures of visitors. Image credit: Cem Selvi via Shutterstock

Internet freedom is under continued and renewed assault in the Middle East and North Africa. As people around the world increasingly rely on digital communication, especially as the COVID-19 pandemic accelerates a transition to remote working, regional governments have relied on their old authoritarian playbooks to restrict these newer spaces. While this phenomenon is not new, authorities have used the pandemic as an excuse to double down on restrictive policies, issuing harsh penalties for journalists and activists and heightening surveillance.

Critical speech and activism moved online as internet access expanded in the 1990s, with governments playing catch up to take control of digital spaces ever since. In a sign of regional governments’ present-day prowess, users have seen content removed and have lost access to websites, all while facing arrests, widespread surveillance, and new laws that restrict internet freedom under the cover of COVID-19.

Here, we highlight the abusive trends that restrict digital freedom for the region’s netizens, and provide recommendations for how governments, private companies, and civil society should protect internet freedom amidst the uncertainty of the COVID-19 pandemic.

The Shadow of COVID-19: Rights-Based Restrictions

Under the guise of protecting public health and controlling misinformation, several governments have used the pandemic as an excuse to propose and implement laws aimed at silencing online speech and activism. Bahrain, Egypt, Iran, Kuwait, Morocco, Saudi Arabia, Tunisia, and the UAE have all introduced overly broad and vaguely written laws; they are ostensibly meant to stem the onslaught of COVID-19-related “fake news,” but have grave implications for all online speech and activism.

These laws have already silenced a wide swath of critical voices, including journalists, doctors, and bloggers voicing concern over their governments’ handling of the crisis. Turkish authorities arrested over 400 people for publishing social media posts about COVID-19 by late March, as the virus only began to spread there. In Egypt, at least two critical websites were blocked over their reporting on human rights abuses in prisons amidst the pandemic.

Civil society has successfully pushed back against some of these attempts, blocking the passage of “fake news” laws in Morocco and Tunisia proposed during the pandemic. While it is imperative that people have access to accurate COVID-19 information, laws that criminalize the dissemination of “misinformation” can easily be manipulated by governments to stifle press outlets, activists, and health-care professionals.

In much of the region, netizens know they live under a veil of surveillance. Online surveillance is rampant, with Saudi Arabia leading the pack in privacy abuses. The COVID-19 pandemic has provided some governments an excuse to expand their reach, monitoring netizens through COVID-19 tracking apps that have been released in the last few months. Bahrain, Kuwait, Turkey, and Saudi Arabia have introduced such apps since the crisis began.

Take Bahrain’s BeAware app, which is mandatory for individuals who test positive for COVID-19. Users must wear Bluetooth-connected bracelets that send alerts if they venture too far from their mobile phones. On top of this, users must take selfies and upload them through BeAware to prove they are isolating at home. All data gathered by BeAware is saved on government servers rather than on users’ devices. All this takes place in a country with a poor record of internet freedom, where authorities regularly employ spyware against dissidents and surveil ordinary internet users.

To ensure that data collected by these apps are not abused, surveillance apps must be open-source and opt-in, and personal data should be stored on individual users’ devices, not on government servers. Public authorities and private companies alike should refrain from capitalizing on the ongoing crisis, and institute safeguards for all types of contact-tracing apps. Private companies that create and sell surveillance software must not sell their products to governments with records of spying or human rights abuses.

New Front in an Old War for Individual Freedom

In the world’s freest societies, restrictions like these would cause consternation and spark distress, even if they are deployed in response to a dangerous pandemic. The Middle East and North Africa region, by comparison, was one of the world’s most restrictive in terms of digital freedom even before the pandemic took hold. Residents in 10 of the 12 Middle Eastern and North African countries covered in our Freedom on the Net 2020 report faced arrest and detention for voicing their online opinions, with the report featuring a litany of recent nonpandemic-related rights abuses. An exiled Egyptian human rights defender received a long in-absentia prison sentence in 2019 and only learned of his verdict this March, for example. In August, a married Iranian couple, also in exile, received prison sentences for their Instagram content. In one of the year’s most extreme examples, an Iranian administrator of a Telegram-based news channel received the death penalty in June and was hanged in December.

Citizens throughout the region persisted in the face of these abuses, however, taking to the streets to oppose public corruption and mismanagement and using online tools to organize their real-world protests. The massive protests held in Iran last November, in response to a 50 percent increase in fuel prices, are a strong show of the public’s long-standing willingness to express their opinions online and offline.

Their government’s response also serves as an example of regional authorities’ ongoing willingness to quash the rights to assemble, associate, and organize, even before the COVID-19 pandemic. As Iranian security forces launched a violent response, authorities elected to shut internet access. Even by the standards of Iran’s already-restrictive environment, this was unprecedented: a near-total blanket shutdown left Iranians across the country without access to the global internet, social media platforms, or communications apps. Not only did this inhibit netizens who tried to organize, but it stopped Iranians from connecting to friends and loved ones who may have been ensnared in the violent crackdown.

Other countries in the region have taken slightly less draconian approaches, yet still have sought to quell civil unrest by limiting access to popular social media and communications platforms this year. Over the summer, Jordanian authorities throttled Facebook Live amidst massive strikes by the country’s teacher’s union. In September, as antigovernment protests swept Egypt, authorities limited access to WhatsApp, which was used by activists and human rights defenders to coordinate and organize protests.

Protecting Internet Freedom, Before, During, And After the Pandemic

The COVID-19 pandemic has cast a long shadow across the region’s digital environment, as authorities use the crisis to continue their long-standing policy of repression against activists, journalists, and ordinary netizens, all the while trying to exert greater control over digital communications.

And yet, their impulse to export authoritarian policies online runs counter to individuals’ need for accurate information about the disruptive COVID-19 pandemic. The region’s governments would do better to refrain from censoring their health-care professionals, journalists, and human rights defenders as they try to keep their fellow netizens safe and free. Eventually, the pandemic will subside, but the effects of reactionary censorship, vague cybercrime laws, criminal penalties, and surveillance tools could have consequences that long surpass it.