Appalling ‘Ally’: 8 Reasons Why the Saudi Regime Should Be a Pariah

The following should make friends and allies of Saudi Arabia, including the United States, question their embrace of such a brutally repressive government. 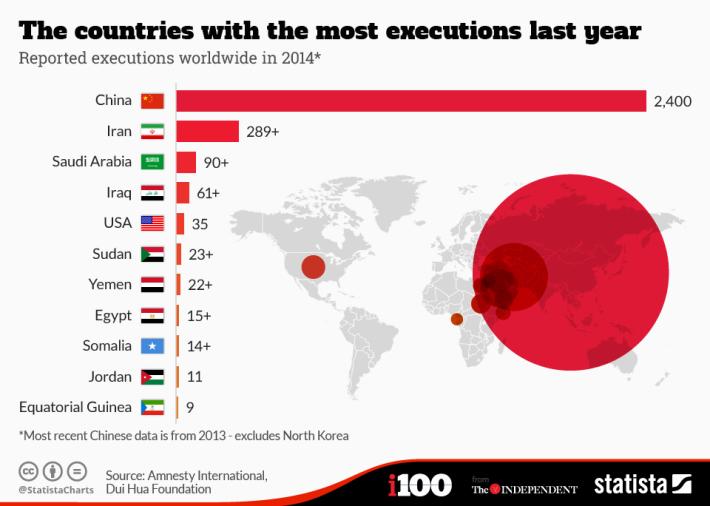 The following should make friends and allies of Saudi Arabia, including the United States, question their embrace of such a brutally repressive government. 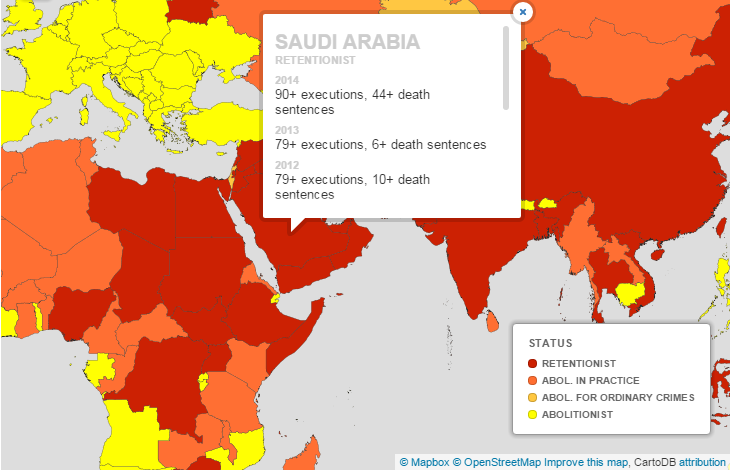 1. Numerous, unjust executions, including of juvenile offenders
According to an August report by Amnesty International, Saudi Arabia has put one person to death every two days on average in 2015, making it one of the world’s top executioners. Trials fall well short of international standards for due process, and the death penalty can be imposed for a range of crimes other than murder, including nonviolent offenses.

International attention has recently focused on the case of Ali Mohammed Baqir al-Nimr, who was arrested in 2012 at age 17 for participating in a pro-Shia protest. He was sentenced to death in May 2014 and is set to be beheaded and crucified, having exhausted his appeals. According to the British legal aid group Reprieve, Ali Mohammad confessed under torture and was denied regular access to a lawyer, who in turn was unable to cross-examine witnesses.

2. Discrimination against Shia Muslims
The Sunni-dominated Saudi regime has a long history of discriminating against the kingdom’s Shia Muslim minority. From economic marginalization to sanctioned killing, the government’s actions toward nearly five million of its own citizens are patently unacceptable.

3. Consistent denial of women’s rights
Despite assertions that the late King Abdullah was a “reformer,” few of his meager promises to women have come to fruition so far. Women activists who campaigned merely for the right to drive were recently jailed for over two months. Four of Abdullah’s own daughters have allegedly been locked up for 14 years, and claim that their confinement is in part retribution for their support for women’s rights and other reforms.

4. Rejection of genuine suffrage for both men and women
Saudi women finally joined men this year in gaining the right to vote in municipal elections, scheduled for December, but this achievement is largely empty in a society where any form of public dissent is illegal. Moreover, the municipal councils have little power, and a third of their members will still be appointed rather than elected. Saudi Arabia remains one of the few countries in the world with no elections of any kind at the national level.

5. Bogus ‘antiterrorism’ laws and utter lack of freedom of expression
A new law supposedly designed to combat terrorism took effect in 2014, reinforcing Saudi Arabia’s already harsh laws against free expression. Essentially any form of dissent, including criticism of the government or its understanding of Islam, now falls under the definition of terrorism, and those convicted will face up to 20 years in prison.

6. Exploitation of migrant workers
Foreign workers make up as much as a third of the Saudi population, but their abuse is almost entirely ignored in the kingdom. No labor laws exist to protect these vulnerable people. Common forms of mistreatment by employers include extremely long working hours, the withholding of wages for months or years, forced and long-term confinement, food deprivation, and severe psychological, physical, and sexual abuse. Saudi Arabia’s malign apathy toward the problem has scarcely changed in the seven years since I paid a diplomatic visit to the kingdom as U.S. Ambassador-at-Large to Combat Trafficking in Persons.

7. Assistance to Bahrain in crushing prodemocracy protests
In March 2011, columns of Saudi troops entered Bahrain to backstop the fellow Sunni monarchy’s effort to quell a popular uprising that may have been, on a per capita basis, the most broadly supported prodemocracy movement of the Arab Spring. The continued presence of Saudi forces in the country underscores the weakness of the Bahraini regime’s grip on power.

8. Devastating military campaign in Yemen
The current war in Yemen is the most acutely destructive manifestation of the Saudi regime’s disregard for basic human rights. Besides the massive humanitarian crisis caused by the Saudi blockade of Yemen’s ports, through which Yemenis receive 90 percent of their food and fuel, Saudi-led airstrikes have taken a terrible toll on Yemeni civilians. In early September, King Salman reportedly pledged to ensure “unfettered access to all forms of humanitarian assistance, including fuel, into Yemen, and to work towards the opening of all Red Sea ports.” Yet UN spokesperson Farhan Haq stated on October 12 that “only 1 percent of the monthly requirements for commercial fuel for Yemen were imported through Red Sea ports during September, down from a low of 12 percent in August.”

Saudi Arabia and the conflict’s other combatants must be held accountable for civilian suffering in Yemen, but the United States will also have to own up and explain its support for the Saudi-led campaign, which includes arms sales, intelligence, and logistical assistance.

Indeed, given all of the abuses listed above, it is unclear how a close relationship with the Saudi regime could possibly serve the long-term interests of any democracy, let alone the United States. If the United States, among free countries, does not put its power and credibility behind pluralism and liberties as the basis for dignity, prosperity, and resilient stability, who will?