Are Brazilians Ready to Bet on Bolsonaro?

The right-wing candidate may well win the election, but his ability to govern is far less clear. 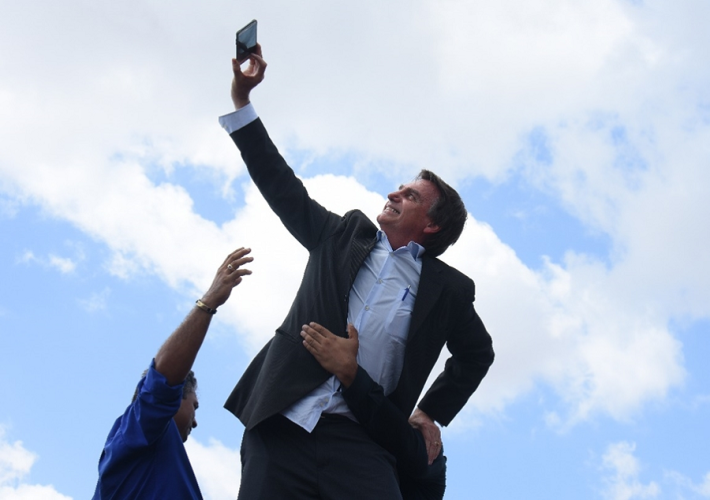 The right-wing candidate may well win the election, but his ability to govern is far less clear.

Jair Bolsonaro, a far-right populist who has praised dictatorship and torture, is poised to win Brazil’s presidency in a runoff vote on Sunday, October 28. His campaign—steeped in nationalism, racism, misogyny, violence, and disdain for basic democratic principles—has drawn shockingly high levels of support from the Brazilian people. But if he takes office as expected in January 2019, he will confront a complex political, social, and economic reality that could weaken his presidency and hamper any dramatic efforts to dismantle democracy.

Sweeping corruption scandals involving all major political parties have battered Brazil and landed two former presidents in jail. Bolsonaro’s runoff opponent, Fernando Haddad of the left-leaning Workers Party (PT), trails by 17 points in recent polls and has struggled to overcome his party’s associations with corruption and a crippling economic recession, from which the country is still recovering.

Brazil faces soaring rates of violent crime—with more than 60,000 homicides in 2017—as well as a budget deficit exceeding 8 percent of gross domestic product, stagnant growth, and rising national debt. In 2018, the World Bank ranked its business climate at 125 out of 190 countries. Environmental concerns with global impact also loom.

Against this backdrop, Brazilians went to the first-round polls on October 7 seeking radical change. In the Senate, only 8 of the 33 incumbents were reelected, and a record 21 parties will now hold Senate seats. The Chamber of Deputies saw 54 percent turnover—the highest in 24 years. Traditionally dominant parties like the PT and the moderate Brazilian Social Democracy Party (PSDB) lost numerous seats in the chamber, while Bolsonaro’s Social Liberal Party (PSL) won 48, up from just 4 before the elections.

Running against the system

With a savvy social media campaign and unsparing rhetoric, Bolsonaro has embodied voters’ rejection of the status quo. His overt antipathy toward democracy and aggressive pledges to end corruption and violent crime resonate with an electorate that is deeply frustrated with politics and ranks insecurity as a top concern. According to a 2017 Pew Research Center poll, only 8 percent of citizens view representative democracy as a “very good” form of government.

On crime, Bolsonaro espouses violent retribution. He has suggested giving more leeway and more arms to security forces, called for relaxing restrictions on private gun ownership, and endorsed torture and execution for suspected criminals. In a country where police killed some 9,000 people last year alone, encouraging more expansive use of violence by law enforcement agencies is an alarming proposition.

A migration crisis stemming from the deteriorating living conditions in Venezuela has compounded security and economic concerns. Tens of thousands of Venezuelans flee their country each month, and as many as 900 migrants cross into Brazil each day, by some accounts. To address this, Bolsonaro has advocated a tougher immigration and border policy that would include confining Venezuelan migrants to refugee camps.

Despite vacillating views on economic issues, Bolsonaro has won at least temporary support from Brazil’s major business organizations, which are concerned about possible socialist polices under a Haddad presidency. Bolsonaro appealed to agribusiness and mining interests by promising to loosen or jettison legal and regulatory restrictions on exploitation of the world’s largest tropical rainforests. He has also asserted that Brazil will pull out of the 2016 Paris climate accord. These proposals not only jeopardize global efforts to mitigate climate change, but also undermine the rights of indigenous and other marginalized communities that live in the affected areas.

Bolsonaro has garnered support from increasingly influential Evangelical Christians with his displays of hard-line social conservatism, calls for an end to “leftist ideas” like sex education in schools, and derision of LGBT (lesbian, gay, bisexual, and transgender) people and their rights. He has expressed similar contempt for other vulnerable groups, including women and nonwhites, making offhand comments about rape and publicly disparaging Brazil’s indigenous population.

Governing without a system?

While his inflammatory campaign has been enormously successful, it is unclear what a Bolsonaro government would look like. He has no previous executive experience and no powerful political machine—civilian or military—to support him. Bolsonaro’s ability to enact any of the proposals he has put forth will depend on his skill at forging political coalitions in what promises to be a deeply fractured Congress. The October 7 elections gave the PSL the second-largest share of seats in the Chamber of Deputies, behind only the PT, but this represents just 10 percent of the total, which is split among 30 parties.

Bolsonaro has already rejected traditional political coalitions, saying that to depoliticize senior government roles and root out corruption, he will fill cabinet posts with technocrats and retired generals. He has also promised to slash the number of ministries. While he could garner support from powerful state governors if PSL candidates win in the second round, the party has not yet won any governorships.

Even Bolsonaro’s support from sympathetic groups like the business sector could erode once his ambiguous economic proposals take shape. For instance, he and his pick for finance minister, Paulo Guedes, have expressed contradictory views on privatization—a sensitive topic in Brazil, which has maintained a largely statist economic model for decades but needs significant change to reinvigorate the economy.

Bolsonaro’s veneration for the military has stoked concerns that he will use force to erode democratic institutions if he faces resistance. However, while he has surrounded himself with a number of retired officers, he is unpopular in the upper echelons of the active military. Moreover, since the country’s transition to democracy in the 1980s, the military has maintained a significant distance from politics and governance.

In spite of a popular mandate, Bolsonaro will also likely encounter resistance to his policies from recently empowered social groups. Both women and nonwhites hold demographic majorities in Brazil and have made gains with respect to rights and representation. Former PT president Luiz Inácio Lula da Silva, who remains popular despite a corruption conviction, implemented policies to address inequality, such as affirmative action in Brazilian universities, and new race-based political movements have arisen. In the October 7 congressional elections, women improved their representation from 10 to a record 15 percent.

Bolsonaro’s campaign has relied in large part on frothy demagoguery, riding a tide of public frustration with the existing political class and their failure to address pressing governance problems. But that same tide could quickly overwhelm him if he is not prepared to navigate Brazil’s fractured political system and meet the demands of a diverse and energized electorate once in office.

What happens in Brazil, the world’s fifth-largest country, will have implications beyond its borders. Over the past two decades, it had emerged as a regional leader on democracy, often working with bodies like the Organization of American States and other governments to address political crises and bolster democratic principles. While this role has faded amid corruption scandals and a presidential impeachment saga in 2016, Brazil remains an influential force in Latin America, and its neighbors will watch closely to see how its democracy weathers a Bolsonaro administration.