The chief executive of Grupo Clarín discusses the future of independent journalism in a changing environment. 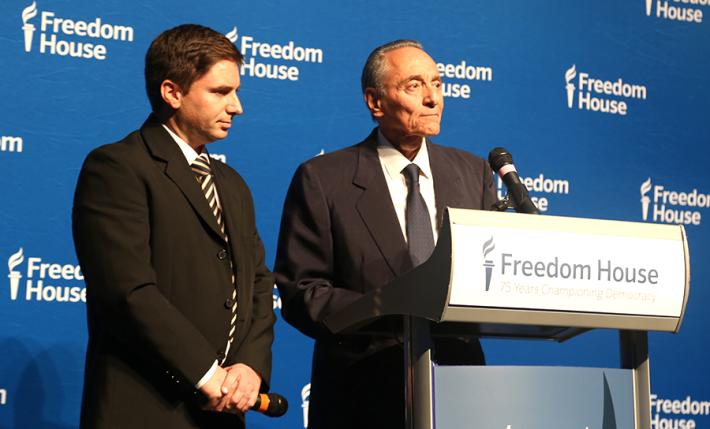 Héctor Magnetto, CEO of Grupo Clarin and winner of the 2016 Freedom of Expression Award (right).

Héctor Magnetto, recipient of Freedom House’s 2016 Freedom of Expression Award, is chief executive of Grupo Clarín, the largest media group in Argentina and publisher of the respected daily Clarín, among other titles. Magnetto spoke with Freedom House about press freedom issues in Latin America.

Freedom House: Since Mauricio Macri became president of Argentina in December, succeeding Cristina Fernández de Kirchner, have the previous government’s restrictive policies toward the media been reversed? Or has the new government decided that perhaps some of the restrictions were good ideas after all?

Magnetto: The new government has brought a radical transformation. There has been a large change, which has returned our situation to normal. The change in political attitudes toward the press is very clear to everyone.

Can the country “embed” these changes in a way that they can’t be reversed by the next government or the one after that?

It’s difficult to do that, especially if those in government turn out to be ill-intentioned about their use of discretionary powers. There were not only specific measures against freedom of speech by the previous government but also twisted interpretations by government agencies and other branches of government.

When you look elsewhere in the region—to Brazil, Bolivia, Venezuela—do you think there can be the same kind of improvement?

In Brazil, the Workers’ Party did not have the opportunity to do what the Kirchner administration did in Argentina. One reason is that in Brazil, power is distributed differently, with a better balance between the branches of government. I think that difference was critical in preserving greater press freedoms there.

In Venezuela and Bolivia, power is far more concentrated. The greater the concentration, the easier it is to take steps against freedom of speech. Many populist governments rely on using two tools together to get their way—constitutional reforms and reforms of the judiciary—and use them to reduce free expression. The “reforms” are used to attack the credibility of journalists and also the economic foundations of media companies.

How can media companies deal with the economic changes brought about by the digital world and changes in the model for advertising? How do you protect press freedom if the economic foundation for journalism disappears?

It’s a difficult problem to solve. Technological changes, as we know, are also leading to changes in social customs. They affect the economic basis of our business, of all media companies, especially those selling newspapers and magazines. We haven’t yet found a new business strategy that could substitute for the one we’ve had the last 15, 20 years. The media will have to transform itself in the digital era, but it’s not yet clear what’s going to be the economic foundation, unfortunately. This is going to be a challenge for democracy in the next few years.

Has the work of any particular company impressed you and seemed to show a way forward?

Every outlet is different. A lot depends on geography. In Argentina, cable TV is at a peak that I think will continue for some years; it’s going to be able to maintain its market share. The same goes for [over-the-air] television. Print media is the part of the industry that faces the biggest problems. We’re seeing enormous transformations to move toward digital, because that’s where the readers will be. Clarín now has more readers than 10 years ago, if we combine print plus digital. But the profitability of print and digital are totally different. The question is whether and how we’re going to be able to charge for digital content. We’re watching how the New York Times does with this. I personally have my doubts that its model will work.

How can societies teach new generations that press freedom remains a building block of democracy?

It depends largely on how political life is organized within a country. Press freedom rests on the principles and values of Western political life. It depends not only on the public but on leaders. We have to find the economic formula to maintain newsroom staffs. That’s fundamental for keeping journalism alive. Journalism requires journalists. And journalists need to collect a salary. Solving this is the key problem for all of us.

Freedom of speech depends on having a republican political system. This freedom is a product of Western governance, where there is a balance of power. Without it, these freedoms are not feasible.