Armed Standoff in Armenia: Why It Happened and What It Could Mean

The two-week occupation of a police station that ended on Sunday drew unexpected public support, raising questions about the country’s future stability. 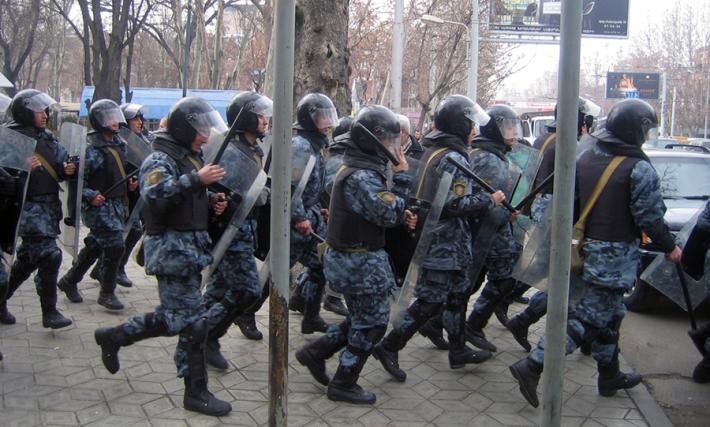 The two-week occupation of a police station that ended on Sunday drew unexpected public support, raising questions about the country’s future stability.

When a group of gunmen seized a police station in Yerevan on July 17 and issued antigovernment demands, they were initially met with bewilderment from the public and silence from major regime and opposition figures.

The men called for the release of political prisoners, the resignation of the president, and public protests. Silence on the part of state media and the president persisted for several days after the takeover, but the group surprisingly found support among the public. Thousands of demonstrators eventually gathered in the capital and elicited a predictably brutal response from the police.

The armed group’s drastic attempts to change the status quo in Armenia can only be understood in the context of the government’s authoritarian tendencies when it comes to independent activism, and the sense of hopelessness that they have engendered. While expressions of antigovernment sentiment have been largely peaceful in recent years, the incidents of the past two weeks signal a disturbing escalation in both the expectations of and constraints on the disenchanted Armenian public.

The militants—veterans of the 1988–94 territorial conflict between Armenia and Azerbaijan—call themselves the Daredevils of Sassoun in reference to a folk epic about heroic Armenian warriors. They have ties to the so-called Founding Parliament, a small antiestablishment movement that demands the resignation of the government, which it finds corrupt and abusive.

In June, police arrested the movement’s leader, Zhirayr Sefilyan, and several others for allegedly possessing illegal weapons and plotting a coup; the detainees’ release was among the demands of the gunmen. By most accounts, although its criticisms of the regime are echoed by many opposition supporters, the Founding Parliament enjoys little public support and remains on the margins of Armenia’s political arena.

This relative obscurity underscores the significance of the protests supporting the armed militants who seized the police station. Furthermore, the men’s surrender on July 31—which they said was in the interest of preventing further bloodshed—could ultimately enhance their public support, as the militants are now in the hands of Armenia’s notoriously abusive justice system.

When Serzh Sargsyan came to power in 2008, he inherited a presidency backed by a group of entrenched oligarchs who controlled virtually every sector of the economy. He also ushered in a new, more authoritarian political atmosphere: That year’s disputed election results triggered mass protests, and a violent security response led to the deaths of 10 people as well as countless injuries and the detention of more than 100 participants. Although the country’s 2013 presidential election did not lead to similar violence, grave electoral violations and widespread complaints about corruption further disheartened the public.

In recent years, the country has witnessed an extraordinary level of civic activism through peaceful demonstrations and sit-ins, including actions against Armenia’s inclusion in the Russia-led Eurasian Economic Union, controversial pension reforms, increases in public transportation fares and electricity prices, and proposed constitutional changes.

None of these events featured support for violence, and few participants called for a drastic change in the system of government. The regime, however, routinely responded with a heavy police presence and, more often than not, a brutal dispersal of participants.

Coupled with their unwillingness to meaningfully address the grievances of demonstrators, the authorities’ record of violent overreaction to civic activism has caused many citizens to lose hope in the idea of accessing justice and holding their leaders accountable through lawful, democratic means. The armed occupation of the police station, a startling disruption of Armenia’s static political scene, was seen in some quarters as a last resort and, for those who took to the streets in protest, as a wake-up call.

While the leaders of the takeover asserted that they would continue their battle behind bars, the effects of the gunmen’s actions will extend far beyond their original aims.

The government response, limited to condemning the men as terrorists and suppressing their supporters, has failed to acknowledge the uncomfortable reality that the Armenian public sympathizes with many of the complaints and criticisms at the heart of the takeover.

Before July 17, many would have considered violence to be an unlikely course of action for antigovernment forces in Armenia. The surprising public reaction to the takeover, however, has unhinged expectations about what is permissible in the realm of antigovernment mobilization.

In light of the authorities’ demonstrated commitment to meeting even peaceful activism with excessive force, this is a dangerous new reality for Armenian politics.