Freedom House and the Union of Informed Citizens hosted the Armenian Forum for Democracy in Yerevan, where a diverse group of stakeholders met to discuss their efforts as well as ongoing challenges. 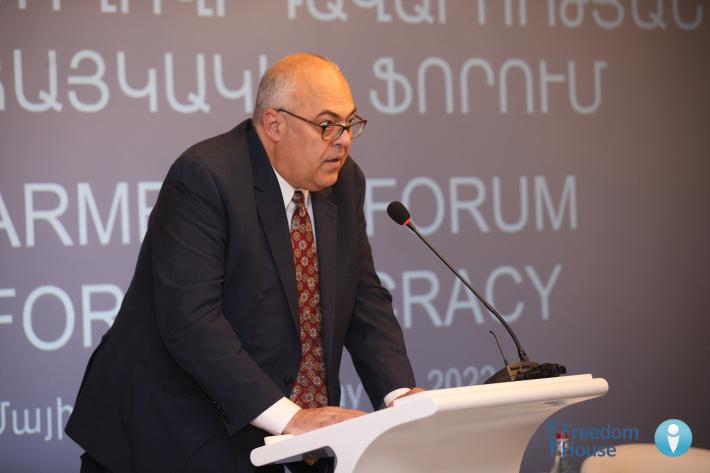 Marc Behrendt, director of Europe and Eurasia programs at Freedom House, speaks at the Armenian Forum for Democracy in Yerevan, Armenia.

On May 20, Freedom House and the Union of Informed Citizens, our local partner organization, jointly hosted the Armenian Forum for Democracy in Yerevan. A diverse group of stakeholders—including Armenian legislators, government officials, ambassadors, and members of Armenian and global civil society—met to discuss their efforts as well as ongoing challenges.

Attendees were welcomed with opening remarks from Armenian prime minister Nikol Pashinyan as well as from Ambassador Andrea Wiktorin, head of the European Union’s delegation to Armenia, and Marc Behrendt, director for Europe and Eurasia programs at Freedom House. In his opening remarks, Prime Minister Pashinyan stated, “Today, the citizen is the key guarantor of the democracy of the Republic of Armenia… the citizen of the Republic of Armenia knows that he is a decision-maker—he is the main and core decision-making subject, as envisaged by the constitution of the Republic of Armenia.” In his speech, Pashinyan advocated for the continued consolidation of democratic rule, calling democracy the key mechanism guaranteeing Armenia’s sovereignty and independence.

In her remarks, Ambassador Wiktorin noted that after a period of democratization around the world, many democracies appear to be backsliding. Wiktorin said, “Armenia as well, has faced major challenges such as the COVID-19 pandemic, the 44-day war [in Nagorno-Karabakh], and the postwar situation and most recently, the impact of Russia’s war in Ukraine,” but also noted the country’s success in preserving key freedoms despite these challenges.

Behrendt, meanwhile, noted Armenia’s progress in democratization and human rights despite a turbulent geopolitical environment, citing Freedom House’s reports. “At the same time, we raised concern about the criminalization of insults that could seriously threaten the freedom of expression in Armenia,” Behrendt added.