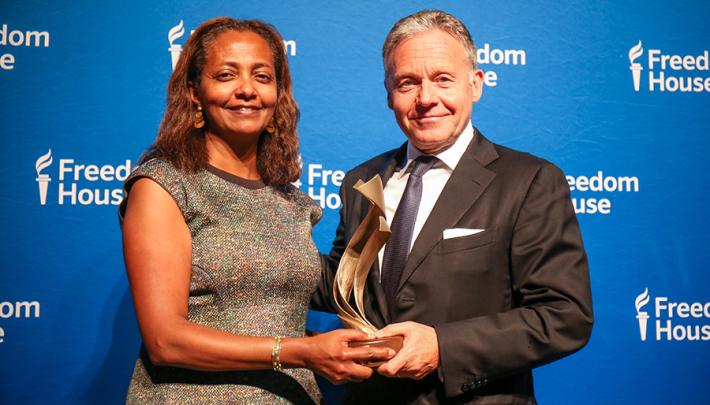 Freedom House: Having a strong, independent press almost always requires having a reliable financial model. What will be the economic basis for digital media?

Büchi: There are several possibilities for creating revenue. What we see now is that many media companies still rely too much on just one source of revenue, which is advertising. But in the past couple of years the advertising world has changed fundamentally. Now every website can offer you reach and audience. So we’ve lost that exclusivity of reach. Today we should aim to offer smart reach, with more emphasis on quality—quality of the content environment, greater engagement of the user.

And we absolutely need to build up additional revenue streams and to be paid directly by the user for what he is reading. That means offering paid-content models—subscription-based models or sales based on a single article. We have to rebuild this revenue stream, which in the early years of the internet was given away by publishers in an irresponsible way, as we can see today.

Let me give you an example: We are running bild.de, the leading news site in Germany, the news site of Europe’s biggest tabloid newspaper, Bild. Three years ago we introduced a subscription model online. This was very ambitious, as Bild always depended on newsstand sales; there were only few subscriptions for the print edition. But now we have 360,000 paid subscribers for the website. So don’t tell me there’s no business model, or no opportunity to rebuild the revenue stream with the users.

The other step is to create new revenue streams. We have to become more creative to find new possibilities of earning money with our core business, which is journalism, without giving up the independence of our journalists.

Those seem like luxurious ideas for some areas where your company operates—Poland, Hungary, the Balkans—or a country Axel Springer decided to leave, Russia.

Let’s draw a line between Russia and other Central European countries. In Russia it has become impossible for an international media company to run a reasonable media business. Putin and his government put in place a media law that limits international companies to owning no more than 20 percent of local firms. Being a minority stakeholder in Russia with 20 percent and an 80 percent majority Russian owner is not a pleasant thing if you want to run an independent and professional news or political magazine. So for us it was absolutely clear when that happened that we would pull out of Russia. We wouldn’t have been able any more to offer independent quality journalism in our market-leading magazine, Forbes Russia.

In some other Eastern European countries, we are seeing a polarization of the political landscape where the more nationalistic parties and politicians of the right have gained ground. But let’s open our eyes about it. That’s something we observe not only in Central Europe. We observe it everywhere in Europe, and even in the United States.

We also shouldn’t forget that these CEE [Central and Eastern Europe] countries are relatively young democracies, just a bit more than 25 years old. The political landscape is still evolving. We shouldn’t compare what is going on today in Russia or in Turkey, where we really have to deal with autocratic systems, and the developments we see in other countries, like Poland or Hungary.

These are governments that have been elected in a democratic way. We also have to consider that as a private media company—and we are present in Poland, Hungary, Serbia, and Slovakia—you can be there, active as an independent and free media company. We did not and we do not experience any concrete restrictions from the governments. And we wouldn’t accept them.

Have your colleagues at Axel Springer drawn any lessons from the coverage of immigration issues in Germany and elsewhere in Europe?

Let me underline an important principle of how we understand journalism: We do not have a corporate policy on how to report on the refugee issue. The editorial team decides for their respective newspaper, magazine, or website how and what they will write. That’s principle No. 1, and it’s true in Germany and in all the other countries where we work.

Personally, I’ve been impressed by the emotional side of the reporting. Even in well-to-do European countries, our editorial teams pushed to see the human drama behind the refugee crisis—not just questions about the economics of how we will absorb all of the new arrivals. Our first reaction was to show empathy.

Naturally, we also have to consider the political impact. We see the polarization in politics as in part a result of uncertainty and of a certain fear in the population—an existential fear—about handling this challenge if we already have high unemployment rates, if we don’t know how to fund our pensions. If we don’t find answers, we will see further polarization, and history shows this is not something we should wish for ourselves. As journalists, we have to consider all of that in our reporting.

There was perhaps a certain misunderstanding in Western Europe about Eastern European countries like Hungary, the Czech Republic, or Slovakia, which partly closed their borders. But if you know that the average salary in these countries is about 500 euros a month, you better understand the existential fears in these young democracies and young economies and of people who are still more or less living on a minimum. We need to have a certain consideration of these fears and not be so arrogant that we fail to understand people who have less.

An issue becoming more urgent is how journalists should report on political figures who say something that is untrue. How does a free press report on lies?

It’s very simple. If you know that it’s a lie, then you should call it a lie. It’s not important who said it. You just have to call it a lie. Just stick to the facts. That’s all I can say. Stick to the truth, as long as you’re sure it is the truth.