Azerbaijan’s Khadija Ismayilova on Fighting Injustice and Corruption, and How the World Can Help

The acclaimed investigative journalist spoke with Freedom House after her recent release from prison, and ahead of a major international sporting event in Baku. 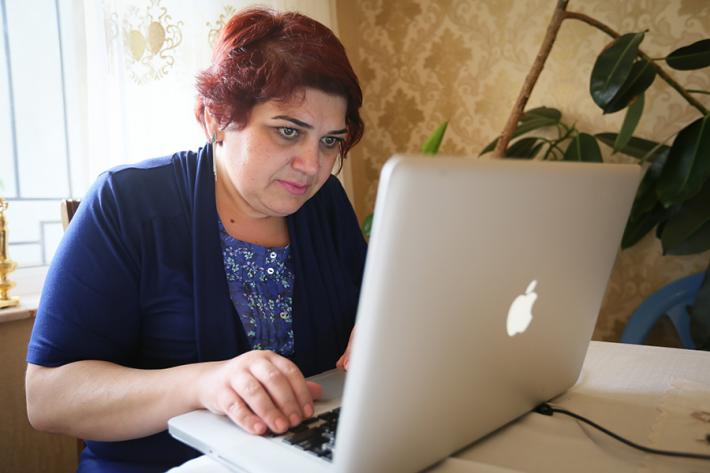 The government of Azerbaijan released investigative journalist Khadija Ismayilova from prison on May 25—583 days after she was jailed on trumped-up charges. She remains confined to Baku, the capital, but has resumed her reporting on corruption involving the family of President Ilham Aliyev. She spoke with Freedom House by telephone.

Freedom House: Why do you think the authorities targeted you for arrest?

Ismayilova: The government wanted to arrest me because it wanted to silence me, to stop my investigations. They wanted to prevent me from advocating for human rights and telling the truth. They put a lot of effort into this venture and brought several cases under different parts of the criminal code.

They finally had to release me because, in all the cases and whatever the charges, it was clear from the beginning that the accusations were false and entirely political. In the last case, the charges were chosen specifically because of the crimes I was actually reporting and writing about, crimes in which my reporting showed involvement by the government. They chose these particular parts of the criminal code—alleging embezzlement and tax evasion—because these were their crimes.

Other activists were arrested at about the same time as you, in December 2014. What was making the government nervous? Why did the government act at that particular time?

It was a long process that started long before the actual crackdown; it came step by step. They spent a lot of money on lobbying, and they put a lot of effort into silencing media, and then decided on a major crackdown to eliminate civil society on an institutional level. They picked the most active and the most dedicated civil society leaders, and arrested them. It wasn’t potential political rivalry that bothered the government. It was civil society’s ability to publish its findings despite all the government efforts. By the time I was arrested, I think they believed this would basically be the end of the problem. But this didn’t happen. There was even more criticism of the government, even more investigations by journalists were published.

I should say that the government felt free to do all of this because it didn’t encounter much criticism from democratic countries. It felt impunity. That’s why they believed they could arrest more people, that they could arrest people who were internationally known, who were basically leaders of civil society in Azerbaijan. Impunity led to the major crackdown. Those who watered down criticism in the Council of Europe, those who continued to shake hands with the dictators—they should feel responsible for this crackdown. I think they should feel responsible for the time I spent in prison.

When you were released, some of the other imprisoned journalists and human rights figures were released at about the same time. Why did this happen?

It happened because of the outside pressures, first of all. The government of Azerbaijan doesn’t like being threatened with sanctions. The call for sanctions came from the United States Congress. I want to say thank you to everyone who is standing behind the Azerbaijan Democracy Act and the Global Magnitsky Act. Even though the legislation has not yet passed, it affects policies here. So did the calls for UNESCO to withdraw the position of goodwill ambassador from Mehriban Aliyeva, the first lady. People don’t like to lose these positions or to lose control of their wealth or to be prevented from going to Western countries and buying certain products, even when corruption at home deprives citizens of being able to afford the same products. These things were really instrumental in getting the government to soften its position.

In my particular case, I think it was important that my colleagues continued their investigation and did even more reporting than I could do in freedom. It showed the government that keeping me in prison was a mistake and didn’t help them achieve their goals. Keeping me in prison didn’t help them. There were even more investigations of the regime. I think this is the key. I think the human rights community should build on these achievements. It has to make sure that it’s too expensive for governments to try to silence civil society.

I want to thank every journalist who carried out investigations while I was away. We want to make sure that the state will be checked.

Baku is hosting a Formula 1 race starting on June 17, at considerable financial expense to the government. Does hosting international sports events “buy” support for the government? Do the events give the government cover for its other actions?

The government doesn’t have the money it used to spend on events like this. It didn’t consider the possibility of the economic crisis that’s now a reality because of the fall in the price of oil. The government is trying to use this event for PR. It wants to keep people busy with a sporting event so that they don’t concentrate on the real problems of the country. That’s why the government wants to host all of these events.

Sporting events are also a source of corruption. For the Formula 1 race, it turns out that a lot of construction has been done by a company owned by the sport minister’s son. So a lot of money is going into ministers’ and officials’ pockets. If there were no room for corruption in organizing these events, the government would be less interested in holding them. The international sports organizations should not be interested in enabling corruption in our country—if, of course, the organizations themselves are not interested in that corruption and they are not part of it. Which I think is a subject for investigation.

One of the biggest problems is corruption. You have to bribe your doctor for good health care. You have to offer bribes to get a good job. Corruption is part of a person’s whole life. It starts from birth and goes all the way to the grave. At the cemetery, you pay bribes to get a piece of land to be buried. Because of corruption, we don’t have fair play in business. We don’t have fair play in any part of life. These are the problems the people of Azerbaijan should concentrate on.

And these problems have become clearer now that there is less money coming from oil. People have to think about how mismanagement and corruption have affected their lives, and why they are poorer, and why the country has wasted so much oil money. I don’t think the government realizes the seriousness of this problem. It still thinks mass events like Formula 1 or Eurovision or entertainment will really help them silence all the critical voices.

Do you believe the ruling family will still be in power five years from now? Is the future going to look like the present?

I think definitely the family will want to be here, although the country is running out of money and that discourages them a little bit. But they want to keep their position. So I think they’ll do their best to continue in office. I’m not sure they will succeed with that, if there is international support for civil society and if civil society can establish itself. We need the help of the world. I mean not just NGOs but international organizations and the world’s democracies.

What would you ask of the United States?

First I would ask the executive to be more public with a call for human rights. So far we haven’t heard strong words from the president or the State Department on human rights issues in Azerbaijan. We haven’t heard them talking with strong voices. Human rights is not a shameful subject that needs to spoken about behind closed doors. The State Department and the White House need to go outdoors with this subject.

In Congress, some voices have been raised for human rights in Azerbaijan. I hope they continue, and sanctions against corrupt officials and oppressive regimes will be really helpful too. The United States needs to make sure that its stand for democracy is understood clearly. So far we haven’t heard much, especially from the executive part of the United States leadership. We want to hear more.

Will you be able to resume your work as a journalist?

I’ve already started. We’ve done some work on a couple of investigations since my release.