His many ribbon-cutting appearances boost his image ahead of an April 11 election. Sort of. 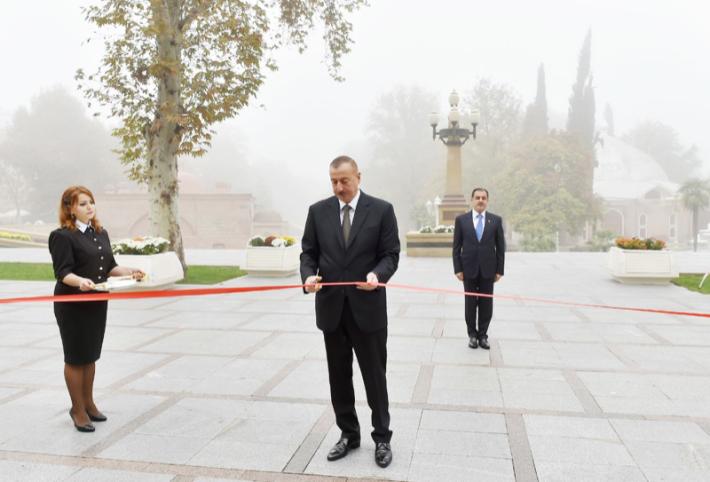 His many ribbon-cutting appearances boost his image ahead of an April 11 election. Sort of.

This week, Azerbaijani president Ilham Aliyev is seeking a fourth term in office, having originally won election in 2003 to succeed his long-ruling father. Thanks to recent constitutional changes, his next stint as president will last for seven years rather than five.

All genuine opposition parties are calling for a boycott or declining to field a candidate, citing Aliyev’s sudden decision to move the election up from October 2018, which gave them little time to prepare. Among other advantages, the incumbent enjoys the support of a biased, state-dominated media sector and a record of jailing or driving into exile his main domestic opponents.

Aliyev largely refrained from direct campaigning in his past elections, but was nevertheless credited with overwhelming victories, taking 84.5 percent of the vote in 2013. This year too he has stayed above the fray, letting a proxy represent him in televised debates.

In truth, though, the president is always campaigning. The media and his own presidential press service constantly trumpet his official activities, which often involve inaugurating new projects and facilities. The idea, apparently, is to present him as a provider for his people, who generally have little access to or interest in the international investigative reports about his family’s epic corruption. Ordinary Azerbaijanis can see that things aren’t going well for them, but the president’s efforts are meant to show that he is a beneficent leader doing his best; any failures can be blamed on weak and venal subordinates.

Aliyev’s frequent ribbon-cutting ceremonies reveal a regime that is simultaneously anxious and complacent—determined to give the president credit for every minor road repair and school building in the country, yet deeply weary and unimaginative after so many years in power. It is just going through the motions, but perhaps it is driven onward by the fear that abandoning the façade entirely would expose an outrageous kleptocracy.