Thousands of Rohingya refugees are denied internet access because Bangladesh requires mobile users to register with their national identity documents. 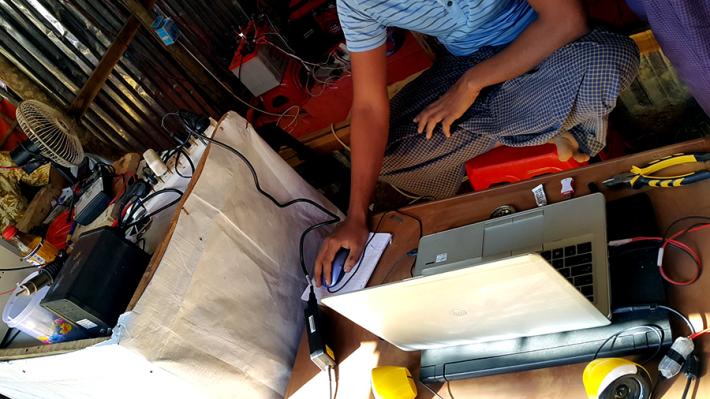 Mobile repair and recharging shop in a Rohingya refugee camp in Bangladesh.

Thousands of Rohingya refugees are denied internet access because Bangladesh requires mobile users to register with their national identity documents.

The Rohingyas are one of the most persecuted populations in the world today. Some 655,000 of them have crossed into Bangladesh from neighboring Myanmar in the past five months to escape systematic violence by Myanmar’s military and local militias. About 400,000 Rohingya refugees were already living in Bangladesh, having arrived over many years beginning in the early 1980s.

Providing care and support for this population is a huge challenge, but the dust from the latest crisis is beginning to settle. Camps that were formed indiscriminately on an emergency basis are becoming more established. The occupants no longer fear for their lives as they did in Myanmar, and a recent visit to one of the refugee camps in the Balukhali area of Cox’s Bazar district showed that important services related to food distribution, emergency health care, and sanitation were being rolled out in a relatively orderly manner, with effective coordination among government entities, international donor agencies, and local nongovernmental organizations (NGOs).

However, lack of internet access threatens to keep an already isolated community of refugees cut off from information and communication technologies (ICTs) that would help them obtain services in Bangladesh and stay in touch with family.

The local mobile voice network around the refugee camps is poor, and internet connectivity is even poorer. Moreover, as refugees without any formal identification documents, Rohingyas are not allowed to access local SIM cards legally. The government has offered them free telephone booths, but hardly anyone uses them.

Instead, “illegal” mobile phone service is the most popular mode of communication. Many Rohingyas have procured Bangladeshi SIM cards through the black market, meaning they pay more than legal users and can’t shop around for affordable packages. Interestingly, Burmese service can still be received in border areas, prompting many refugees to use dual-SIM-enabled phone sets to continue with the service from their country of origin and keep in touch with relatives who remain in Myanmar.

While collecting data on the information needs of the displaced population in one of the refugee camps near Balukhali, my colleagues and I encountered a small makeshift shop on the side of a new road, freshly cut from a small hillock. The owner, Rahim (not his real name), was not selling vegetables, fish, or chickens, though these are all in high demand in the camp. He offers an uploading service to share songs, videos, and other information on devices that are not connected to the internet. Rahim also repairs phones and sells mobile talk time, phone cards, and phone chargers. His shop is powered by car batteries, and device owners can also pay a small fee to charge them, since the camp otherwise lacks electricity.

Business was thriving, and the venture has helped Rahim to earn a living and look toward the future. But he operates under constant fear for himself and his customers, because they’re technically breaking the law. In Bangladesh, an individual must provide official identification documents as well as biometric information to procure a SIM card. Hence the risk of harassment or arrest by law enforcement agencies remains high.

The informal system of SIM access also perpetuates inequality. Rohingya women are worst off when it comes to access to information. Many lack the literacy and social connections to obtain and operate illegal SIM cards, leaving them heavily dependent on their limited social circle for information. In the camps, we observed that Rohingya women were reluctant to avail themselves of many services, in part from fear of social repercussions for outward mobility. That barrier is even higher when it comes to accessing the internet.

Other displaced populations have benefitted from ICTs. Syrian refugees have used several mobile applications to access useful information and resources during their mass migration to Europe and other parts of Middle East, including Refunite, Gherbtna, Tarjemly Live, and Refugermany. Refunite is a web-based platform with the goal of reconnecting dispersed refugee families. Gherbtna, which in Arabic means “loneliness in exile,” is a smartphone-based application offering four types of services: information on asylum procedures, news, job opportunities, and answers to questions on health, education, and legal issues. Tarjemly Live provides real-time human translation in Turkish, Arabic, and English for $0.35 per minute and is very popular among the Syrian refugees staying in Turkey. Refugermany is primarily designed for the refugees in Germany, and provides information on topics such as the asylum process, housing, German language training, health, and employment.

Similar services could help the Rohingyas in Bangladesh, if they were designed to overcome specific challenges. Refugee camps could be connected using local intranets or low-power FMs to protect an already vulnerable population from financial exploitation when seeking mobile service. Apps that share information could combine online and offline components, to make the most of what limited access is available. And digital literacy training could be incorporated as part of outreach to women in the camps.

The aid and digital rights communities should develop an assessment framework to better identify the information and communication needs of the displaced population, which would be applicable in similar refugee crises around the globe. And for the government of Bangladesh, there is an urgent need to facilitate legal, affordable access to SIM cards for the Rohingyas. With the unique identification process already used by the government and different humanitarian agencies to supply a multitude of services, Rohingya refugees can be provided with at least temporary but legal access to SIM cards and other types of connectivity.

The author is an assistant professor in the Department of Technology and Society at State University of New York (SUNY), Korea, and one of founding directors of iDev, an inclusive platform for development research aimed at fostering sustainable growth in the Global South. He has contributed to past Freedom on the Net reports on Bangladesh.

Fieldwork for this article and the overall research on developing an Access to Information Framework for Displaced Populations were conducted with the help of  Imran Chowdhury, Hasib Ahsan, Md. Arifur Rahman, Azmina Karim, and Fabiha Naumi.