Bayard Rustin and the Struggle for Equality 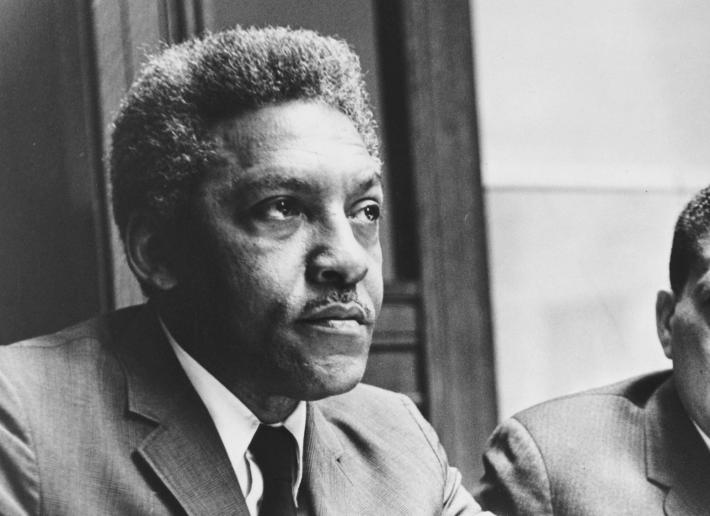 Freedom House is committed to ensuring that the fundamental rights of LGBT+ people are respected around the world, now and into the future. But as this year’s Pride month draws to a close, we are taking a moment to look back at the record of one of our most prominent former trustees, Bayard Rustin. During his long career as a civil rights, labor, and democracy activist, Rustin did not hide his identity as a gay man from his colleagues, and he eventually added public advocacy for the gay community to his other lines of work.

In the interview below, Freedom House’s senior scholar emeritus, Arch Puddington, answers questions about his impressions of Rustin, with whom he worked closely at the A. Philip Randolph Institute beginning in 1971.

You began working for Bayard Rustin in the early 1970s. Was he open about his identity as a gay man at the time?

I worked for Bayard during a period when his base was the A. Philip Randolph Institute, an organization that encouraged Black workers to play a more active role in their unions, and that provided Bayard with a platform from which to comment on political developments and engage in civil rights and human rights projects. The staff knew he was gay, as did the leadership of the civil rights movement and the political and cultural figures who dealt with him. But Bayard was not “open” or “out” in the sense that we understand today. He didn’t discuss his private life with the media or in public.

Is it true that Rustin stepped back from a public role in the 1963 March on Washington because he was worried that his identity as a gay man would negatively affect the movement?

The point here is that Bayard’s sexuality prevented him from playing a more visible and more influential role in the civil rights movement than the role of aide and adviser. He had a special intelligence, a political sophistication derived from decades of organizing for racial equality, African independence, and other causes. And he had a commanding platform presence, fortified by a remarkable tenor voice. Bayard didn’t have the Southern roots that enabled Dr. King and his preachers to connect with Black people in Mississippi, Alabama, and elsewhere in the region. But he understood the problems of Black people in the North far better than did other civil rights leaders. Bayard, in other words, could claim a level of personal charisma and political sophistication that few others in the civil rights protest movement possessed.

Ultimately, his sexuality kept him from playing a publicly visible role until after the March on Washington. Bear in mind that a major Black politician, Adam Clayton Powell Jr., the political boss of Harlem, was responsible for Bayard’s exclusion from King’s inner circle in 1960 by the simple act of threatening to circulate a fabricated story that Bayard and Dr. King were sexually involved. And during the 1950s, Bayard had been expelled from a leading pacifist organization after being arrested on a “morals charge” in a Los Angeles police sting operation. Even at the time of the 1963 march, moderate civil rights leaders who had worked with Bayard were unhappy when he was appointed as chief march organizer, because of his homosexuality. In this environment, A. Philip Randolph’s refusal to back away from his appointment of Bayard as organizer—and Bayard’s dignified response to the demagoguery of Senator Strom Thurmond on the subject—were impressive acts of principle.

How else do you think his sexual orientation influenced his work as a democracy and civil rights activist? When and how did Rustin become publicly active in advocating equal rights for the gay community?

During my stint with the Randolph Institute in the 1970s, Bayard devoted much of his time to international human rights and democracy projects. He was active in two of America’s foremost nongovernmental organizations, Freedom House and the International Rescue Committee. He led a delegation of prominent figures, including the actress Liv Ullmann, to the border that separates Thailand from Cambodia, during the height of the Khmer Rouge’s genocidal campaign. He was a tireless advocate for a generous American policy toward refugees fleeing communist rule in Southeast Asia. He spoke out against the steadily worsening political environment in Africa, which was increasingly dominated by kleptocratic leaders-for-life. He urged that Soviet Jews, the so-called refuseniks, be allowed to emigrate to Israel or the United States. And he organized a committee of prominent Black Americans to support Israel, at a time when the UN General Assembly had passed the infamous “Zionism is racism” resolution.

In that era, Bayard was not engaged in gay rights causes. The Stonewall Uprising took place in 1969, and it was unclear how much traction gay rights could command. And while Bayard had expanded his range of interests beyond race, the state of Black America remained his principal focus. He had to ask himself whether taking up the cause of gay rights would threaten his credibility as a leader of the civil rights movement during a period when its progress had been thwarted by the new Republican administration and a shift in public attitudes. Bayard’s involvement in gay rights issues really began after he met Walter Naegle, the man who was to become his partner, in the late 1970s, and it was further influenced by the AIDS epidemic.

How would you describe his understanding of the relationship between gay rights and human rights or democracy more broadly?

Bayard began his involvement in politics as a campus radical around 1930, and devoted the rest of his life to one cause after another, culminating in the civil rights protest movement. He came from a political environment in which it was not unusual for radicals to speak ironically or caustically about the American system, even using dismissive phrases like “bourgeois democracy.” But his years of experience taught him that democracy, especially elections and freedom of speech and the press, are essential to securing justice for members of minority groups. Bayard was a firm believer in the democratic process, including the tedious work of communicating with the public, gaining the support of people of influence, getting people out to the polls, engaging in peaceful protest.

Bayard had a special appreciation for American democracy. He believed that one of the civil rights movement’s achievements was to inspire other popular movements to make use of democracy in seeking equality. He also appreciated America as a place where a combination of collective action and self-emancipation could propel a movement for change forward. He was careful to avoid sweeping words of condemnation when talking about the United States. He never spoke of “racist America.” To Bayard, America was a country of possibilities, where you could always have another go if your cause was righteous.

What personal lessons did you glean from working with Rustin over the years? What can young people today learn from his career?

Bayard devoted over a half-century to political causes, from the fight against Jim Crow to peace to economic equality to global human rights. His years of experience taught him what worked and what didn’t work, and he was not reticent in challenging orthodoxies that had passed their sell-by dates. So the willingness to challenge so-called settled ideas, like the impossibility of equal rights for gay people, is lesson number one.

Lesson two is institutional responsibility, or what you might call stewardship. In its heyday, the civil rights movement was compelled to face decisions that were literally matters of life and death. People had to make difficult compromises and arrangements with unsavory figures. Bayard himself lost friends due to sharp disagreements when civil rights forces agreed to difficult concessions in the interest of the movement’s long-term success.

Lesson three is optimism. Bayard suffered many setbacks in a lifetime of political commitment, some personal and many political. I would urge readers to familiarize themselves with the events of the second half of the 1960s, when it appeared that race relations were in danger of unraveling, so soon after the protest movement’s greatest successes. The violence, raw hatred, the George Wallace phenomenon, the collapse of the national consensus around race—the events of 2020 pale in comparison.

These were setbacks for Bayard. But he recognized that Black people by that time already had the ballot, had an important platform to present their case, benefited from laws and legal doctrines, and had the ability to make ample use of the instruments of American democracy. There were Black congressmen, Black judges, Black journalists and intellectuals, and ordinary Black workers moving into jobs that were previously all White, or close to all White.

Bayard was among those rare individuals who believed that if your cause was just and you had access to the basic tools of democracy, your time would come. For gay people today who live in democratic settings, Bayard’s optimism has been validated with each new victory for equality.

Russia: Hold the Regime Accountable for War Crimes in Ukraine